Facebook wants to know how you're feeling and what you're doing 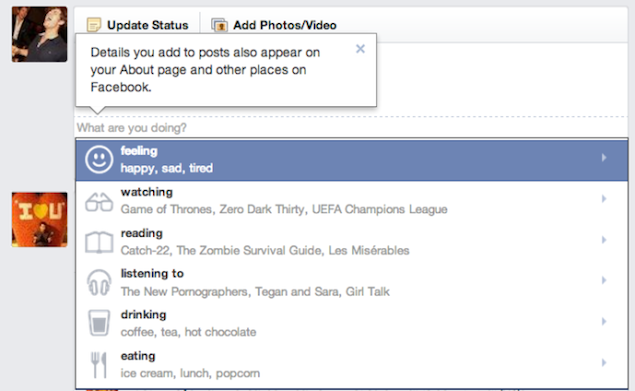 Facebook has started rolling out the option to share how you're feeling or what you're doing in the Facebook status update box, to users in the US. The development was first spotted by TechCrunch. The options offer drop down boxes featuring emoticons and activities such as watching, reading, listening to, drinking, and eating. After selecting an activity that involves media, the status update also includes an image and link to the content's Facebook Page. For instance you can now share that you're watching 'Game of Thrones' or reading 'The Great Gatsby' from a list that Facebook offers.

As we mentioned, Facebook has informed that it's rolling this feature out to more people in the US. So it's not clear whether it's still in a testing phase or Facebook will extend it to other regions, in the future.

Facebook also notifies users that the details they add to posts also appear on their About page and other places on Facebook. What this essentially means is that when you share data, Facebook could use it for recommending pages or showing ads. It would now be easier for Facebook to also use these with Graph Search that lets people trawl their network of friends to find everything from restaurants to movie recommendations in the future, although it had denied doing so when it first talked about the update in January with a select group of users. Users would be creating a lot of meta-data around their everyday habits and consumption.

With the move, Facebook would also be able to take on apps and services like Path, GetGlue and Goodreads as a lot of users post their activities to Facebook via these apps. They'll now be able to do the same with the Facebook app directly.

It's clear that Facebook wants to be an integral part of its users' daily life, as evident with the recent launch of Home, a home screen for Android phones where users get constant updates from Facebook on their phones. It had also started rolling out a major makeover of the home page where the News Feed presents bigger photos and links, including for advertisements, and lets users see specialized streams focused on topics like music and posts by close friends.

Further reading: Facebook, activity, emoticons, how you're feeling, status update, what you're doing