JioFiber Annual, 6-Month Plans Now Come With Extra Validity of Up to 30 Days 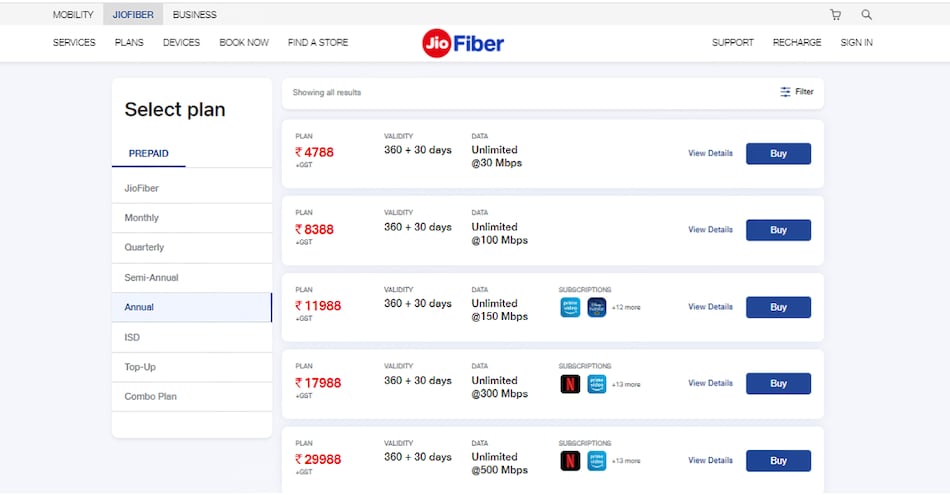 JioFiber plans are priced starting at Rs. 399 per month

First spotted first by Telecom Talk, this new JioFiber offer gives users to get 13 months of high-speed internet on the purchase an annual subscription in one go.

The offer is applicable for JioFiber Rs. 399, Rs. 699, Rs. 999, Rs. 1,499, Rs. 2,499, Rs. 3,999, and Rs 8,4999 monthly plans. All of these plans will award users with extra 30 days of validity if purchased for 12-months together. Similarly, if users purchase JioFiber semi-annual packs, i.e. plans with six months of validity, they will now be given additional 15 days— a total of 195 days validity. As of now, there are no benefits offered by Reliance Jio on quarterly or monthly JioFiber plan purchases.

JioFiber revamped its plans in August last year, offering users new options starting from Rs. 399 per month. The base plan offers unlimited upload and download speeds at 30Mbps, whereas the most premium plan priced at Rs. 8,499 per month offers 1Gbps upload and download speeds for up to 6,600GB of data and free subscription to apps like Netflix, Amazon Prime, Disney+ Hotstar VIP, Sony LIV, Zee5, Voot Select, and more.