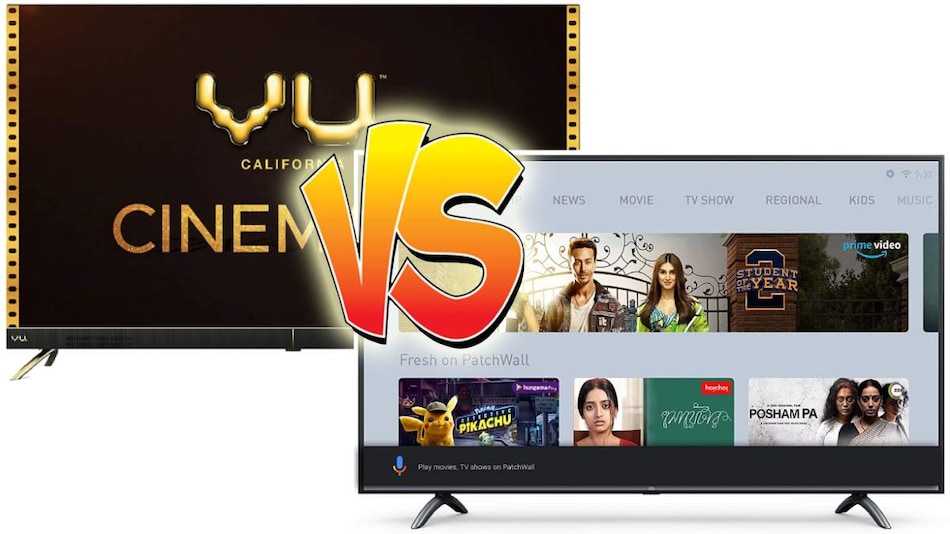 There was a time when modern features and specifications in televisions only came with high-end TVs from leading multinational brands such as Sony, Samsung, LG, and Panasonic. Things have since changed, and big-screen televisions with key features aren't quite as expensive anymore. Sure, you're still likely to see significantly better performance with premium options, but the most sought-after features and specifications are no longer the exclusive domain of the expensive brands. For less than Rs. 30,000, you can get a television that offers all the features that most people want.

Today, we're comparing two of the best options in this price segment that we've tested - the Xiaomi Mi TV 4X and Vu Cinema TV. Both of these televisions start at under Rs. 30,000, with sizes ranging from 43 inches to 65 inches. When it comes to features and specifications, these televisions have everything you need to properly enjoy the variety of content available today. We've compared these two affordable 4K TVs, and here's how they line up against each other.

Although the Xiaomi Mi TV 4X's starting price for the 43-inch variant is a bit lower, The Vu Cinema TV is at a slight price advantage at the 55-inch mark. Vu does not offer a 65-inch variant, so the Mi TV 4X is your only option at that size. All size variants across both televisions have 4K Ultra-HD resolution screens (3840x2160 pixels), with features and specifications standard across each range regardless of size.

Design isn't usually considered a big deal for televisions, since the focus needs to be on the screen. That said, some manufacturers do make the effort to add some styling to their televisions, and Vu has done a fair bit with the Cinema TV. This television has a substantial ‘chin' which holds the front-firing speakers. There are gold accents all around, and matching gold stands in case you table-mount the television. The gold Vu logo in the bottom left corner is quite conspicuous and eye-catching.

In comparison, Xiaomi has gone with a muted and simple look and feel for the Mi TV 4X. There are slim borders all around the screen including at the bottom, with a small module sticking out below the TV for the IR receiver. The TV has a simple black plastic body, and a small, easy-to-miss Mi logo at the bottom. The focus of the design of the Mi TV 4X is on the screen, and the high screen-to-body ratio makes sure your attention is right there.

The Mi TV 4X weighs a bit less than the Vu Cinema TV (when comparing the 50-inch variants of both). Both televisions use standard VESA wall mounts, and have table stands included in their boxes. The stands attach near the two corners of the TVs, so you'll need a wide enough table regardless of which one you pick of the two.

While both the Vu and Xiaomi options have Ultra-HD LED-backlit screens, a key difference is their support for different HDR standards. Xiaomi supports the 10-bit HDR10 standard for HDR content, while Vu supports the superior 12-bit Dolby Vision standard, which offers a slight step-up in terms of HDR performance. How useful this is to you depends on the content you watch, and whether you have access to Dolby Vision content.

Apart from Blu Ray discs, Netflix and Amazon Prime Video have large catalogues of HDR content. If you're on the top-tier plan on Netflix, you'll have access to Dolby Vision as well. Dolby Vision is the better of the two HDR standards in theory and practice, in our opinion.

When it comes to connectivity options, both TVs offer a similar level of competence, although the ports are a bit inconvenient to reach if you wall-mount in both cases. There are multiple HDMI and USB ports on both TVs, along with support for HDMI ARC (on a single port on each TV), along with standard 60Hz refresh rates on all HDMI ports as well as content played on the smart TV interface. You get 1.5GB of RAM and 8GB of storage on the Vu Cinema TV, while the Mi TV 4X has slightly more RAM at 2GB, along with 8GB of storage.

Xiaomi and Vu have completely contrasting approaches to remotes with the Mi TV 4X and Cinema TV. While Vu has gone for a traditional remote with many buttons and easy ways to access everything on the TV directly, Xiaomi has opted for a more minimalist option that reduces clutter. Both use Bluetooth so you can use them without needing to point them at the TV. Both also have microphones, allowing for voice commands to Google Assistant.

While the minimalist approach might make for a more conveniently sized remote, we preferred Vu's approach for the ability to control anything from the remote itself. The Vu Cinema TV's remote has hotkeys for Netflix, Amazon Prime Video, YouTube, and Google Play, apart from proper playback keys, a D-pad for navigation, Android TV navigation keys, and more.

The remote of the Mi TV 4X did have some useful buttons such as hotkeys for Netflix and Amazon Prime Video, but the lack of buttons for volume mute, source selection, and quick access to settings was bothersome to say the least.

Both televisions have Chromecast for video casting from compatible devices, along with HDMI-CEC compatibility for easy use with HDMI source devices.

Although both the Xiaomi Mi TV 4X and Vu Cinema TV run on Android TV 9 Pie, there are some differences in certain aspects of how the televisions function. The core experience is itself different on the two televisions for one key reason: the interface.

Both televisions have the stock Android TV interface, which looks and feels practically the same on either one. On the Vu model, this is the only launcher, but the Mi TV 4X also has a second interface which functions as a launcher: PatchWall. This is Xiaomi's trademark content curation platform, which presents content from various platforms in a tiled layout.

When it comes to actual functionality, the Vu Cinema TV is the better option for a couple of key reasons. The Settings menu on the TV is a bit more detailed, and many settings, including picture and sound, are accessible as an overlay while playing content through the smart interface or on an external device. Furthermore, Vu has a quick wake option which starts up the TV from standby in just a second.

In comparison, the lack of a Settings button on Xiaomi's remote means that you need to go to the Android TV home screen to access settings every time, which quickly got annoying for us. This TV also takes around 45 seconds to start up every time without exception, which is another problem.

As far as app support is concerned, both televisions support all the key content apps, including Netflix, Amazon Prime Video, YouTube, Hotstar, and more. Access to the Google Play Store for Android TV makes all major apps and services available on both TVs, with none of the major limitations (such as specific apps missing or blank screens when casting) that we've seen on some other Android TV devices.

As with pretty much any television regardless of budget, top-notch content brings out the best in these two models. At common screen sizes, 4K HDR or Dolby Vision content is more than good enough to ensure a pleasing viewing experience. However, Dolby Vision on the Vu Cinema TV gives it an edge over the Mi TV 4X when it comes to top-end performance; Dolby Vision content is brighter, more natural-looking, and more detailed than HDR10 content, in our opinion.

That said, the Xiaomi Mi TV 4X does perform well with HDR content, and can get quite sharp and bright if properly tuned. With standard dynamic range content, we found the Mi TV 4X to have oversaturated colours and poor black levels. With lower-resolution content, the TV suffered a fair bit when it came to motion and detail.

The Vu Cinema TV is an all-round performer that offers better picture quality across resolutions. We did notice some issues with motion, black levels, and inconsistent performance with standard definition content, but we found the Vu to be the better of the two overall.

Sound quality is another department where the Xiaomi Mi TV 4X falls short of the Vu Cinema TV. The Xiaomi television has 20W box speakers which we found average, but acceptable enough for the price. The Vu, on the other hand, is significantly louder with 40W of sound through its front-firing speakers. Due to the design of the speaker system, the sound was loud and wide, and Vu has done a decent job with tuning as well. Both televisions support the Dolby and DTS audio formats, but we found that the Vu Cinema TV was able to utilise this technology a bit better.

Vu and Xiaomi are among the most popular brands in the budget television segment today, and the increasing acceptance of buying a television online has helped these two brands gain some attention. In a direct comparison of the two companies' current ‘budget flagship' champions though, Vu comes out on top.

The Vu Cinema TV is the more capable of the two in every way. It's a little more affordable (for the 55-inch variant), supports Dolby Vision HDR, and offers better picture and sound quality. Although the Xiaomi Mi TV 4X looks a bit more sophisticated compared to the arguably excessive looks of the Vu, that's about it when it comes to advantages.

Both of these televisions are tremendous value for money, but the Vu Cinema TV offers better features, software, picture quality, and sound quality, and is therefore our pick between the two.