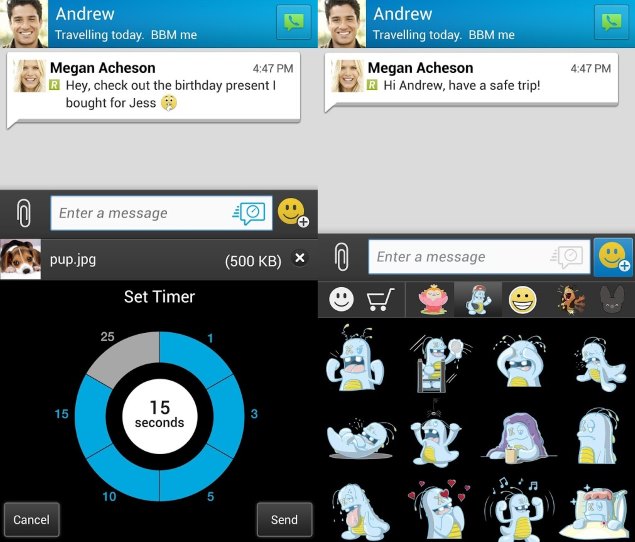 BlackBerry has rolled out an update for its cross-platform messenger app on Android, iOS, and BB10 OS with new features and improvements focusing on the user's privacy.

One of the highlights of the BBM app update is that users now have unlimited access to Retract a sent message and use the Timer feature, both which are features that were previously a part of the BBM subscription. "Building on the renowned immediacy, reliability and security inherent to BBM, the new release provides unmatched level of privacy and control to BBM users without any subscription fees," said Matthew Talbot, SVP, BBM at BlackBerry. "Keeping control over the messages and content that they share, BBM users can be ensured that what they share is always theirs to control."

Some of the other features that come as a part of an update to Android, iOS and BlackBerry 10 are free access to the Private Chat and Edit features. Private Chat feature removes names and avatars from the chat window, while Edit features lets you to edit the sent message. Forwarding messages from one chat to another has also been enabled. Besides these, general performance and bug fixes also come as a part of the BBM update.

On Android, the BBM update would enable users to mute notifications for multi-person chats, scroll through all pictures shared within a 1:1 or multi-person chat, and save pictures taken during BBM chat to device. Besides the Android 6.0 Marshmallow permission support, the update also brings improved BBM Voice call quality.

On iOS, the BBM update features an enhanced look for the chat screen, ability to capture and share larger videos with enhanced video sharing, multi-select mode to delete, retract, or forward multiple messages at once, improved BBM Voice call quality, and option to save pictures taken during BBM chat to device.

For the company's own BB10 OS, the latest BBM update would let users delete messages from just their view of the chat, retract and edit messages in group chats, and provide an option to retract all messages in a chat when it ends.

The company adds that if users are currently a BBM subscriber, their subscription may not end automatically when the app is updated. If the subscription was purchased on a different platform from the one they are currently using, they can cancel it via few simple steps mentioned in the company blog post.

While the BBM Android app update is available to download from Google Play, it is yet to reach iOS and BB10 OS.