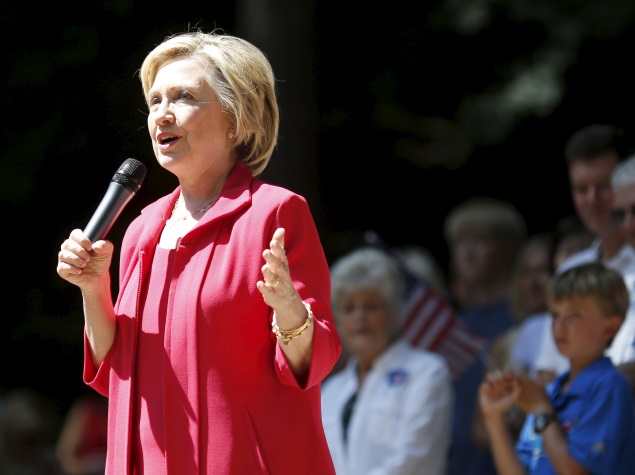 The game, which came out on July 6, encourages users to walk around and visit "PokéStops" where they can acquire items for the game like Poké Balls and "gyms" where they can fight against other players.

PokéStops and gyms are real locations in the real world.

"For instance, there's a gym on a small traffic island by the Vox DC offices and the Embassy of Iraq is a PokéStop and a reliable source of Poké Balls," news website Vox reported on Friday.

(Also see:  How to Play Pokemon Go in India? Here's Everything You Need to Know)

Another news website Cincinnati Enquirer reported that Clinton's Ohio staff spent the past weekend going "from Cuyahoga to Athens to seek out players in their communities to register them to vote".

There is even an official Hillary event scheduled in Lakewood, Ohio, pegged to the game.

"Join us as we go to the Pokestop in Madison Park and put up a lure module, get free pokemon, and battle each other while you register voters and learn more about Hillary Clinton," the description of the event reads.

Vox.com reported that Clinton campaign already has actual people registered to vote as a result of its Pokémon strategy.

Citing report from tracking firms TechCrunch reported that the game has not only topped Twitter and Facebook, but also have surpassed dating app Tinder in terms of installs.

"By July 7, the app had been installed on more Android smartphones than the dating app," Britain-based information technology firm SimilarWeb was quoted as saying.

SimilarWeb said Pokémon Go managed to surpass Twitter in terms of daily active users (100 million) on Monday and now sees 5.92 percent of the US Android population engaging with the app on a daily basis.

Pokemon Go: Only for the Brave in Lagos
Microsoft Woos Users to Edge Browser by Touting 1080p Netflix Playback