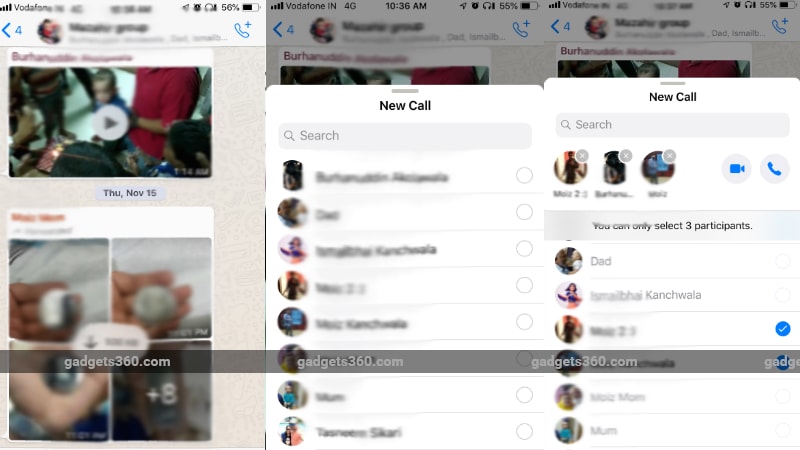 WhatsApp beta for iOS was recently reported to be testing video playback inside push notifications. Now, the social chat app has rolled out another update via TestFlight, and it brings along new group calling UI improvements. It enables users to start a group call with select members from a group directly via a new group calling button found inside group chats exclusively. This new button eases the group calling process that exists currently, where users are required to first make a video call to one person, and then add more people to the call by pressing the 'Add Participant' button on the top right.

The latest WhatsApp for iOS beta version 2.18.110.17 brings UI improvements for group calls. This improvement is only available for iOS beta users for now, and hasn't been made available to Android users yet, reports WABetaInfo. After installing the latest update via TestFlight, the new improvements can be seen in group chats. A new video call button now appears in group chats, and clicking on that, will open up a sheet with all the members of the group. The user can select up to three members they want to do a group call with, and then press the audio or video call button to start the group audio or video call immediately.

WABetaInfo reports that only users whose numbers are saved in your address book will show up on the new group call list. Therefore, group members whose number you haven't saved won't show on the sheet that allows you to select users for a group call. As the group calling limit has been set to four people maximum by WhatsApp, users can only add up to three people on the list.

Of course, only beta users will be able to see this feature for now, but WhatsApp should roll it out to all WhatsApp for iOS users soon. The latest update also brings fixes to issues where opening a chat unintentionally triggered haptic feedback, where GIFs stopped playing unexpectedly, and problems downloading Stickers Packs and sending Stickers. The update also fixed a bug that randomly added or dismissed users as an Admin in a group, fixed some localization issues when chatting with businesses, and it fixed some issues when searching for chats, contacts, and messages.