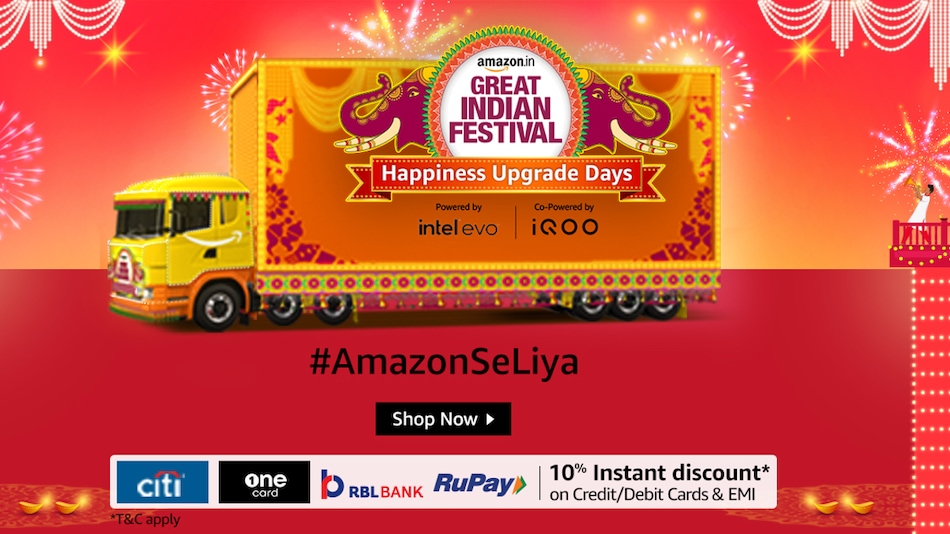 Amazon Great Indian Festival 2022 sale has already entered its second phase with the arrival of Amazon's 'Happiness Upgrade Days'. The e-commerce platform has not yet announced when its festive season sale will end, while it continues to offer discounts on a range of truly wireless stereo (TWS) earphones, from brands including, but not limited to: JBL, Boat, Oppo, Realme, Samsung, and Mivi. Amazon is also offering discounts coupons that you can use to further lower the prices on TWS earphones. You can also avail of a 10 percent instant discount on select cards during the Amazon Great Indian Festival 2022 sale.

During the ongoing Amazon Great Indian Festival 2022 sale, you can pick up the JBL C115 TWS earphones at Rs. 2,799 (MRP Rs. 8,990), a discount of nearly 70 percent. These earbuds are equipped with 5.8mm drivers and support Bluetooth 5.0 connectivity. They support both mono and stereo connectivity, which means you can use one earbud while the other is charging in the case. They are claimed to offer up to 6 hours on the earbuds and up to 15 hours with the charging case. Charging these earbuds for 15 minutes offers one hour of playback, according to the company.

The Oppo Enco Buds are another affordable pair of TWS stereo earphones you can purchase at a discounted rate during Amazon's sale. They are currently priced at Rs. 1,299 (MRP Rs. 3,999) and feature a double-layer composite diaphragm that is claimed to offer better bass response. Oppo says these earbuds will offer up to 6 hours of battery life for each earbud and 24 hours with the charging case. The earbuds come with Dolby Atmos support and environmental noise cancellation that is claimed to reduce disturbance while calling. They also have an IP54 rating for dust and water resistance.

With up to 42 hours of playback time, including the charging case, the Boat Airdopes 141 TWS earbuds should make a good companion for people on the go. However, you still get 6 hours of battery life on each earbud, which is similar to other products that are also discounted during the ongoing sale. These TWS earbuds are claimed to offer 75 minutes of playback on a 5 minute "ASAP Charge". They also have an Insta Wake N' Pair technology that connects the earbuds to your device as soon as the case is opened, according to the company.

Equipped with 13mm electrodynamic drivers, the Mivi DuoPods A350 are claimed to offer a bass heavy sound output. These TWS earphones are currently priced at Rs. 799 (MRP Rs. 2,999) and are available in three metallic shades, and are claimed to feature 8.5 hours of playback on each earbud, along with 50 hours of playback. The company says that the 500mAh battery in the case can charge the earbuds up to five times. They also come with Google Assistant and Siri support, through the earbuds.

The Realme TechLife Buds T100 TWS earbuds feature 10mm dynamic bass drivers, and feature an AI environmental noise cancellation feature for voice calls. They are claimed to offer up to 28 hours of playback with support for fast charging. Realme's TWS earbuds also boast 88ms low latency mode which is aimed at gamers. They also feature support for Google Fast Pair, allowing you to open the case to automatically pair with your Android smartphone.

Unlike the in-ear design sported by the other TWS earphones listed here, the Samsung Galaxy Buds Live earbuds feature a "bean" shaped design. They also come with support for active noise cancellation. The earbuds are equipped with 12mm drivers that are tuned by AKG, and a bass duct for improved lower frequency response. The Samsung Galaxy Buds Live support touch controls, and are available in three colour options. They support seamlessly switching between Samsung devices, according to the company.