The Oppo Enco X2 has been tuned in collaboration with Danish loudspeaker maker Dynaudio. 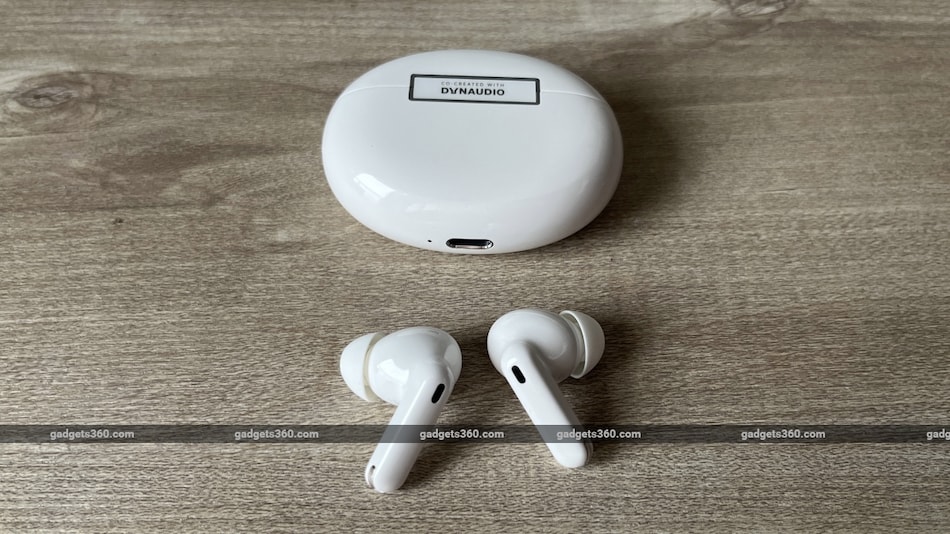 Mainstream true wireless earphones typically fall in the price range from around Rs. 1,000 to well over Rs. 20,000. Naturally, spending more will get you better audio performance and advanced Bluetooth codec support, as well as features such as active noise cancellation and wireless charging. Recent months have seen many budget and mid-range focused brands offer serious value for money with their launches, making it possible to get flagship-grade performance and features at reasonable prices. The product I'm reviewing here promises exactly that.

Priced at Rs. 10,999 in India, the Oppo Enco X2 has a dual-driver setup with dynamic and planar magnetic drivers, advanced Bluetooth codec support, and tuning in collaboration with Danish loudspeaker maker Dynaudio. On paper, this should be a capable offering for the price that challenges the premium TWS segment in a big way, but can it deliver the value it promises? Find out in this review.

Unsurprisingly, the Oppo Enco X2 draws much inspiration from its predecessor, the Oppo Enco X, but there are subtle changes that set the two headsets apart. Some of these changes mean that the earpieces of the X2 strongly resemble the Apple AirPods Pro, particularly the contrasting black accents around the inner and outer microphones. Additionally the controls are now partly force-touch, much like the controls on the AirPods Pro, and the stems of the earpieces are also roughly the same length.

With the rather obvious design cues out of the way, the Oppo Enco X2 does have some notable features which are true to its identity. The ‘L' and ‘R' markings on the earpieces are actually cutouts of the casing like on the Oppo Enco Air 2 Pro with the inside microphones placed in the gaps. Although there are no Oppo logos on the earpieces, there is a distinct one on the charging case, along with the Dynaudio badge that is a notable characteristic of the headset.

The earpieces of the Oppo Enco X2 have force touch controls, which I found to be far more precise than the simple touch controls on the Enco X headset. These controls are customisable through the app for the Enco X2. The fit of the ear buds are comfortable for long listening sessions, and offer decent noise isolation. The headset is available in two colours in India, white and black, and is IP54 rated for dust and water resistance.

The charging case of the Oppo Enco X2 is somewhat wide, but fairly slim and easy to keep in your pocket nonetheless. The USB Type-C charging port is at the bottom, the pairing button is on the right side, and there are indicator lights at the bottom and under the lid. There is Qi wireless charging, but this oddly requires you to place the charging case on its front with the Dynaudio logo facing up. This took a bit of learning for me, but wasn't really inconvenient on the whole.

When it comes to features, the Oppo Enco X2 is quite impressive for a true wireless headset in this price range. Apart from the core features of active noise cancellation and app support, there is interestingly also bone conduction technology for the microphones for voice pick up, Dolby Audio binaural recording when using the Enco X2 as the recording microphone, and dual-device simultaneous connectivity. The sales package has a charging cable and a total of three pairs of silicone ear tips of different sizes, for a customisable fit.

As with many other Oppo and OnePlus true wireless headsets, the Enco X2 works with the HeyMelody app. Usefully, the app supports the earphones on both Android and iOS, unlike on the Enco X which only worked with the Android app. Interestingly, when used with certain devices from Oppo and OnePlus, the Enco X2 doesn't need the app at all as all app-based settings and customisation features are visible in the system Bluetooth settings for the earphones.

In my case, I used the app for connectivity with an iPhone, and was able to access the native settings when the Oppo Enco X2 was connected to a OnePlus 9 Pro (Review). The latter had all the settings available in the app, and was in fact better presented through the native Bluetooth settings on the smartphone.

On select Oppo and OnePlus smartphones, the Enco X2's settings are natively built into the Bluetooth menu itself

Coming to the functionality itself, there are various ways to tweak the experience on the Oppo Enco X2. This includes three modes of intensity for the ANC, transparency mode, sound customisation, dual connection, and customisation of the controls, among other things. Individual functions can be assigned to s single, double, or triple squeeze on each earpiece, as well as the slide gesture.

It's possible to create a setup to simultaneously control playback and volume, invoke the voice assistant, and toggle between ANC and transparency modes, all through the earpieces. There are also four equaliser presets, including three by Dynaudio, to set the sonic signature according to your liking. I didn't like the Dynaudio presets too much, and preferred the Classic Enco X preset which ensured balanced and detail-oriented sound.

The Oppo Enco X2 has a dual-driver setup, with one 11mm dynamic driver a second 6mm planar magnetic driver in each earpiece, which is quite unique for a true wireless headset. The earphones have a frequency response range of 20-40,000Hz. As mentioned earlier, Oppo has collaborated with Danish loudspeaker manufacturer Dynaudio to tune the sound on the Enco X2.

For connectivity, the Oppo Enco X2 uses Bluetooth 5.2, with support for the SBC, AAC, and LHDC Bluetooth codecs. During my review, a firmware update for the earphones also introduced LDAC Bluetooth codec support to the headset, but when used with my OnePlus 9 Pro, the Enco X2 favoured the LHDC Bluetooth codec for high-resolution audio operation. Apart from multipoint connectivity for up to two devices simultaneously, there is also Google Fast Pair support on the Oppo headset.

The Oppo Enco X2 is priced in the mid-range segment, and you wouldn't be wrong to assume it competes with options such as the OnePlus Buds Pro and Samsung Galaxy Buds 2. However, Oppo's audio department has typically pushed the boundaries of value and what you can expect at a certain price, and the Enco X2 far exceeds expectations when it comes to sound quality.

This is, in large part, thanks to the novel driver setup, as well as the advanced Bluetooth codec support which is rare to see at around Rs. 10,000. When used with the OnePlus 9 Pro and with the LHDC Bluetooth codec in operation, the Oppo Enco X2 delivered audio performance that matched what I've heard on flagship headsets such as the Sony WF-1000XM4 and Sennheiser Momentum True Wireless 3, both of which cost considerably more money than the Enco X2.

The sonic signature on the Oppo Enco X2 was balanced for the large part, giving sounds across the frequency range due attention. However, the dual-driver setup did make for a very audible split in the sound, and I tended to hear a fair sense of separation in the lows. This ensured tight bass, particularly when listening to fast tracks such as The Great Divide (Soundprank Remix) by Velvetine. The attack felt firm and strong, yet never too much; the planar magnetic driver almost seemed to be in healthy competition for attention.

This brings me to the rest of the frequency range, particularly the mids and highs. Although the punchy beats and sparkling highs fought for bragging rights, there was plenty of room for the upbeat vocals to be heard cleanly in this fast electronica track. This was the case even with tracks with vocal-focused sound, such as Stay With Me by Calvin Harris. Halsey's rather catchy hook and Justin Timberlake's sheer energy and nuance in the track sounded impressive, and largely on par with what I'd hear on flagship true wireless earphones.

The presence of two drivers in each earpiece also meant that the Oppo Enco X2 had no trouble working with the additional data on offer thanks to the LHDC Bluetooth codec. The earphones felt fast-paced, cohesive, and entirely capable of handling even the most challenging assignments.

All of this came through with impressive levels of detail; the mystifying and beautifully put together Wherever You Go by The Avalanches was handled superbly by the Oppo Enco X2. The earphones offered a punchy, yet refined and calculated reproduction of the track, slowing down and picking up the pace and energy almost intuitively.

Active noise cancellation on the Oppo Enco X2 wasn't quite as ‘segment-defying' as the sound quality, but was decent for the price nonetheless. Although there are three separate ANC modes of varying intensity, I found barely any discernible difference between them, and tended to stick to just the ‘Max' level.

ANC performance was better indoors than outdoors, showing particular effectiveness against air conditioning and the general hum of the office space. Outdoor sounds weren't as effectively blocked out, although it did make a fair difference when when walking on the street as listening to music was a bit easier.

Call quality and voice recording on the Oppo Enco X2 were very good, as the microphones did a particular good job of capturing clear audio. Connectivity was stable even with the LHDC codec in operation at distances of up to 4m between the earphones and the paired smartphone.

Battery life was acceptable for me, with the earphones running for around four hours on a single charge with ANC on, moderate volume levels, and the LHDC Bluetooth codec in operation. The charging case added three additional charges to the earpieces, for a total run time of 16 hours per charge cycle.

Oppo's approach to the TWS segment has been adventurous and path-breaking to say the least, and the Enco X2 is an impressive pair of true wireless earphones in many ways. The design, feature set, and performance of this headset are all exceptional for the asking price, and the Enco X2 is a legitimate competitor to flagship true wireless headsets at around half the price. Apart from somewhat average battery life, there isn't much else to complain about here.

Although many might want to consider options from Samsung and OnePlus in this price range, the superior features and codec support puts the Oppo Enco X2 ahead of similarly priced competition. Similarly, iPhone users won't really benefit from the codec support, but good tuning and app support does cover for it to an extent. If you're an Android user, there really is no better pair of earphones under Rs. 15,000 than the Enco X2 that you can buy right now.