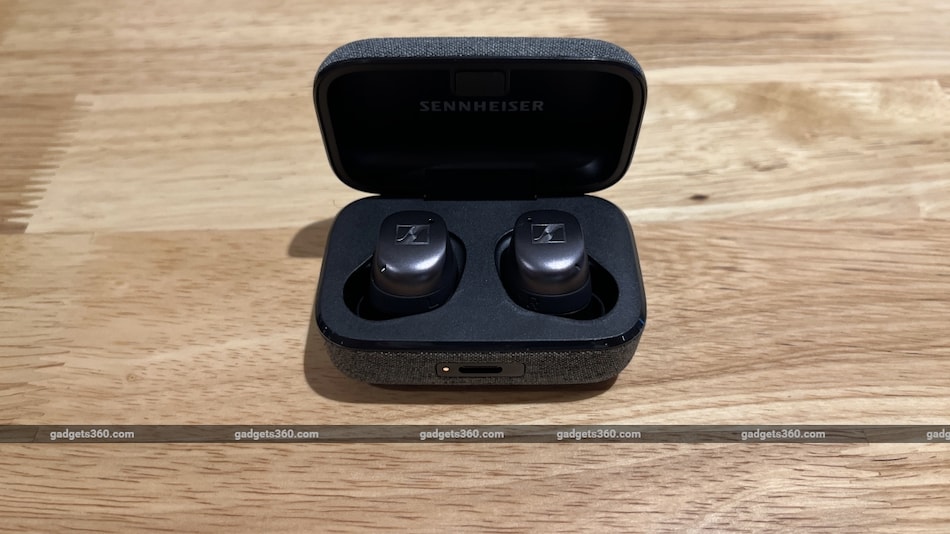 The Sennheiser Momentum True Wireless 3 headset is priced at Rs. 21,990 in India.

Today's flagship true wireless earphones are held to the highest standards of design, performance, and functionality, and only a handful of brands have truly stood out in this segment for delivering the kind of products that people would be willing to pay over Rs. 20,000 for. One of the first brands to offer a genuine winner of a product in this space was Sennheiser, with the Momentum True Wireless earphones. Recently, we have seen Apple and Sony jump ahead, but Sennheiser hasn't taken this lightly and has now launched the Momentum True Wireless 3 earphones in India, to take on the Sony WF-1000XM4 and Apple AirPods Pro.

Priced at Rs. 21,990, the Sennheiser Momentum True Wireless 3 promises improvements over the Momentum True Wireless 2 which was launched in mid-2020. With an improved design, support for the aptX Adaptive Bluetooth codec, and a promise of better sound and ANC performance, is this the best flagship true wireless headset you can buy right now? Find out in this review.

Fortunately, this hasn't taken away from anything else when it comes to design; the Sennheiser Momentum True Wireless 3 is a good-looking pair of earphones. The earpieces have a large and distinct Sennheiser logo on their flat outer surfaces, small ear wings to aid in getting a good fit, and silicone ear tips that have a layer of foam across the openings. The logo area is touch-sensitive for controls, which are customisable through the app. The flat, large surface made it particularly easy to use these touch controls.

The charging case of the Sennheiser Momentum True Wireless 3 is among the best I've come across, with a fabric-wrapped exterior and a convenient size and shape that's easily pocketable. It has a USB Type-C port and supports Qi wireless charging. There is no pairing button on the case (the earphones enter pairing mode through touch controls), and interestingly, the USB Type-C charging port is on the front of the case, alongside the indicator light.

Included in the sales package are four pairs of silicone ear tips, three pairs of ear wings, and a charging cable. The earpieces are IPX4 rated for water resistance, and each earpiece has three microphones for voice and ANC functionality.

The earpieces weigh 5.8g each, while the charging case weighs 66.4g. The Smart Pause feature which is supposed to automatically play and pause music when either earpiece is worn or taken off, didn't work too well for me. It often continued to play music even when one or both earpieces were not in my ears. The Momentum True Wireless 3 is available in two colours in India at launch, Black and Graphite (my review unit), with a third White colour expected to be available later.

As with all of Sennheiser's high-end wireless products, the Momentum True Wireless 3 works with the Sennheiser Smart Control app, available on iOS and Android. This is among the best apps I've used for headphone management, giving access to controls and settings for the equaliser, transparency and ANC modes, touch controls, and more. You can also update the firmware, activate or deactivate Smart Pause and Auto-accept Call functionality, and set a time for the earphones to automatically power off when not in use.

Control customisation on the Sennheiser Momentum True Wireless 3 is particularly good, allowing for specific functions to be set for various gestures including one tap, two taps, three taps, and tap-and-hold, with separate functions assignable to each earpiece for each gesture. I was able to create a set of controls that allowed for playback, active noise cancellation, invoking the voice assistant, and volume – to all be controlled directly from the headset. This is considerably better than what's offered on most other premium true wireless headsets.

The Sennheiser Momentum True Wireless 3 is powered by 7mm dynamic drivers, and has a frequency response range of 5-21,000Hz and a sensitivity rating of 107dB. The earphones use Bluetooth 5.2 for connectivity, and support the SBC, AAC, and aptX Adaptive Bluetooth codecs.

The pricing and positioning of the Sennheiser Momentum True Wireless 3 puts it in direct competition with the Sony WF-1000XM4 and Apple AirPods Pro, both of which cost around Rs. 25,000. However, support for the aptX Adaptive codec makes the Momentum True Wireless 3 headset better suited to use with Android smartphones, and thus makes it more of a direct competitor to the WF-1000XM4.

I used the Sennheiser Momentum True Wireless 3 with an iPhone as well as multiple Android smartphones to test how the various supported codecs played a role in sound quality, and results were expectedly best with aptX Adaptive in operation. Listening to Glitter by Keys N Crates, I was immediately impressed with the wholesomeness of the sound; the lows felt tight and strong without becoming overbearing, while the vocals were clean and distinct even against the beautiful melody that defines this track.

It's this all-round balanced and genre-agnostic sonic signature that defined the listening experience with the Sennheiser Momentum True Wireless 3 for me, and proved that good tuning goes a long way in determining the quality of a pair of earphones. At moderate volume levels, whether with faster tracks such as The Great Divide by Velvetine or slower numbers such as Truth by Kamasi Washington, the Sennheiser earphones seemed to flexibly adapt to the pace and complexity of the music.

The progressive jazz track, Truth by Kamasi Washington, also showed just how detailed and revealing the sound was on the Sennheiser Momentum True Wireless 3, as the headset was able to keep up with all the various instruments while maintaining a beautiful soundstage that gave each individual element of this hypnotic track a chance to shine. From the spacious-sounding percussion to the grunt in the double bass, everything sounded distinct and crisp.

That said, I felt that the earphones weren't as analytical and revealing as the LDAC-enabled Sony WF-1000XM4. However, the aptX Adaptive codec did seem to make up for this with its flexibility and ability to add some flavour and character to the sound, because of the way it works with a considerably lower bitrate than LDAC. Even with the older and less flexible aptX codec, the sound remained enjoyable, although I did detect a notable reduction in detail and spaciousness.

This tendency to add some character to the sound meant that the Sennheiser Momentum True Wireless 3 felt a bit less strong tonally than competing options, and I even occasionally felt a bit of weakness in its cohesiveness. However, it took a lot to rattle the Momentum True Wireless 3, which largely succeeded in delivering detail, flavour, and enjoyability across genres.

Active noise cancellation on the Sennheiser Momentum True Wireless 3 was very good, and arguably better than what its direct competitors from Apple and Sony can manage in some situations. Noise cancellation against wind was particularly good, and this made for very effective ANC for outdoor ambient sounds and the wind noise of a ceiling fan.

Regardless of whether indoors or outdoors, the earphones offered a significant reduction in noise that often made for the kind of stark silence you usually get only with high-end, over-ear headphones. Connection stability and call quality were also very good on the Sennheiser Momentum True Wireless 3, and I didn't face any major issues in this regard during my time with the earphones.

Battery life on the Sennheiser Momentum True Wireless 3 was pretty good. The earpieces ran for a little under six hours per charge, and the charging case added three additional full charges. This made for around 23 hours of total runtime per charge cycle with ordinary use, including having ANC enabled most of the time, the aptX or aptX Adaptive codecs in operation, and the volume at around the 60 percent mark.

The high price of flagship true wireless headsets might still be a barrier for most buyers in India, but if you have the budget, the rewards are really worth it. The Sennheiser Momentum True Wireless 3 is a fantastic pair of true wireless earphones, combining good, detailed sound with a sense of character and flair, excellent ANC performance, a much-improved design, and decent battery life.

The lack of support for the LDAC Bluetooth codec means that the sound isn't quite as precise and analytical as that of the Sony WF-1000XM4, which in my opinion, is the only competing headset that you could consider over the Sennheiser Momentum True Wireless 3. If you're using an Android device that supports aptX Adaptive and you prefer your audio to sound a bit ‘tweaked', the Momentum True Wireless 3 is worth a look. Good active noise cancellation is another bonus. If you're using an iPhone, you'll likely be better served by the AirPods Pro thanks to its superior connectivity features and support for Spatial Audio.