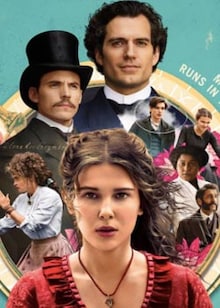 Sherlock Holmes’ (Henry Cavill) teen sister Enola (Millie Bobby Brown) discovers her mother is missing and ventures about to find her. Although the first time ever outside her home, all by herself, she outwits her famous elder brother and unravels a dangerous conspiracy-- credit to the training her mother has been giving her all this while. In the process, Enola becomes a super-detective in her own right, to the say the least, as she makes her way in a wealthy Victorian England. The concept of the new Netflix original Enola Holmes sounds like the Hollywood machine in overdrive: what if Sherlock Holmes had an equally-smart teenage sister? But it's in fact based on the eponymous best-selling young-adult book series (published between 2006 and 2010) from American author Nancy Springer. And its Netflix adaptation — made by an all-British cast and crew, as is fitting the setting — is a jolly, family-friendly outing, though it's not particularly ambitious. Its convoluted plot doesn't have the intrigue of a story befitting the Holmes moniker. Instead of showcasing its titular heroine's deductive reasoning powers, Enola Holmes seems more interested in her physical abilities. In doing so, it becomes more Robert Downey Jr. Sherlock Holmes than Benedict Cumberbatch Sherlock.