All the major trailers from Comic-Con 2022 in one place. 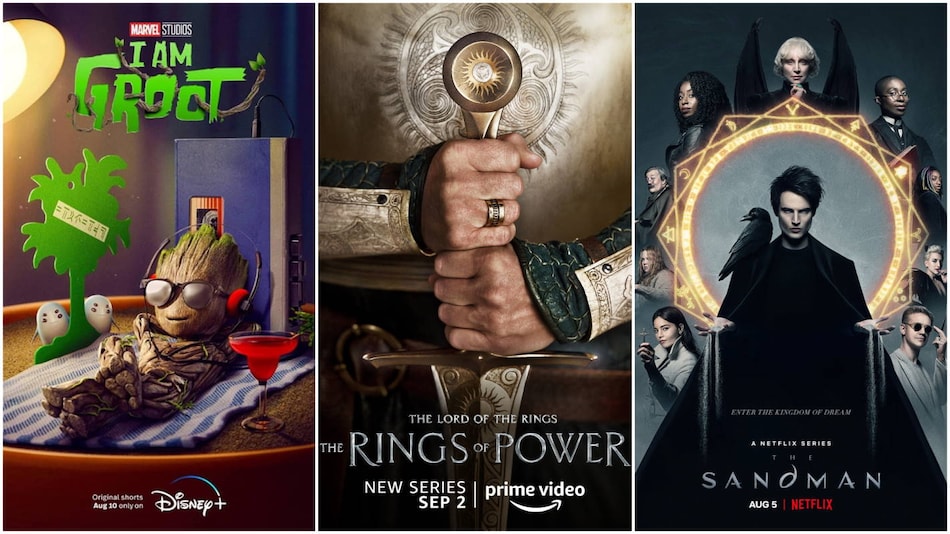 I Am Groot, The Lord of the Rings: Rings of Power, and The Sandman

Comic-Con 2022 was a blast, bringing all-new trailers and announcements for your favourite pop culture franchises. This year's event lasted four days — with a live, in-person audience and hundreds of panels scattered throughout the venue in San Diego, California. The last couple of years saw Comic-Con succumb to a digital, online-only presentation, thanks to the ongoing COVID-19 pandemic. Key highlights this time include trailers for The Lord of the Rings: The Rings of Power, Black Panther: Wakanda Forever, Shazam! Fury of the Gods, Black Adam, and John Wick: Chapter 4.

For your convenience, we have listed below the biggest film and TV series trailers from San Diego Comic-Con 2022.

A small screen adaptation exploring the lore from J.R.R. Tolkien's books has been in the works at Amazon Prime for five years now. As a prequel, The Lord of the Rings: The Rings of Power explores the Second Age — an era where great powers were forged and kingdoms rose to glory. Fans could also expect to see the origin of Sauron — one of the greatest fantasy villains ever penned by Tolkien.

The much-awaited sequel from Ryan Coogler marks the end of Marvel's Phase 4 — shining light on some side characters from the world of Black Panther, while honouring Chadwick Boseman's legacy. Black Panther: Wakanda Forever will not see the return of W'Kabi, played by Daniel Kaluuya, due to scheduling conflicts with his upcoming Jordan Peele film, Nope.

Lionsgate unveiled a new teaser for John Wick: Chapter 4, starring Keanu Reeves as the titular hitman. The movie sees his return into the brutal world of deadly assassins, as he teams up with Bowery King (Laurence Fishburne) and prepares to take on the High Table — who betrayed him previously.

Disney+ has released a new trailer for She-Hulk: Attorney at Law starring Tatiana Maslany as the titular bulky, green-hued superhero. Prior to this, the show received some flak online, with respect to the appalling CGI being used in the live-action series. The new trailer also reveals more about mentor Mark Ruffalo as the Hulk, hints at some fourth wall-breaking scenarios, and a small tease for Daredevil.

The David F Sandberg-directed sequel, Shazam! Fury of the Gods sees returning cast learning to live with their newfound powers, as we see Zachary Levi attending a therapy session. Events are made worse by the arrival of the Daughters of Atlas, played by Lucy Liu (Kill Bill: Vol 1), Helen Mirren, and Rachel Zegler (West Side Story). There is a lot of banter and cheeky references to the likes of Annabelle and Starro: The Conqueror.

Another character on this list to be freed from imprisonment, Dream aka The Sandman makes his first live-action appearance via Netflix. Created by Neil Gaiman, the dark fantasy title follows Tom Sturridge as the personification of dreams, embarking on a treacherous journey to find and reclaim his totems of power — a pouch of sand, a helm, and a ruby. This adaptation is set in the modern world and features minor sex and timeline changes when compared to the original graphic novels.

As an emotional conclusion to the intergalactic story, Paramount has unveiled the trailer for the third and final season of Star Trek: Picard. The minute-long clip does not reveal much, besides reuniting Patrick Stewart with the cast of The Next Generation, featuring individual voiceovers. Paramount+ also gave us a trailer for the third season for the Star Trek animated series, Lower Decks.

As long as you remain steadfast, you are never without hope. #StarTrekPicard concludes with Season 3 in 2023, exclusively on @ParamountPlus. pic.twitter.com/MD2TTRi0gY

Marvel's latest offering, set to premiere on Disney+ Hotstar, explores the life of Flora colossus, Groot as a baby. Voiced yet again by Vin Diesel, the trailer shows the hero of few words getting into all sorts of adorable intergalactic mischief and discovering new powers as he interacts with critters from the far reaches of the galaxy. The five-short series will be produced by Guardians of the Galaxy writer-director, James Gunn.

Based on the popular tabletop role-playing game, Dungeons & Dragons: Honor Among Thieves follows a group of ragtag misfits led by Chris Pine, as they venture into the lands unknown in search of an ancient relic. Long-time fans will recognise a ton of traditional elements including gelatinous cubes, mimics, magical warriors, displacer beasts — and what good is a fantasy tale without dragons?