The Lord of the Rings: The Rings of Power New Trailer Revealed at San Diego Comic-Con

The trailer introduces a group of Harfoots, nomadic ancestors to the hobbits of Lord of the Rings. 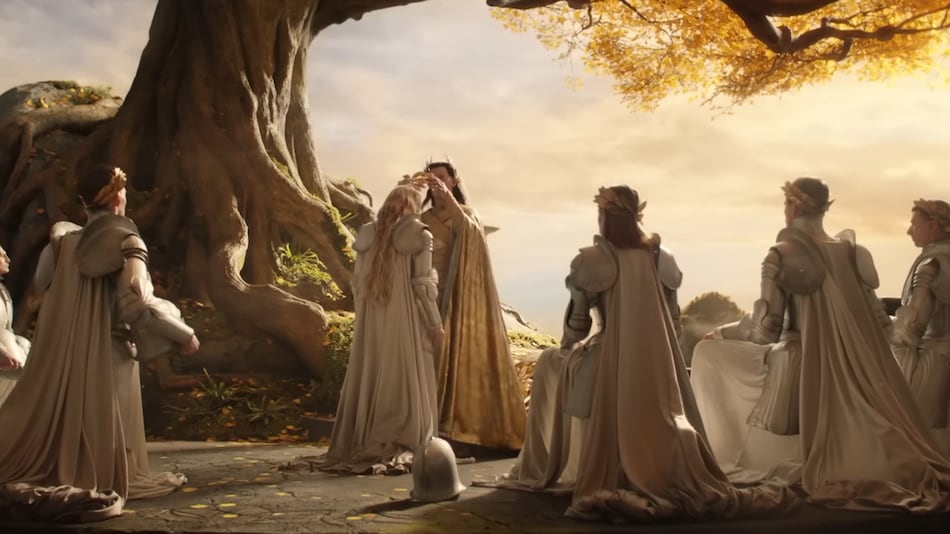 The Lord of the Rings: The Rings of Power will premiere on September 2

Nomadic hobbits, bearded female dwarves and enslaved elves — Amazon finally lifted the lid on its highly anticipated Lord of the Rings: The Rings of Power TV series at Comic-Con on Friday.

The enormously ambitious small-screen saga set in the world of J.R.R. Tolkien's books has been in the works since Amazon Prime bought the rights for $250 million (roughly Rs. 1,996 crore) almost five years ago.

Fans, many of whom camped in line overnight at the world's most famous pop culture gathering, were treated to a first look at footage, plus interviews with the creators and a 21-strong cast of hobbits, dwarves and elves in a packed presentation hosted by comedian and Tolkien-enthusiast Stephen Colbert.

"As fans and as viewers and lovers of Middle Earth and Tolkien, we didn't want to do a side thing, or a spin off, or the origin story of something else," said co-creator Patrick McKay.

"We wanted to find a huge Tolkienian mega epic. And Amazon were, wonderfully, crazy enough to say 'yes, let's do that.'"

Amazon is reportedly spending more than $1 billion to make five seasons -- each running for 10 hours -- the first of which launches on its streaming platform September 2, and which "reintroduces" Tolkien's world of Middle Earth, said McKay.

Younger versions of elves Galadriel and Elrond — familiar characters to fans of Peter Jackson's Oscar-winning Lord of the Rings trilogy — will be played by Morfydd Clark and Robert Aramayo.

But with the new TV show set 4,000 years before Jackson's trilogy, in a fictional "Second Age" — a historical period sketched out in less detail by Tolkien's writings — the creators had license to create many new characters.

"Amazon bought the rights to basically 10,000 years of Middle Earth history and said, 'Alright guys, let's take all comers and see what you have to say.'

"We felt that the Second Age is freaking awesome. It's Tolkien's amazing, untold story, that is so iconic with the forging of the Rings of Power."

The series is said to be a personal obsession of Amazon founder Jeff Bezos, and represents the company's biggest play yet in the so-called "streaming wars" with rivals including Netflix and Disney+.

Much of that cost went into lavish production values, evident to fans packed into the San Diego convention centre's 6,000-capacity Hall H, where they were treated to five clips from the show, plus a new trailer.

Though plot details remain under wraps, sprawling and intricately detailed settings from the books, including the island kingdom of Numenor — projected onto a giant screen wrapping around-three quarters of the arena — drew audible gasps.

"We built an entire city with several blocks and an entire wharf — it's crazy and enormous," said McKay.

"We built as much as any group of humans could," added executive producer Lindsey Weber.

One clip during the 90-minute presentation introduced a group of Harfoots, nomadic ancestors to the hobbits of "Lord of the Rings," who live in travelling carts rather than holes.

Another showed a wealthy dwarf kingdom — complete with the saga's first bearded female dwarves — and a third clip found a group of elves in chains, forced to work for a gang of evil orcs.

"We have gone with a version, a gorgeous, regal, one-hair-at-a-time application, divine, detailed version of a beard for the female dwarf, and I know you're gonna love it!"

'Thrones' and zombies Comic-Con is taking place in-person and at full 130,000-strong capacity again for the first time in three years, after going online due to the pandemic.

The Rings of Power is going head-to-head at the event with HBO's Game of Thrones spin-off House of the Dragon, a rival fantasy series out next month, which gets its own Comic-Con presentation Saturday.

Elsewhere, post-apocalyptic zombie series The Walking Dead had its final Comic-Con presentation Friday, where it was confirmed that the record-breaking cable show's final eight episodes will debut October 2.

But the undead franchise lives on, with fan favourite Andrew Lincoln telling ecstatic fans he will reprise his role as Rick Grimes for a limited series next year.

And Disney will wrap up the event's major presentations Saturday evening with a presentation expected to feature its Marvel superheroes, including the eagerly awaited sequel "Black Panther: Wakanda Forever."