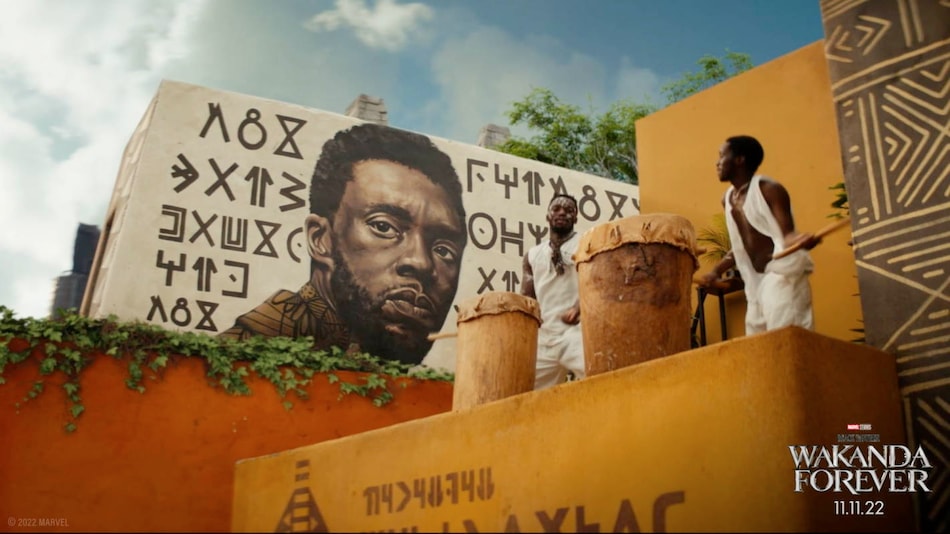 Black Panther: Wakanda Forever first trailer is here — in English, Hindi, Tamil, Telugu, Kannada, and Malayalam. Marvel Studios revealed the teaser trailer for the much-anticipated sequel during a San Diego Comic-Con 2022 panel. Ryan Coogler had written the sequel, keeping the lead Chadwick Boseman in mind. But, following the actor's demise in 2020 due to colon cancer, he was forced to figure out a way to continue the story, all while honouring Boseman's legacy. Black Panther: Wakanda Forever is set to release in theatres worldwide on November 11.

The Black Panther: Wakanda Forever trailer has a musical vibe to it, as we hear a female vocalist singing a sombre cover of Bob Marley's ‘No Woman No Cry.' Following the aftermath of Avengers: Endgame, we are then shown quick shots of the new Wakanda regime, with Ramona (Angela Bassett) as the Queen of Wakanda, a rival tribe, and a house on fire. Details on the plot are not clear, though as Marvel has teased previously, Black Panther: Wakanda Forever will explore the world and character aspects that were introduced in the 2018 film.

Citizens of Wakanda seem to be at war in Black Panther: Wakanda Forever trailer with two factions — a neighbouring tribe covered in blue paint, and some external armed forces who infiltrate the exotic lands. Everett Ross (Martin Freeman) returns, as he joins forces with War Dog Nakia (Lupita Nyong'o) to forge a new path for the kingdom. We are also treated to short glimpses at Namor, the Sub-Mariner — played by Tenoch Huerta — who is a mutant-hybrid, born out of a human father and an Talocan princess.

Canonically, we were supposed to get a face-off between T'Challa and Namor. But following Boseman's death, this MCU storyline hangs aloof — for now. Before the title card is revealed, we get a quick look at a new Black Panther suit, covered with golden lines instead of white, though there is no word one who will be replacing the actor. The trailer also features a small blink-and-you-miss-it scene, where you see Riri Williams (Dominique Thorne) forging her Ironheart suit and a heart-warming (mural) tribute to the late actor.

The second Black Panther movie also stars Danai Gurira as Okoye, Letitia Wright as Shuri, and Winston Duke as M'Baku. Daniel Kaluuya, who played W'Kabi in the 2018 film, will not be returning for Black Panther: Wakanda Forever due to scheduling conflicts with his Jordan Peele film, Nope, out August 19 in Indian cinemas.