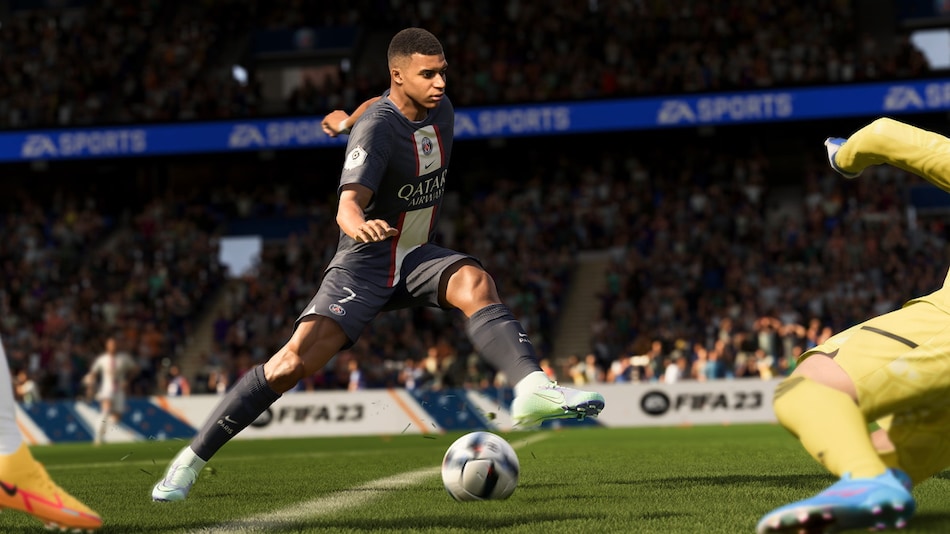 FIFA 23 — out this week on all major platforms — will be the last time to carry its iconic moniker, following a financial dispute with the footballing body. While certainly not emotional, it would take a while to get used to its new name, “EA Sports FC,” which goes into effect starting next year. The latest entry is touted to be a larger improvement over its predecessor, offering cross-play support at launch, while opening ways to women's leagues — a first for the franchise. At the end of the day, it's a sports game, so there's nothing much to change in terms of gameplay. Fans can keep complaining about it, but FIFA continues to be one of the best-selling games around the world.

As is evident from the number of people who grasped the slight chance of pre-ordering the game at a low cost of Rs. 5. Back in July, EA Sports scored an embarrassing own goal, when it accidentally listed FIFA 23 pre-purchase on the Epic Games Store at an incorrect price. Early birds managed to snag the deal and shared their elation across social media, urging users around the whole to switch regions to India and grab it at a dirt-cheap price. Given it's previously been named the “worst company in America,” no wonder Electronic Arts grabbed the opportunity to improve its image, honouring all purchases made during that timeframe, and moving on. Good job, EA!

Keeping with tradition, this year's FIFA adds to the responsiveness and fluid movement, during gameplay. Thanks to the new HyperMotion2 technology, which captures data from real-life 11v11 matches via machine learning, FIFA 23 boasts of a true-to-life footballing experience. This is, of course, adding to the new animations and over 500 crowd chants to liven up the on-pitch atmosphere. Oh, and let's not forget about Ted Lasso's inclusion in the game. Played by Jason Sudeikis in the eponymous Apple TV+ series, the American-origin coach brings his pack of AFC Richmond players to FIFA 23, hoping for a promotion into the big leagues.

Ted Lasso is coming to FIFA 23, and will be available as a usable manager in Career Mode
Photo Credit: EA Sports

With that, here's everything you need to know about FIFA 23, available later this week:

Pre-ordering the Ultimate Edition or subscribing to EA Play Pro grants you three-day early access starting September 27. Not to be confused with the base plan, the Pro subscription available only on PC costs Rs. 999 per month, exclusively on the EA Play app (previously Origin). Besides the bonus FIFA early access, members get unlimited access to new releases without having to pay full price.

That said, subscribing to the standard EA Play also has its benefits. While members get early access by three days, the playtime is shortened by 10 hours — after which, you will be required to purchase the game. You do get a 10 percent discount. This applies to both PC and console players, though if you're subscribed to Xbox Game Pass, EA Play comes included in the package. The base EA Play subscription costs Rs. 315 monthly and 1,990 per year, across all platforms.

Console players have it a bit rough. On both PlayStation and Xbox system, FIFA 23 global launch is set for September 30 at 12am IST. Early access begins on September 27, at 12am IST.

The higher-tier Ultimate Edition grants up to three-day early access, as stated before, in addition to other in-game rewards. Players will receive 4,600 FIFA Points to spend on their Ultimate Team, an FUT Ones to Watch Player Item (untradable), a Team of the Week 1 Player, and cover star Kylian Mbappé as a Loan Item for 5 matches.

Pre-orders are now live across all platforms, with the standard edition on Steam and Epic Games Store costing Rs. 3,499. The Ultimate Edition is listed at Rs. 4,799 and features the aforementioned bonuses.

EA Sports and its India distributor E-xpress reportedly hiked prices for the physical console versions of FIFA 23. On both PS5 and Xbox Series S/X, FIFA 23 Standard Edition cost went up from Rs. 4,499 to Rs. 4,799.

Pricing for the Ultimate Edition, however, remain unaffected — Rs. 6,499, as per PlayStation Store and Xbox Store. Digital editions still maintain their original price. So, if you aren't a stickler for physical media, this it's the cheaper option.

Note that the Ultimate Edition on consoles is currently only up for sale digitally.

EA Sports has launched its web and companion apps for FIFA 23, granting players a headstart on their Ultimate Team. The app is now available to download for free on both Android and iOS devices, and requires your EA account for login. Once signed in, players can access FUT 23 ahead of time, and curate every aspect of their team via the transfer market. From walkout music, goal celebrations, and TIFOs, every aspect of your home ground can be customised prior to the actual launch on September 30.

Having the app lets you claim limited-time rewards without having to sign into your PC or console, and not miss a beat of action. However, EA Sports noted criteria for those looking to get an early peak into FIFA 23's Ultimate Team. Those who created a FIFA 22 FUT club prior to August 1 get access to FUT 23 early, through the app. However, if you happened to delete your previous club, you get stuck in the same boat as new players — forced to wait until the game launches, and build a squad from scratch.

Check Out the Official Soundtrack for FIFA 23, Out Now on Spotify

Despite scoring 24 goals for Manchester United in the 2021–22 season, Cristiano Ronaldo has tumbled down to a 90-rated card. Furthermore, his pace has been reduced to 81 — a big drop from the 87 figure in FIFA 22.

Hat-tricks, clean sheets, and derby dubs. ⚽🔥#TOTW is back with a vengeance 👊

Using the robust database, players can compare footballer stats ahead of time, and keep an eye out for potential transfers that would help boost their team to victory. In fact, the publisher also unveiled TOTW (Team of the Week) cards that'll be available in-game, right from the early access period. Notable players include a 92-rated De Bruyne, a 90-rated Son Heung-min from Tottenham Hotspur, S.S. Lazio's 87-rated Ciro Immobile, an 86-rated Federico Valverde from Real Madrid, and a lot more.

The studio also unveiled some FIFA 23 ICONs cards, which have three variants. Up first is the Brazilian right-wing legend Jairzinho, whose prime card is rated at 92. Then there's the German striker Gerd Müller, lauded for his clinical finishes, the icon's highest rated card says 94. And finally, we have the Spanish commanding midfielder Xabi Alonso, rated at 90.

Leading up to its launch, EA Sports dropped several trailers, detailing the gameplay and new features coming to FIFA 23.

The biggest change gracing FIFA 23 this year is support for cross-play, enabling seamless online multiplayer across platforms. This is highly beneficial for PC players in India, who usually get stuck playing online matches against the same opponent, regardless of the division. The server population is bound to go down in a few weeks, and this new update will let them play against those on the PlayStation or Xbox systems — thereby widening the player base.

Cross-play also extends to Ultimate Team, where players will be asked to toggle the option at the start of a session. If the selection is disabled, players will be matched up against those on the same system, resulting in quick matchmaking. However, if you intend to play against other platforms, lobby creation will take a bit longer.

All that said, the feature is currently only available for 1v1 modes. That's sure to be a downer for co-op players.

FIFA 23 also brings two major Women's Leagues to the mix — the FA Women's Super League and the French Division 1 Féminine — which Electronic Arts promises to expand upon in the future. The developers got two women's teams to play 11-a-side matches and complete drills, in order to capture realistic data using the aforementioned HyperMotion2 technology. The Chelsea Women's striker, Sam Kerr, is the first female athlete to be featured on the cover of the annual footballing franchise.

FIFA players will have a shot at lifting the World Cup in virtual form this year. As the 2022 Qatar World Cup — starting November 20 — rolls in, FIFA 23 will introduce a free update, that enables themed menus, eye-catching kits, and celebrations that mimic the real-life championship. EA Sports is tight-lipped about the details, but recent reports indicate an Ultimate Team integration and an unexpected collaboration with Marvel, which brings footballing legends back to the pitch.

Not to mention, once the 2023 Women's World Cup Australia and New Zealand kicks off next year, FIFA 23 will get a respective update. As seen in past instalments, the game mode should be available to play long after the tournament has ended. Further details should be revealed in time.

EA Sports has added a brand new FUT Moments mode, which is designed to be a quick, bite-sized scenario method to earn rewards. Players can partake in certain challenges within a match, like a crucial free kick, penalty or a decent attempt. Following the given instructions and completing these sessions grants players Stars, which can be redeemed to unlock packs and other rewards from the FUT store. FIFA 23 will also include some crazy challenges such as scoring with a goalkeeper or performing a skill move, which grants bonus Stars for a job well done.

Some moments will be inspired by real-life matches, while others would be manifested by the developers. This would primarily serve as an offline component to FIFA Ultimate Team, featuring some occasional seasonal updates. This is also ideal for players who don't have the time to sit through an entire match. So, they can just boot up the Moments mode and farm stars to unlock key players for the online FUT segment.

The PC system requirements come directly from EA, with the common requirements being listed as Windows 10 64-bit, at least 100GB of free storage space, and a 512kbps or faster Internet connection for online play.

At the time of publishing, no reviews were available — and there's no word on when to expect them either. The first reviews for FIFA 23 should drop ahead of release.