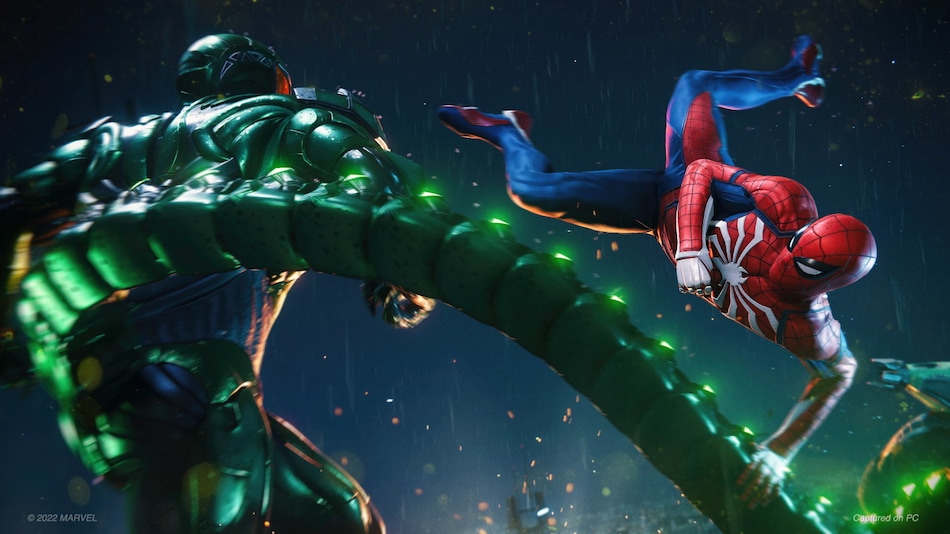 Spider-Man Remastered on PC marks the fourth PlayStation 4 exclusive to step onto a new platform. Sony's critically-acclaimed blockbuster takes the titular spandex-wearing Marvel superhero and weaves an original saga tailored to the new generation. Starting this Friday — early Saturday for those of us in India — PC gamers step into the shoes of Peter Parker, eight years into his crime-fighting career, and undertake numerous missions to avert danger threatening to ruin the city of New York. The new Marvel's Spider-Man version comes with various quality-of-life improvements and support for ray-tracing on PC.

Drawing inspiration from games such as Sunset Overdrive and the Batman: Arkham franchise, Spider-Man Remastered allows for smooth mobility, as you chain attacks together for bonus damage. You can try out new high-tech Spidey gadgets and listen to J. Jonah Jameson's rants, all while thrashing several criminal masterminds and gangs located in the sprawling city. The original title became one of the fastest-selling games on PlayStation 4 — rightfully so — and even went on to receive a full remaster for the next-gen PlayStation 5 console in late 2020.

It's this “grand” PS5 version that PC players will get treated to, which includes the Black Cat DLC and some extra achievements. It is also worth mentioning that the remastered version will feature a younger-looking Peter Parker, played by Yuri Lowenthal, instead of the original actor John Bubniak. At the time, fans were upset over this change, with many claiming the new character model looked “soy” and awfully similar to Tom Holland. Developer Insomniac Games, however, stuck by their decision in light of upcoming games in the franchise — Spider-Man: Miles Morales and the newly announced Spider-Man 2.

With that, here is everything you need to know about Spider-Man Remastered, available later this week on PC.

Marvel's Spider-Man Remastered launches on PC this Friday, August 12 for most regions, and August 13 for a handful others.In India, the game unlocks on August 12, late, at 8:30pm IST.

The Spider-Man PC game is currently up for pre-order across Steam and Epic Games Store, and with that comes bonus in-game items.

Insomniac Games has also confirmed that Spider-Man Remastered had been verified for Steam Deck, allowing portable, easy access to those who own the handheld console, starting day one. The Steam Deck is currently not sold in India.

The PC system requirements come directly from PlayStation, with the common requirements being listed as Windows 10 64-bit, DirectX 12, and at least 70GB of free storage space on an SSD.

On both Steam and Epic Games Store, Marvel's Spider-Man Remastered is listed for Rs. 3,999, which is more expensive when compared to other PS4 ports. All three PlayStation PC titles — Horizon Zero Dawn, Days Gone, and God of War (2018) — are priced at Rs. 3,299.

Sony has not made a statement on this price bump, but is actively reducing costs in several regions including Australia, Israel, New Zealand, Norway, Poland, Switzerland, and the United Kingdom. In England, the game was listed at £54.99 (about Rs. 5,288) and has now been cut down to £49.99 (about Rs. 4,806). Other regions will remain unaffected by this price change. Players who pre-ordered Spider-Man Remastered from said regions can now apply for a refund and re-purchase under the deducted cost.

Insomniac Games has only made one Spider-Man Remastered edition available for purchase, albeit with pre-order bonuses. Players will be granted early unlocks for three Spider-Man suits: Iron Spider Suit, Spider-Punk Suit, and the original Velocity Suit. Furthermore, you get a head start in-game, thanks to the five extra skill points and early access to the Spider-Drone gadget. The PC version also comes packaged with ‘The City that Never Sleeps' story chapters featuring Black Cat, both on Steam and Epic Games Store.

While the official spec sheet for the game recommends a 70GB storage space, Spider-Man Remastered on PC requires 65.25GB when installed, Gadgets 360 can confirm. The additional 4GB comes in handy when downloading updates that extract themselves before being lobbed in with other files.

In the Spider-Man Remastered trailer, Insomniac Games showcased a bunch of new features coming to the PC version, starting with ray-tracing all across the board, with high-quality reflections and shadows. Support for Nvidia DLSS and DLAA are included as well, offering better graphics performance and increased framerates, provided you own a GeForce RTX graphics card.

A PC port also warrants full keyboard and mouse support, which has been included with Spider-Man Remastered, offering customisable buttons that even extend to the mouse macros. Another cool addition would be support for PS5's DualSense controllers. PC players will get to experience adaptive trigger feedback and haptic response, as they fight iconic Marvel villains through the streets of New York.

Not to mention, it features a myriad of display ratios and resolutions, including the ultrawide 21:9 and panoramic 32:9 to suit your desires. Marvel's Spider-Man Remastered will also support achievements and cloud saves on both Steam and the Epic Games Store.

At the time of publishing, no reviews were available — and there's no word on when to expect them either. Going by earlier PC ports of PS4 titles, the first reviews of Spider-Man Remastered PC should drop ahead of release.