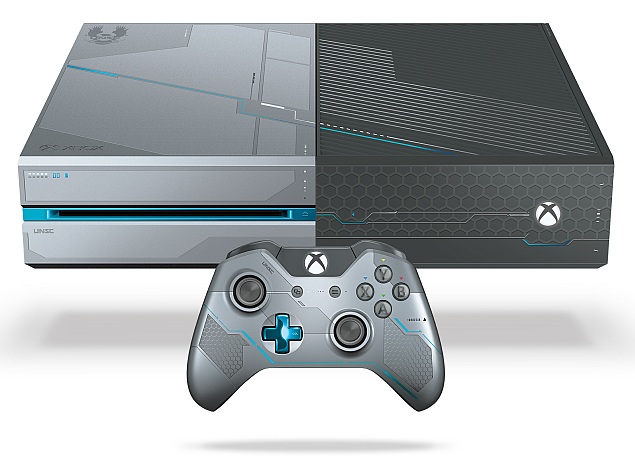 Microsoft has announced a bunch of details on new titles and bundles at the Gamescom 2015. It, at the event, also announced a new version of its Xbox One hardware, based on one of the popular upcoming titles - Halo 5: Guardians.

Inside the bundle, Microsoft has custom designed the console inspired by Spartan Locke and UNSC technology. The Xbox One Halo 5 version features two-tone panelling, blue metallic accents, and graphics on the vents. Also included are in-game sounds, in which gamers can also hear the Plasma Grenade charging up when turning the console on, smart-link activation when hitting the eject button and more.

As for the digital content, besides the full game download, gamers would receive a Warzone REQ Bundle, featuring 14 premium Requisition Packs, FOTUS-class armor, and exclusive multiplayer emblem. An alloy Guardian model designed by Metal Earth, the Halo: The Fall of Reach animated series, has also been given as a part of the bundle.

The limited edition Halo-themed wireless controllers, like mentioned for the console, also sports a laser-etched design. While the first controllers has metallic-blue accents inspired by Spartan Locke and UNSC military insignias, the second controller dubbed Xbox One Limited Edition Halo 5: Guardians - The Master Chief Wireless Controller, comes with a green and metallic orange accents borrowed from the Master Chief's armour. It also comes with a bonus REQ Pack including the Dauntless visor. Both feature 3.5mm headphone jack. They will be available in starting of October priced at $69.99.

ASTRO A40+MixAmp M80 Halo 5: Guardians Edition headset, as detailed by Microsoft, falls in the same design profile like rest of the devices inside the bundle. The mono-headset features a custom dark chrome matte finish with metallic blue accents. Also included is an in-game REQ Pack. The headset are already up for pre-orders from retailers or ASTRO Gaming website, priced at $220 and will reach market in September this year.
Comments