Steam users can simply point their phone camera at the sign-in screen and gain instant access. 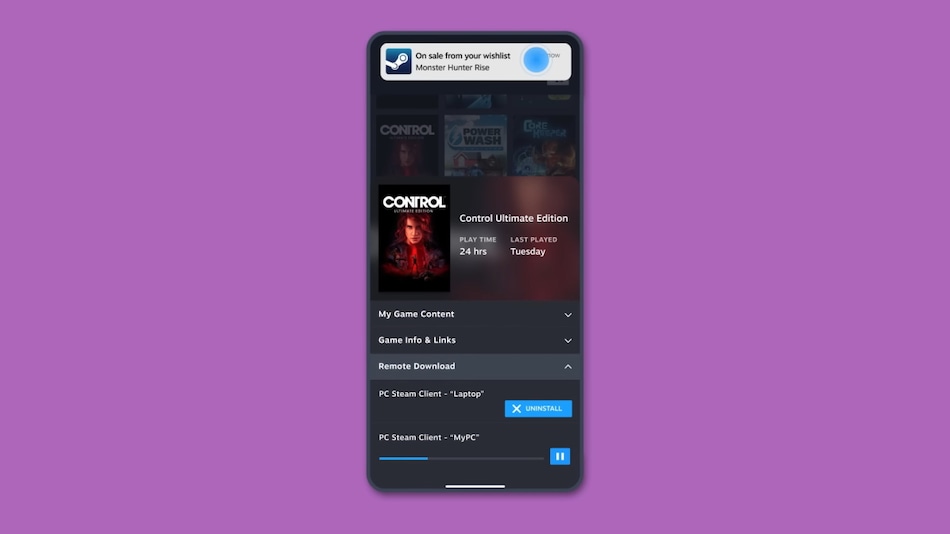 You can download games remotely via the Steam mobile app

Steam's revamped mobile app is now available to download on Android and iOS. Following a few months of public beta testing, Valve has finally dropped an official update, bringing a new user interface, and a slew of features, ranging from QR-code sign-in, customisable tabs, and smarter notifications. You can also make use of the ‘Approve'/ ‘Deny' prompt on the app, instead of entering a Steam Guard code — like OTP — for signing in to a different system. The Steam mobile app beta first rolled out in August, adding a bottom navigation screen panel that makes switching between pages a breeze.

In a blog post, Valve detailed all the features — both old and new — included with the revamped Steam mobile app. Up first, we have the QR-code sign-in — akin to Discord — eliminating the need to enter a username, password, or a Steam Guard code, when signing in to your account. Users can simply point their phone camera at the on-screen code, and instantly be granted access. Alternatively, when logging into a device the old-fashioned way, users will receive a prompt, with options to approve or deny the attempt.

The biggest change to the Steam mobile app has to be the interface, which now features a bottom-aligned navigation pane. Here, you can cycle between the storefront, news panel, security, notifications, and account settings. The Steam games library looks far more impressive, thanks to a grid-like format that displays game posters as tiles. Of course, the remote download option returns, letting you install Steam games through your phone — as long as the main system is online.

While this isn't a new feature, Valve used this update as an opportunity to remind users of the app's capability. “Oh wait, you didn't know we had a mobile app?” says the narrator in the video. Most Steam mobile app users are competitive players, who rely on the Steam Guard authenticator, for signing in to unfamiliar systems at gaming cafes or tournaments. Much of the functionality remains the same, letting you add or remove friends, purchase new titles, and trade market confirmations. Annoying notifications can be filtered to your liking, and the Steam wallet balance is pasted right on the front page.

Out of beta, the Steam mobile app is available to download on Android and iOS devices.