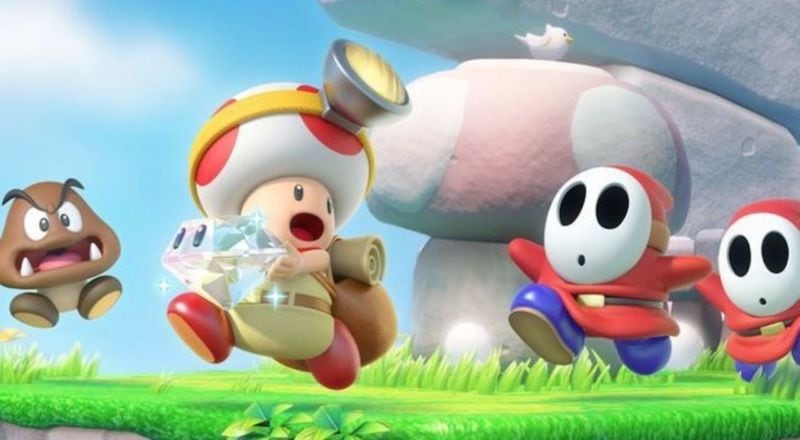 Though it does bring sharper, colourful visuals, Captain Toad: Treasure Tracker on the Nintendo Switch suffers in other departments. Through your adventure you’ll be waddling through a variety of mazes and will frequently need to rotate the camera to find a way forward or collect new items. It’s a digital Rubik’s Cube of sorts that demands precision controls. Particularly in later levels that have enemies and obstacles aplenty and Toad can’t jump to avoid them.

Playing it in handheld mode fares a bit better. You can use the analogue sticks to rotate the screen though you can only use the Switch’s touchscreen to interact with certain parts of the environment instead of letting you play the entire game with touch controls. It’s a perplexing omission that doesn’t make it feel intuitive at all.

This inconsistency kneecaps the game on the Nintendo Switch. It looks its best in docked mode on a big screen with its gorgeous locales and colourful characters but suffers from imprecise controls. In handheld mode, every detail is shrunken down so it doesn’t look as good in comparison, but it controls slightly better despite the lack of touchscreen options. All of this makes the Nintendo Switch version of Captain Toad: Treasure Tracker a compromise.

As for Captain Toad: Treasure Tracker on the Nintendo 3DS? It’s a pleasant surprise. The cartoon-like art style looks vibrant on its smaller screen while every area and secret is intact with no omissions. Plus the 3DS’ 3D effect gives a sense of depth to its puzzles and even in the game’s busiest segments, it doesn’t slow down at all. It’s obviously not going to rival the Switch in the graphics department but holds its own. Considering that the Nintendo 3DS released in 2011 and predates the Wii U and the Switch, it’s surprising the game runs at all and it’s downright miraculous that it looks as good as it does.

Though its strongest feature on the Nintendo 3DS is its controls, you can also use a stylus with the console’s touchscreen to move and manipulate the environment to your liking. It just makes the proceedings feel a lot more precise and accurate versus the use of an analogue stick or motion controls that don’t work as well for this kind of game. Be it evading enemies, dodging obstacles, or discovering hard to reach treasure, Captain Toad: Treasure Tracker feels right at home on the Nintendo 3DS.

That brings us to the Wii U version of Captain Toad: Treasure Tracker. Despite being originally created for the ailing console and cramming every possible feature - such as forcing you to blow into the Wii U tablet’s mic to remove blocks in your path as well as its gyroscope to aim at foes - the game feels like a poor cousin of the Switch edition. Suffice to say, it doesn’t hold up compared to either the Nintendo 3DS or Switch versions of the game.

All of this goes to show that not every game benefits from being played on more powerful systems or ones with the most control options. In both departments, the Nintendo Switch trounces the 3DS but it falls flat in delivering an experience that a title like Captain Toad: Treasure Tracker deserves. With Nintendo keeping tightlipped on a Nintendo 3DS follow up and the Switch’s rousing success, it’s unlikely that the company would release a dedicated handheld. But if it does, it would be interesting to see if it would feature some of the traits that’s made the 3DS last as long as it did such as its dual screen design and stylus controls which make experiences Captain Toad its own.