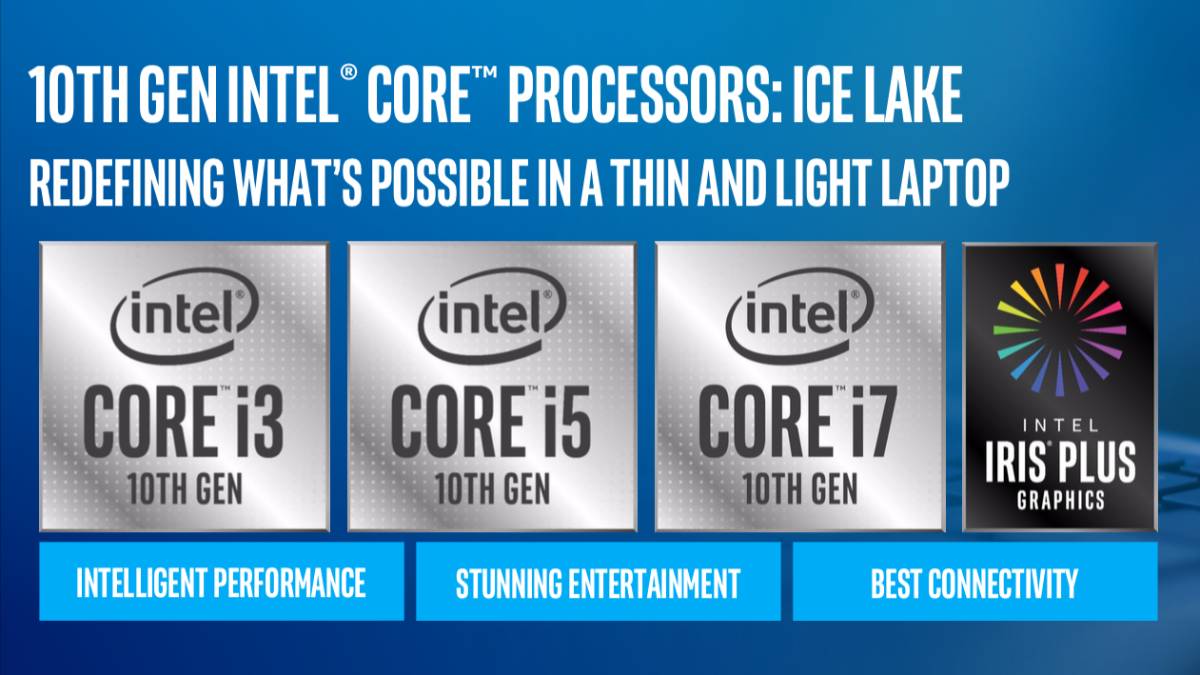 The new CPUs will be identified by new badges

Intel has officially announced the first of its 10th Gen Core CPUs, which will be based on the 10nm 'Ice Lake' architecture making these the first Intel 10nm processors to ship in volume after a delay of nearly four years. The first products in the 10th Gen Core family will be U-series and Y-series models designed for mainstream and thin-and-light laptops respectively. Intel has announced 11 new processor models across its Core i3, Core i5, and Core i7 tiers. Laptops based on these new processors are expected to ship in time for the 2019 US holiday shopping season, which means wide availability in the late third or fourth quarter of this year.

The new 'Ice Lake' family promises not only improved CPU performance but also significantly better integrated graphics thanks to the new Gen11 GPU architecture and also new AI acceleration capabilities, which Intel is branding Deep Learning Boost. These new CPUs will also feature integrated Wi-Fi 6 and Thunderbolt 3 controllers as well as low-power sensor capabilities for use cases such as voice recognition.

Intel says that its Gen11 integrated GPU will deliver the biggest performance leap since the Skylake architecture was introduced in 2015. The GPU is capable of up to 1 Teraflop of processing bandwidth, and up to 64 execution units are used on the highest-end models. The Iris Plus name will be used to brand the most powerful implementations of this GPU. Intel is promising 4K 60fps HDR video playback as well as improved gaming and pro content creation performance.

The CPU itself uses Intel's Sunny Cove core design. The highlight of this is Intel's new Deep Learning Boost instruction set which promises to accelerate inferencing and multiple kinds of AI workloads by up to 2.5 percent. Laptops with these CPUs will also be able to have up to four Thunderbolt 3 ports, and will support LPDDR4 RAM for the first time.

For its 10th generation, Intel is introducing a new model naming scheme which includes a 'Gx' marker at the end denoting the level of integrated graphics capabilities that each chip will have. There will also be new badges for each of the product tiers as well as a badge for Intel Iris Plus graphics.

The new CPUs in the Y-series include a single 28W model, the Core i7-1068G7, which will have four cores and eight threads, as well as 64 graphics execution units. Its base and single-core boost speeds are 2.3GHz and 4.1GHz respectively. There are five other 15W parts (which can be configured by OEMs to run within 25W) including one more quad-core Core i7, three quad-core Core i5s, and one dual-core Core i3 model. Not all feature integrated Iris Plus graphics, with the Core i3 and Lowest Core i5 featuring only 32 graphics EUs each. Base speeds start at 1GHz on the Core i5-1035G1, and single-core boost speeds go up to 3.9GHz on the Core i7-1065G7.

As for the U-series, there are one Core i7, two Core i5, and two Core i3 models. All of them have 9W default TDPs and can be configured up to 12W. The Core i3 models are dual-core while the rest are quad-core, and all feature Hyper-Threading. The lowest Core i3-1000G1 model is the only one to not feature Iris Plus graphics, while the rest offer either 48 or 64 execution units. Speeds range from 0.7GHz base on the Core i5-1030G4 to 3.8GHz on the Core i7-1060G7.

Over 35 laptops featuring the new 10th Gen Core CPUs will be available later this year, with the upcoming IFA trade show in September a likely venue for companies to show off their latest designs, as they have in previous years. Among the first wave of laptops will be the first to be built to Intel's Project Athena specification, which promises increased responsiveness and battery life in thin-and-light form factors.

At Computex in May this year, Intel showed off several laptop designs based on the then-upcoming 10th Gen CPUs. The company also recently confirmed that these CPUs have passed OEM validation and are now shipping to them in volume, to prepare products for launch. These new models replace the 8th Gen Whiskey Lake Y-series and Amber Lake U-series, skipping the 9th Gen for these segments.

Intel has said that the new Y-series and U-series are the first of a wave of 10th Gen product refreshes that will happen over the next year, though not all will use 10nm chips. The company will continue to use its refined 14nm process for appropriate product segments, most likely desktop CPUs, for the forseeable future. The company has also teased "additional mobile PC products for multi-threaded high productivity and commercial segments" in late August, implying H-series CPUs with higher core counts although 9th Gen H-series CPUs were introduced only a few months ago.