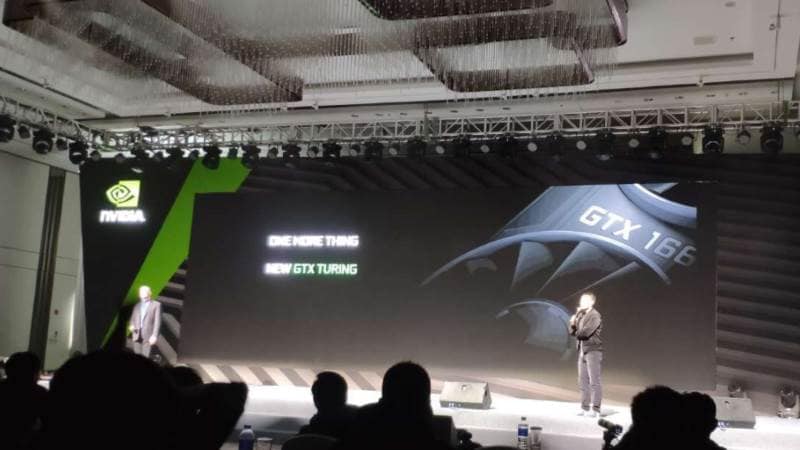 Multiple leaks online appear to point towards Nvidia launching a new mid-range GPU based on the current Turing architecture but with ray tracing features removed in order to cater to price-sensitive buyers. Rumours of such a product line, potentially using the GeForce GTX brand rather than GeForce RTX, have been making the rounds for months, but now concrete evidence has started to appear, including alleged benchmark scores and now a photo from an Nvidia industry event in China where the company's graphics card manufacturing partners are said to have been briefed about the new model. Unverified photos showing a graphics card with Nvidia's current RTX series dual-fan Founders Edition design, but with the text “GTX 166” visible, have spread across Twitter and Reddit.

The image, which has also been posted on a Taiwanese gaming forum, would appear to strengthen reports of the name GeForce GTX 1660 Ti, even though that doesn't fit in with any series that Nvidia presently offers, and contradicts the previously rumoured GTX 11-series branding that might be used for such a product. The GeForce GTX 1660 Ti name first showed up online the week after Nvidia CEO Jen-Hsun Huang unveiled the GeForce RTX 2060 on stage at his CES 2019 press conference.

The GeForce GTX 1660 Ti is said to be based on the same Turing architecture as the new GeForce RTX series, and could have 1,536 CUDA cores. It is unknown whether ray tracing functionality will simply be disabled, or whether this is a physically different GPU designed without the necessary RT and tensor cores. While the more expensive of the two rumoured GPUs would be paired with GDDR6 memory, the non-Ti GeForce GTX 1660 is rumoured to feature 1280 CUDA cores and either 6GB or 3GB of GDDR5X or GDDR5 memory.

The photo that has now emerged from Nvidia's purported event in China shows what appears to be a desktop Founders Edition graphics card with “GTX 166” visible before the rest is cut off by the way the image is cropped. Text on the same slide on stage appears to say “One more thing” and “New GTX Turing”.

If true, and if these GPUs do actually launch, they might help Nvidia attract customers who aren't ready to spend a lot of money for the RTX series' promised ray tracing and machine learning capabilities, which are at present being used for only a small handful of current and upcoming games such as Battlefield V and Shadow of the Tomb Raider.

It is also completely unknown how or why Nvidia chose to name the product GeForce GTX 1660 Ti, which is unconnected to both the GTX 10-series and the RTX 20-series. It is unlikely that Nvidia will release higher end versions of the non-RTX Turing GPUs to avoid cannibalising sales of the RTX 2080 Ti, RTX 2080, and RTX 2070, but lower-end variants could appear later to replace the ageing GeForce GTX 1050 and GeForce GTX 1050 Ti.