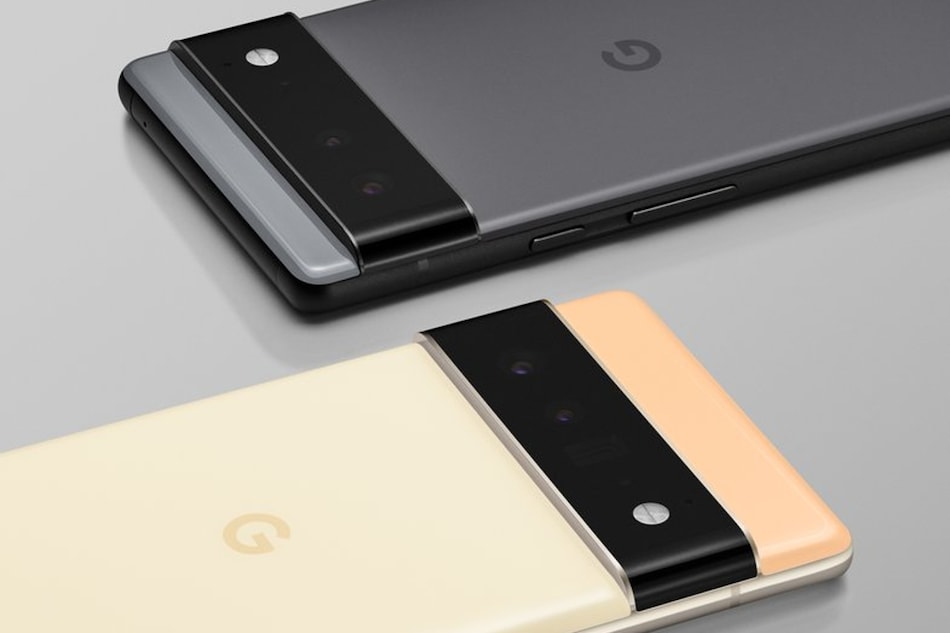 Pixel 6 and Pixel 6 Pro were unveiled at Google's Pixel Fall Launch event on Tuesday, October 19. Both new Google Pixel phones come with the company's proprietary system-on-chip (SoC) called Tensor that is designed to offer better artificial intelligence (AI) and machine learning (ML) performance results over previous-generation Pixel phones. The Pixel 6 and Pixel 6 Pro also come with a new design where you get a camera bar at the back — instead of a square or rectangular module. Both the new models also come with a hole-punch display design and run on Android 12 out-of-the-box. Furthermore, the new Pixel phones are IP68-certified to offer dust and water resistance.

Both Google Pixel 6 and Pixel 6 Pro will be available for purchase in the US starting October 28, with pre-orders starting today. Details about their arrival in other markets are yet to be announced. The India price and availability of the Pixel 6 series are also a mystery at this moment.

The dual-SIM (Nano+eSIM) Google Pixel 6 runs on Android 12 and features a 6.4-inch full-HD+ (1,080x2,400 pixels) OLED display that has a 90Hz refresh rate and Corning Gorilla Glass Victus protection on top. The display also has a 20:9 aspect ratio and 441ppi of pixel density. The phone is powered by Google's Tensor SoC, along with 8GB of LPDDR5 RAM. It comes with a dual rear camera setup that houses a 50-megapixel primary sensor with an f/1.85 wide-angle lens and a 12-megapixel ultra-wide shooter. The rear camera setup is coupled with laser detect autofocus (LDAF) and optical image stabilisation (OIS). The Pixel 6 also carries an 8-megapixel selfie camera sensor at the front, with an f/2.0 lens.

Google has partnered with Snap to offer a feature called ‘Quick Tap to Snap' later this year where users will be able to capture Snaps for Snapchat even when the phone is not unlocked and is on ‘Camera Only' mode. There will also be dedicated augmented reality (AR) lenses from Snapchat to enhance shots with artefacts.

Alongside Snap-powered camera features, the Pixel 6 has a feature called Magic Eraser that helps remove unwanted people and other objects from a processed photo. There are also preloaded features including Motion Mode that brings preset Action Pan and Long Exposure options and Real Tone that is claimed to use software algorithms to offer accurate colours. The phone also includes Face Unblur and Manual white balancing, among other Google's exclusive camera-focussed features.

On the part of storing content, the Pixel 6 offers 128GB and 256GB of onboard storage. Connectivity options include 5G, 4G LTE, Wi-Fi 6E, Bluetooth v5.2, GPS/ A-GPS, NFC, and a USB Type-C port. There is an in-display fingerprint sensor. Other sensors on board include an accelerometer, ambient light, barometer, pyrometer, magnetometer, and a proximity sensor.

The Pixel 6 also comes preloaded with features including Live Translate for messages and pictures that will work without the Internet.

Google has provided a 4,614mAh battery on the Pixel 6 that is rated to support fast wired charging using a 30W Google charger and 21W wireless fast charging via Google Pixel Stand (2nd gen). There is also a Battery Share feature to let users charge other devices through the Pixel 6 wirelessly. This sounds similar to Wireless PowerShare on Samsung Galaxy flagships. Besides, the Pixel 6 measures 158.6x74.8x8.9mm and weighs 207 grams.

The dual-SIM (Nano+eSIM) Pixel 6 Pro also runs on Android 12 but comes with a 6.7-inch QHD+ (1,440x3,120 pixels) LTPO OLED display that supports a variable refresh rate ranging from 10Hz to 120Hz. The display also has a 19.5:9 aspect ratio, 512ppi of pixel density, and a Corning Gorilla Glass Victus protection. Under the hood, the Pixel 6 Pro is powered by the same Tensor SoC that is available on the regular Pixel 6. It is paired with 12GB of LPDDR5 RAM. The phone also comes with a triple rear camera setup that brings a 48-megapixel telephoto shooter in addition to the 50-megapixel wide-angle camera and a 12-megapixel ultra-wide shooter. The additional telephoto shooter on the Pixel 6 Pro is touted to offer 20x Super Res Zoom (4x optical zoom).

Pixel 6 Pro features a triple camera setup at the back
Photo Credit: Google

For selfies and video chats, the Pixel 6 Pro has a 11.1-megapixel selfie camera sensor in the front, with an f/2.2 lens.

Just like the Pixel 6, the Pixel 6 Pro comes with Magic Eraser, Motion Mode, Real Tone, Face Unblur, and other custom camera features out-of-the-box. It will also get Quick Tap to Snap and other Snapchat features in the future.

The Pixel 6 Pro comes with 128GB, 256GB, and 512GB of UFS 3.1 internal storage options. Connectivity options include 5G, 4G LTE, Wi-Fi 6E, Bluetooth v5.2, GPS/ A-GPS, NFC, and a USB Type-C port. There is also an in-display fingerprint sensor. Other sensors on board include an accelerometer, ambient light, barometer, pyrometer, magnetometer, and a proximity sensor.

Google has integrated a 5,003mAh battery within the Pixel 6 Pro that supports fast wired charging using a 30W Google charger and 23W wireless fast charging via Google Pixel Stand (2nd gen). There is also the Battery Share feature for sharing the power with other devices over wireless charging standard. Lastly, the Pixel 6 Pro measures 163.9x75.9x8.9mm and 210 grams.

Android 12 Update for Google Pixel Phones Starts Rolling Out: How to Download
Facebook Plans to Rebrand With a New Name Next Week: Report