Pixel 7 vs Pixel 6 vs iPhone 14: Price in India, Specifications Compared

Google Pixel 7 is the first Google flagship to launch in India in four years. 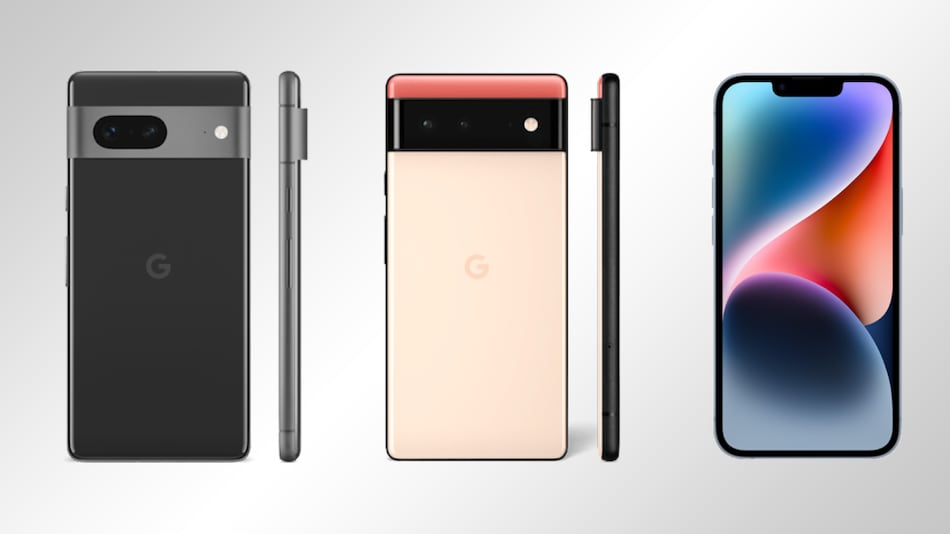 Pixel 7 was launched in India on Thursday as the company's latest Pixel-branded smartphone. The handset is powered by a second-generation Tensor G2 SoC, paired with 8GB of RAM and 128GB of storage. It is equipped with a 50-megapixel dual rear camera setup, along with a 10.8-megapixel selfie camera. The Pixel 7 sports a 6.3-inch OLED display with a 90Hz refresh rate. It runs on Android 13 out-of-the-box and is scheduled to receive 5 years of OS and security updates. It has an IP68 rating for dust and water resistance.

In this article, we have compared Pixel 7 price in India and specifications with its top competitor from Apple, the iPhone 14, and its predecessor, the Pixel 6.

Pixel 7 price in India starts at Rs. 59,999 for the sole 8GB RAM + 128GB storage model, which is sold in Lemongrass, Obsidian, and Snow colour options.

In comparison, the Pixel 6 was launched in October 2021 priced at $599 (roughly Rs. 45,000). The handset, which is available in Kinda Coral, Sorta Seafoam, and Stormy Black colour options, did not make its debut in India.

Meanwhile, the iPhone 14 was launched in India in September with pricing starting at Rs. 79,999. The handset is available in Blue, Midnight, Purple, Starlight, and (Product) Red colour options.

Pixel 7 vs Pixel 6 vs iPhone 14: Specifications

Pixel 7, Pixel 6, and iPhone 14 all come with dual-SIM connectivity, and the Pixel 7 and Pixel 6 run on Android 13, while the iPhone 14 runs on iOS 16, the latest version of Apple's mobile operating system.

The Pixel 7 and Pixel 6 are powered by the second-generation and first-generation Tensor processors, respectively, and paired with up to 8GB of RAM. Meanwhile, the iPhone 14 runs on last year's A15 Bionic chipset, which was found in last year's iPhone 13 models.

Apple unveiled eight new products at its September ‘Far Out' event. Which ones will float — and which will sink? We discuss this on Orbital, the Gadgets 360 podcast. Orbital is available on Spotify, Gaana, JioSaavn, Google Podcasts, Apple Podcasts, Amazon Music and wherever you get your podcasts.
Affiliate links may be automatically generated - see our ethics statement for details.
Google Pixel 7 vs iPhone 14 vs Google Pixel 6 comparison