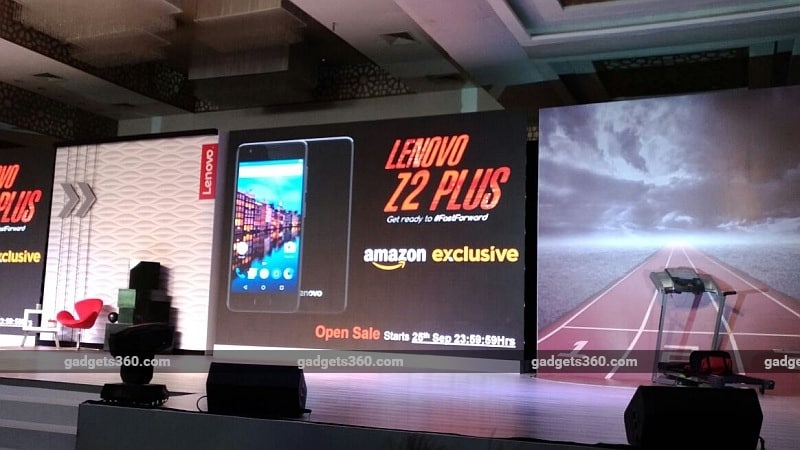 The Lenovo Z2 Plus will not run Cyanogen OS like its predecessor, the Lenovo Zuk Z1 (Review). Running Android 6.0.1 Marshmallow with the company's own skin atop, the Z2 Plus comes with the Google Now Launcher preloaded. The company is also touting gesture shortcuts on the Z2 Plus via the fingerprint scanner. It also sports a dedicated pedometer and industry-grade accelerometer.

The Lenovo smartphone also comes preloaded with the company's new U-Health app, and the hardware and software together make the smartphone a great activity tracker, Lenovo says. The U-Health app has been developed by the Zuk team. It can track data for steps, distance, running, and other physical activities. The Lenovo Z2 Plus sports a rollcage design, and a fibre glass frame.

The Z2 Plus is a dual-SIM (4G+3G) smartphone that supports Nano-SIM cards. It sports a 5-inch full-HD (1080x1920 pixels) display made by Sharp, with a pixel density of 441ppi. It is powered by a Qualcomm Snapdragon 820 SoC coupled with either 3GB or 4GB of LPDDR4 RAM. As we mentioned there are two built-in storage variants, 32GB and 64GB, and the storage cannot be expanded.

As far as the cameras are concerned, the Lenovo Z2 Plus packs a 13-megapixel rear camera with PDAF, LED flash, and electronic image stabilisation (EIS). It sports an 8-megapixel front-facing camera.

The Lenovo Z2 Plus runs Android and is powered by a 3500mAh battery that also features an intelligent charge cut-off feature to ensure the battery does not overcharge. Connectivity options on board include Wi-Fi, GPS, Bluetooth, and 4G. Sensors include a proximity sensor, ambient light sensor, accelerometer, and gyroscope.

The company is also touting the U Touch 2.0 fingerprint sensor on the home button, which is claimed to deliver 99.7 percent accuracy, get better with time with its self-learning module, and work with sweaty hands as well. Lenovo is also offering a Chrono Case (Rs. 1,299), Skullcandy Ando earphones (Rs. 1,299) additionally alongside, noting that the smartphone does not ship with earphones in the box. The company will be bundling a Stealth Case worth Rs. 699 alongside.