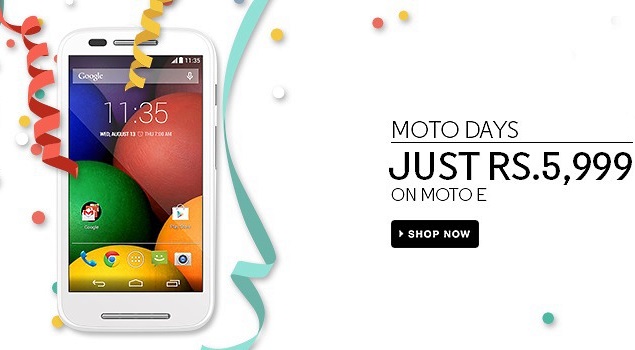 Motorola India has announced a bevy of offers on Moto devices in India on completing a year in the Indian market (since the launch of the first-generation Moto G) with its exclusive online partner, Flipkart. The new offers are valid on the purchase of the Moto E, Moto G (Gen 2), Moto X (Gen 2), Google Nexus 6 and Moto 360 via Flipkart from February 9 to 15.

To start off, the company has temporarily reduced the price of the popular budget Moto E smartphone in India, which is currently available at Rs. 5,999, down from the original price of Rs. 6,999 - a discount of Rs. 1,000.

The company has also brought back the 'exchange your old phone' offer under which customers can get up to Rs. 4,000 and up to Rs. 6,000 discounts on the purchase of the Moto G (Gen 2) and Moto X (Gen 2) smartphones respectively, in exchange for select phones. Notably, Motorola India had launched similar exchange offers for both the second-generation Moto G and Moto X smartphones last month.

#MotoDays are here and we have some exciting offers for you! Only on @Flipkart: http://t.co/sj7nm94ZjO pic.twitter.com/XzZwbZOVdF

Motorola India is also offering the Moto Deck Bluetooth speaker worth Rs. 8,990 for free with every purchase of the Moto X (Gen 2). The Google Nexus 10 is also currently available with an exchange offer of up to Rs. 10,000. Consumers who buy the Moto 360 along with the Nexus 6 will get an additional discount of Rs. 10,000 on the total cost.

The timing of the discounted pricing of the Moto E does not appear to be coincidental, with the successor to the popular budget smartphone expected soon - the original smartphone was launched back in May last year. A recent report speculated that the Motorola Moto E (Gen 2) might be announced at the sidelines of MWC in Barcelona next month. So far, there has been no announcement from the company.