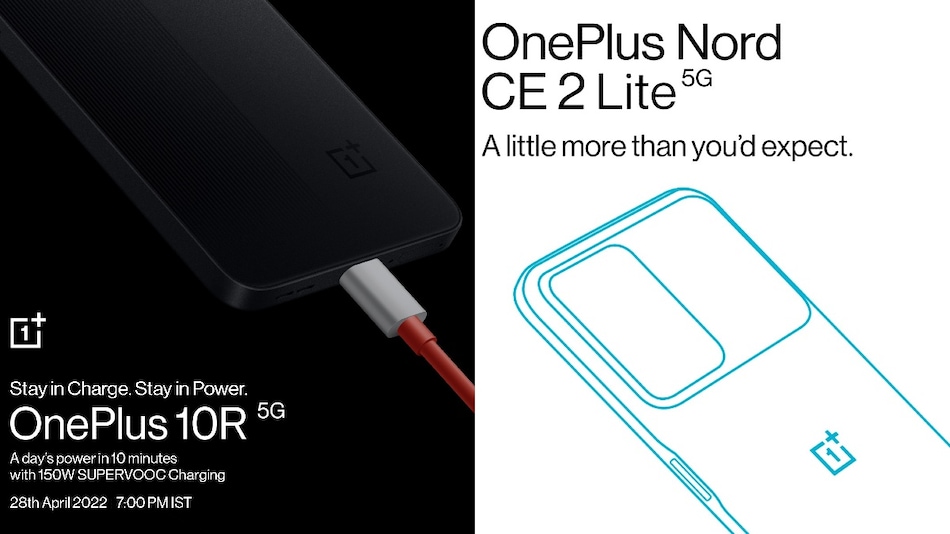 OnePlus 10R is said to come with three colour options

As per a communication from OnePlus, the OnePlus 10R 5G will come with 150W SUPERVOOC charging technology, which is claimed to fully charge the phone's battery in 17 minutes. The Chinese company also says that the base variant of the OnePlus 10R will come with support for 80W SUPERVOOC charging. Furthermore, OnePlus has said that the OnePlus Nord CE 2 Lite 5G will pack a 5,000mAh battery, and will feature a 33W SUPERVOOC rapid charging that can charge the battery from 0 to 50 percent in just 30 minutes.

Both the smartphones have been in the news lately. The OnePlus 10R was reportedly teased in an Amazon India advertisement tipping its design. A smartphone with an alleged OnePlus Ace moniker was also spotted on Weibo in China with a similar design as the OnePlus 10R suggesting that both phones are rebadged versions of each other.

The OnePlus 10R smartphone is tipped to sport a 6.7-inch full-HD+ E4 AMOLED hole-punch display with a 120Hz refresh rate. It could get an octa-core MediaTek Dimensity 8100 SoC. The phone is tipped to come with up to 12GB of LPDDR5 RAM and up to 256GB of UFS 3.1 storage. OnePlus may include a triple rear camera with a 50-megapixel Sony IMX766 primary sensor on the phone.

Meanwhile, OnePlus Nord CE 2 Lite 5G India launch has been set for April 28. The handset is reported to sport a 6.58-inch full-HD+ LCD display with 120Hz refresh rate. It could get a Qualcomm Snapdragon 695 SoC, which could be paired with 6GB/ 8GB of RAM and 128GB storage.

For photography, the phone is tipped to come with a triple rear camera setup headlined by a 64-megapixel primary sensor. It is said to be accompanied by a 2-megapixel mono and another 2-megapixel macro shooter. OnePlus Nord CE 2 Lite may get a 16-megapixel camera for selfies and video calls.