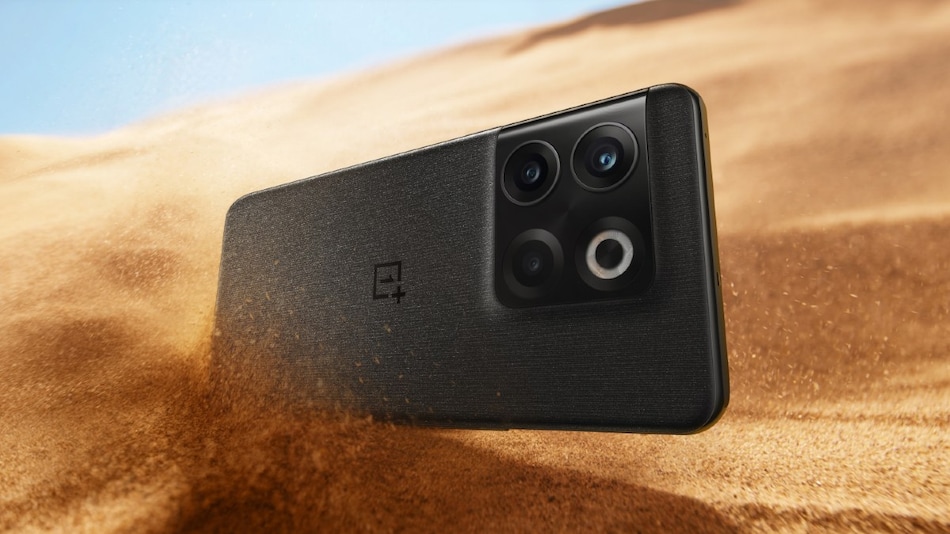 OnePlus 10T was launched globally, including in India, on Wednesday as the company's latest smartphone. It comes with the Snapdragon 8+ Gen 1 SoC, a 4,800mAh battery with 150W SUPERVOOC Endurance Edition wired charging, and a triple rear camera setup with 50-megapixel main camera. The smartphone is launched in three configuration options with the top-of-the-line variant offering 16GB of RAM. The phone also gets a new cooling system alongside a bunch of battery-related technology for an efficient and safe charging experience.

The OnePlus 10T price in India starts at Rs. 46,999 for the base 8GB RAM + 128GB storage variant. The phone also comes in a 12GB RAM + 256GB storage model that carries a price tag of Rs. 54,999. There is also a 16GB RAM + 256GB storage variant that has a price tag of Rs. 55,999. OnePlus has launched the smartphone in two distinct colour options — Jade Green and Moonstone Black. Preorders start today, while open sales start on August 6, according to the company.

The dual-SIM (Nano) OnePlus 10T runs on Android 12 with OxygenOS 12.1 on top. It sports a 6.7-inch full-HD+ (1,080x2,412 pixels) Fluid AMOLED display that is based on the low-temperature polycrystalline oxide (LTPO) technology. The display gets Corning Gorilla Glass 5 protection, offers up to 120Hz refresh rate, supports sRGB colour gamut, has 10-bit colour depth, and is HDR10+ certified. The smartphone is powered by the octa-core Snapdragon 8+ Gen 1 SoC, along with up to 16GB of LPDDR5 RAM.

The OnePlus 10T also comes with a next-generation 3D Cooling System with a cryovelocity vapour chamber – the largest in any OnePlus device – with 8 dissipation channels that are claimed to offer up to twice the dissipation ability as compared to traditional smartphone vapour chambers. The system uses 3D graphite to offer a claimed 50 percent improved heat dissipation compared to regular graphite. There is also the HyperBoost Gaming Engine on the OnePlus 10T in order to make gaming a smoother and stable experience.

In terms of optics, the OnePlus 10T features a triple rear camera setup with dual-LED flash. It houses a 50-megapixel Sony IMX769 primary sensor, with an f/1.8 lens and optical image stabilisation (OIS). The camera setup also includes an 8-megapixel ultra-wide shooter that has an f/2.2 lens with a field-of-view of 119.9 degrees and there is a 2-megapixel macro camera. For selfies and video chats, the OnePlus 10T carries a 16-megapixel camera sensor paired with f/2.4 lens at the front.

The OnePlus 10T comes with up to 256GB of UFS 3.1 dual-lane storage. Connectivity options include 5G, 4G LTE, Wi-Fi 6, Bluetooth v5.3, GPS/ A-GPS, NFC, and a USB Type-C port. Sensors on board include an accelerometer, ambient light, gyroscope, magnetometer, and a proximity sensor. There is also an in-display fingerprint sensor and Face Unlock feature for biometric security.

OnePlus has equipped the OnePlus 10T with dual stereo speakers that are backed by Dolby Atmos. The phone also has noise cancellation support. Besides, the OnePlus 10 Pro measures 163x75.37x8.75mm and weighs 203g.