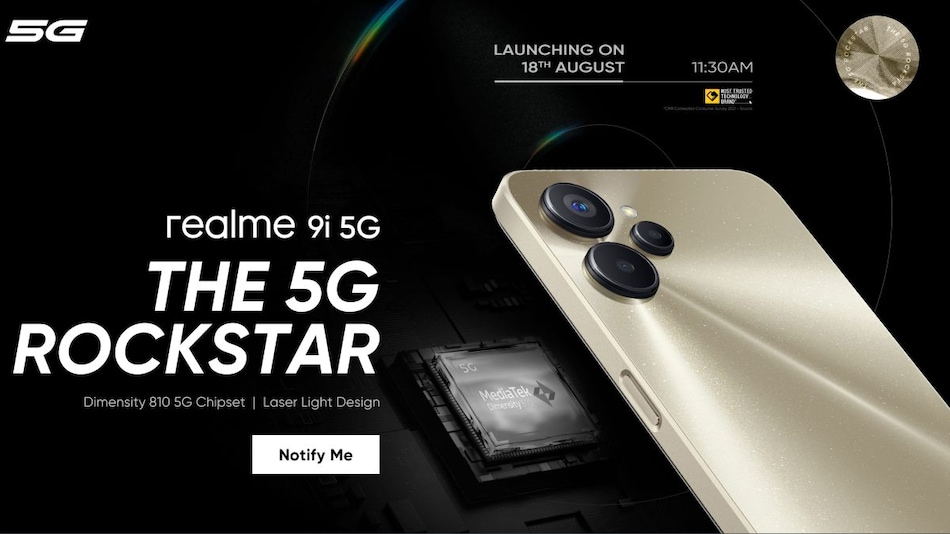 Realme 9i 5G will sport a ‘Laser Light Design’, according to the company

Realme 9i 5G is set to launch on August 18 at 11:30am IST. The microsite for the smartphone has gone live that reveals some specifications. Earlier, the company had already confirmed that the Realme 9i 5G could be powered by a MediaTek Dimensity 810 SoC. Now, the microsite confirms that the handset will pack a 5,000mAh battery. It also reveals that the display will feature 90Hz refresh rate and 180Hz touch sampling rate. As per a recent report, the expected colour options of the handset have also leaked.

Earlier, Realme confirmed that the upcoming smartphone will launch on August 18 at 11:30am IST, and it will be powered by the MediaTek Dimensity 810 SoC. The company claims that the Realme 9i 5G will sport a ‘Laser Light Design'. Realme is calling the smartphone ‘The 5G Rockstar'.

To recall, the Realme 9i features a 6.6-inch display with 90Hz refresh rate, full-HD+ resolution, and 20.1:9 aspect ratio. It is powered by an octa-core Qualcomm Snapdragon 680 SoC, coupled with Adreno 610 GPU and up to 6GB of LPDDR4X RAM. For optics, it sports a triple rear camera setup with a 50-megapixel primary sensor, a 2-megapixel portrait lens, and a 2-megapixel macro lens. At the front, it gets a 16-megapixel selfie camera. It packs a 5,000mAh battery with 33W Dart Charge support.