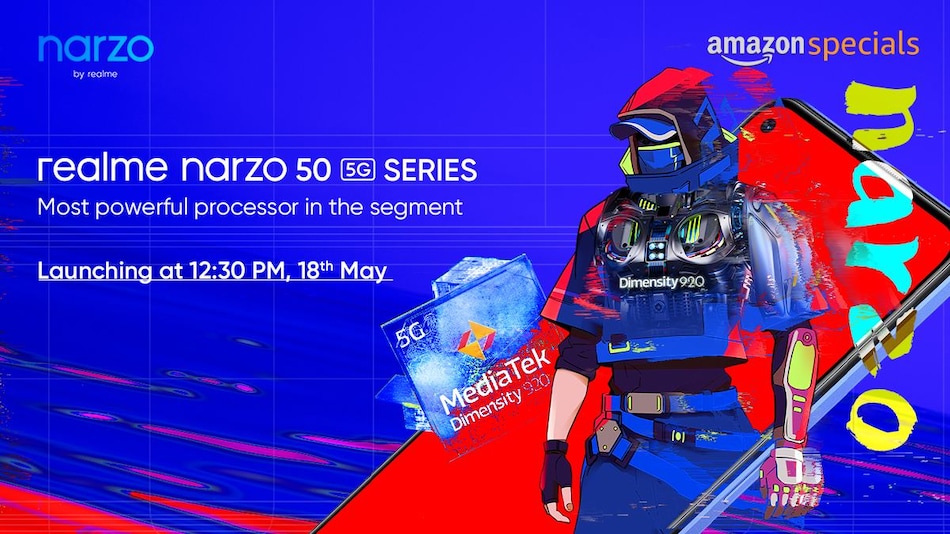 Realme Narzo 50 5G and Narzo 50 Pro 5G have been officially confirmed to be arriving in India on May 18. These youth-oriented handsets have been teased by the company to feature the most powerful processors in its segment, which is expected to be the mid-range smartphone market. There are speculations that the Narzo 50 5G could be powered by a Dimensity 810 5G SoC, whereas the Narzo 50 Pro 5G has been confirmed to feature a MediaTek Dimensity 920 SoC.

Realme India will hold a digital launch event on May 18 at 12:30pm IST, which will available to stream live on its official YouTube channel and Facebook page. The Realme Narzo 50 5G and Narzo 50 Pro 5G will be sold online on Amazon, apart from Realme India's official site. The company has also listed the Narzo 50 Pro 5G 6GB+128GB variant in Hyper Blue colour on Amazon in the build-up to the launch of the Narzo 50 Pro 5G. As we mentioned earlier, it confirms that this handset would be powered by a MediaTek Dimensity 920 SoC. The listing also mentions that the handset would feature a 5-layer Vapour Chamber Cooling System for enhanced heat dissipation. According to Vivo, this smartphone has received an AnTuTu benchmark score of 4,96,670 points. The page also teases that more information regarding the display would be revealed on May 16. This will be followed by details about its build, claimed to be the thinnest in the Narzo series, on May 17.

Recently, the listing for the Narzo 50 5G series had gone live on the official Realme India site, which can still be spotted on the Web Archive. This listing has since been pulled but not before already revealing the May 18 launch date. It also indicates that these smartphones will first go on sale in India on May 24.

Realme has not revealed the pricing for the Narzo 50 5G series as of yet. A recent report suggested that the Narzo 50 5G could priced above Rs. 14,000 and the Narzo 50 Pro 5G is expected to be priced at over Rs. 22,000 for its base variant. These handsets have also been tipped to arrive in Black and Blue colours.

Explainer: Crypto Fear and Greed Index and How Does It Guage Market Sentiment