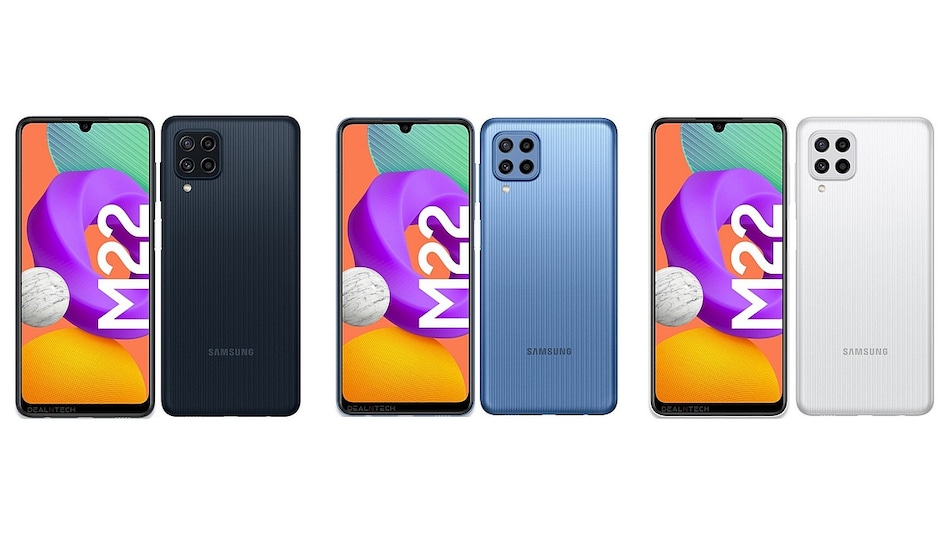 Samsung Galaxy M22 is expected to be offered in Black, Blue, and White colour options

The renders and the key specifications for Samsung Galaxy M22 were reported by DealNTech. The design is expected to be similar to Samsung Galaxy A22 with its quad rear camera setup mounted in a square housing at the top left corner of the smartphone with a circular LED flash below the square housing. At the front, Samsung may give the smartphone its signature Infinity-V waterdrop-style notch for the selfie camera. It is also expected to come in Black, Blue, and White colour options.

The upcoming smartphone from Samsung is expected to feature a 6.4-inch HD+ (720x1,600 pixels) Super AMOLED Infinity-V display with 90Hz refresh rate. The Galaxy M22 is expected to be powered by a MediaTek Helio G80 SoC that may be paired with 4GB of RAM and 128GB of onboard storage. It is also expected that the smartphone may feature microSD card support to expand the memory to 1TB.

Connectivity options on the Galaxy M22 could include GPS live tracking, LTE, NFC, Wi-Fi, Bluetooth v5, FM radio, Dual Nano SIM support, and a 3.5mm headphone jack. Sensors onboard may include gyroscope, proximity sensor, ambient light sensor, and accelerometer. It is expected to measure 159.3x74x8.4mm and may weigh 199 grams.