Tecno Spark 9T is going to be powered by the MediaTek Helio G35 SoC. 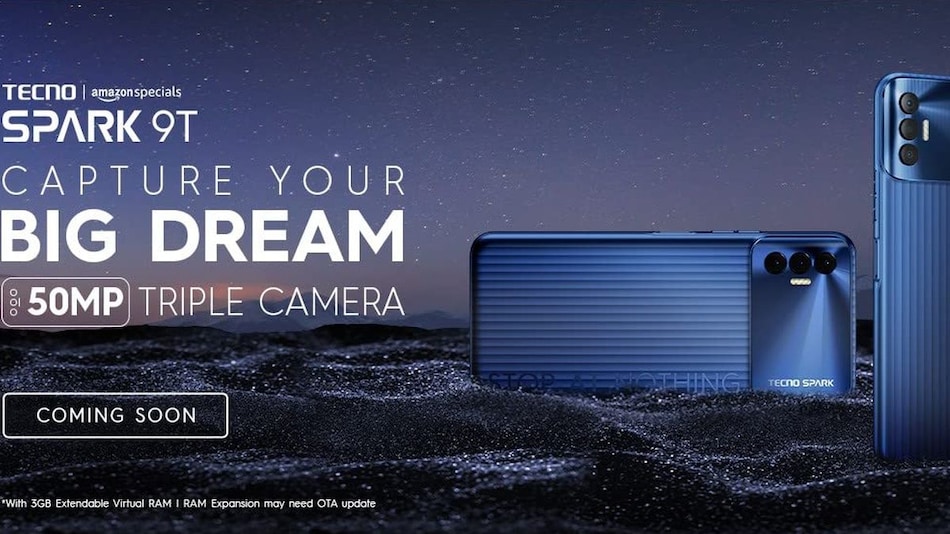 Tecno Spark 9T is confirmed to launch in India soon as the Amazon landing page of the smartphone has gone live. Although, the landing page does not reveal the exact launch timeline, it does mention some specifications of the handset. It is confirmed to feature a 6.6-inch display with full-HD+ resolution and a water-drop style notch. It will get a side fingerprint scanner for locking and unlocking the handset. Tecno Spark 9T was launched in June this year in Nigeria, in reportedly four colour options.

Tecno Spark 9T's Amazon landing page has confirmed that the handset will soon debut in India. Unfortunately, neither the company nor Amazon has officially announced the price or the India launch timeline.

Tecno Spark 9T is going to feature a 6.6-inch display with full-HD+ resolution and a water-drop style notch to house the selfie camera, as per the Amazon landing page. It will be powered by the MediaTek Helio G35 SoC, coupled 4GB of RAM and 3GB of expandable virtual RAM. For optics, it will feature a 50-megapixel triple rear camera setup, along with an LED flash.

The upcoming Tecno smartphone will pack a 5,000mAh battery with 18W fast charging support. The company claims that the smartphone can charge up to 50 percent with less than one hour of charging. The Tecno Spark 9T will also get a side fingerprint scanner to lock and unlock the handset.

The above mentioned specifications, which has been confirmed via the Tecno Spark 9T landing page, seem different from the Nigerian variant of the handset. The smartphone was launched earlier in Nigeria with a 13-megapixel dual rear camera setup and MediaTek Helio G85 SoC.