The two phones are tipped to launch in multiple variants and pack triple cameras. 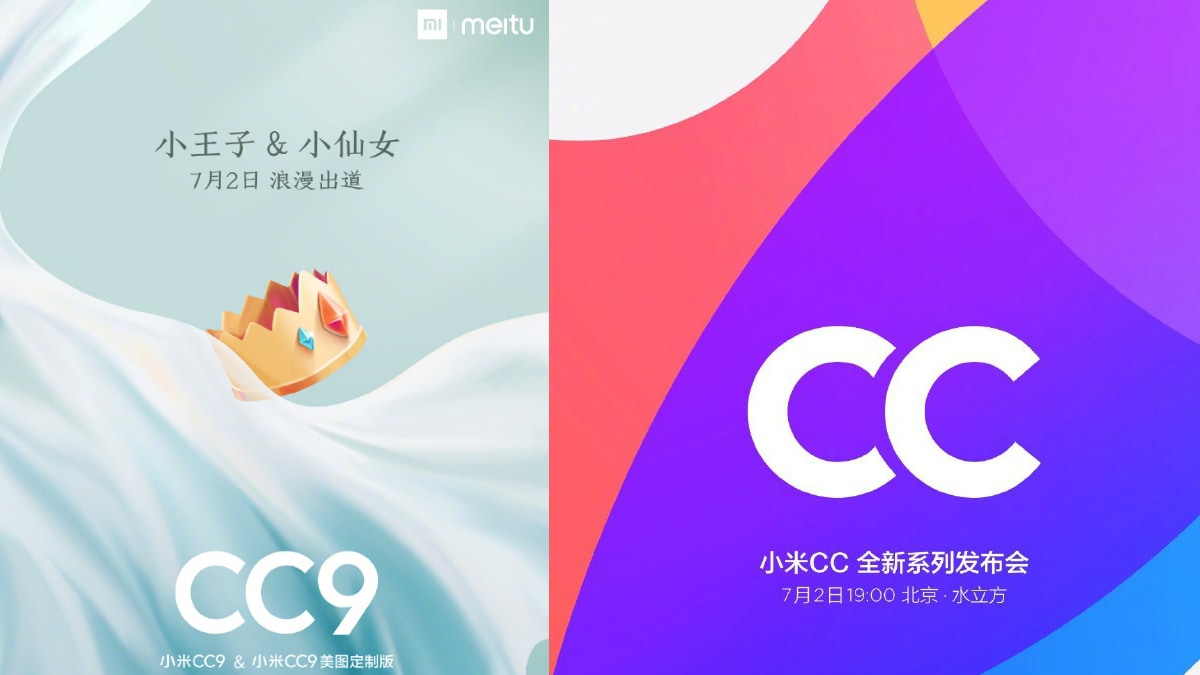 Xiaomi has confirmed that the Mi CC9 and Mi CC9e smartphones are launching in China on July 2. The phones are the first to debut in the company's new ‘CC' smartphone series meant for the youth-centric audience. CEO Lei Jun has also shared a poster confirming the launch date of the two phones. The two phones have suffered quite a few leaks recently, with the latest one revealing the CC9 and CC9e price and specifications. The two phones are rumoured to sport a triple rear camera setup and an in-screen fingerprint sensor as well.

Chinese electronics giant Xiaomi took to Weibo to announce the launch date of the new ‘CC' series phones. The Xiaomi Mi CC9 and Mi CC9e phones are now set to launch on July 2 in China. There is no word on the launch of these phones outside the Chinese market as of now. CEO Lei Jun shared multiple posters and even a promo video ahead of the launch of the new phones. The launch event will begin at 7pm local time on July 2.

The video does not give us a glimpse at the phones, but it hints at camera quality and good design to appease the youth audience. A recent leak suggested that the Mi CC9 phone will sport an all-screen display with no notch up front.

As for rumoured specifications, the Mi CC9 is expected to run on Android Pie-based MIUI 10 software, and feature a 6.39-inch full-HD+ (1080x2340 pixels) AMOLED display. It is tipped to be powered by the Snapdragon 730 SoC and pack a 4,000mAh battery as well with 27W fast charging support.

The Mi CC9 is expected to pack a triple rear camera setup with a 48-megapixel Sony IMX586 sensor, a 16-megapixel secondary lens, and a 12-megapixel third sensor. Up front, the phone is tipped to sport a 32-megapixel selfie sensor. The phone is listed to come with an in-screen fingerprint sensor, IR Blaster, USB Type-C port, and Hi-Res audio support as well.

The Mi CC9e is tipped to sport a smaller 5.97-inch full-HD+ (1080x2340 pixels) AMOLED display. It should be powered by the Snapdragon 710 SoC, and pack 3,500mAh battery with 18W fast charging support. The triple rear camera setup will consist of a 48-megapixel Sony IMX583 sensor, an 8-megapixel secondary sensor, an a 5-megapixel tertiary sensor. All the other specifications are listed to be similar to the Mi CC9.