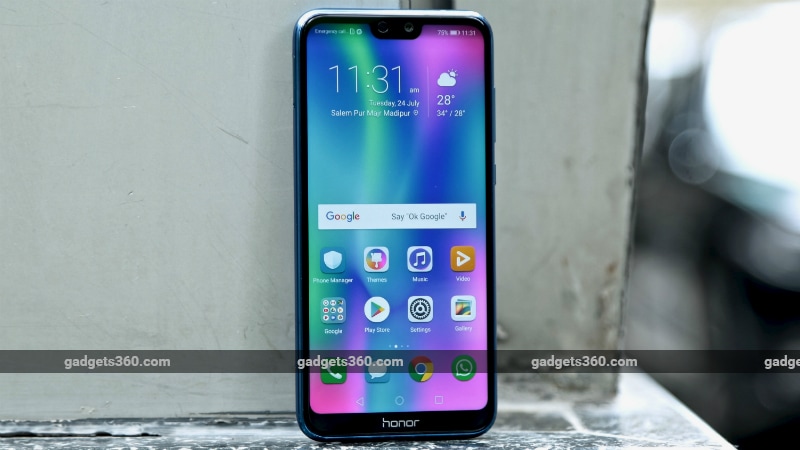 Honor has added yet another budget smartphone to its lineup. The Honor 9N improves upon last year's Honor 9 Lite (Review) in small yet significant ways. The display now sports a notch and the selfie camera has been bumped up to 16 megapixels. It features a glass back, dual rear cameras, a 19:9 display, and runs Android 8.0 Oreo out of the box.

The Honor 9N is priced starting at Rs. 11,999 and competes head-on with the likes of the Asus ZenFone Max Pro M1 (Review), Oppo Realme 1 (Review), and Moto G6 (Review). Does Honor's new smartphone have what it takes to compete in the cut-throat budget segment? Let's find out.

The most striking aspect of the Honor 9N is its design. The back panel is made of glass and has a glossy finish that looks striking. The horizontal dual camera setup barely protrudes from the chassis and the back panel looks very clean thanks to the lack of antenna lines and regulatory information.

The 5.84-inch display has a notch at the top, which is quite small. The notch is undoubtedly a polarising design element, and Honor has added an option in the settings menu to mask the same. This basically darkens the screen area on either side of the notch.

The Honor 9N will be available in four colour variants - Lavender Purple; Black; Robin Egg Blue, which is a greenish-blue shade that looks fantastic; and the one our review unit came in, Sapphire Blue. Only the Blue and Black versions will be available initially, with the other two coming at a later date.

The smartphone is compact and petite and very easy to use with one hand. The rounded corners and curved sides also enhance in-hand feel. That said, it is incredibly slippery and the glossy glass back is a fingerprint magnet. Build quality though is top-notch. The phone feels solid in the hand and it survived multiple drops during our review period.

The rear mounted fingerprint sensor is quick and accurate and can be used for a variety of functions such as taking a picture, answering calls, and sliding down the notification panel. These gestures can be used with any finger and are not locked to the finger you've registered for authentication.

The left of the Honor 9N is blank save for the SIM tray which makes you choose between a second Nano-SIM and a microSD card. The right side has the volume rocker and power button which are a tad too small for our liking but well within reach.

On the bottom of the phone is a Micro-USB port, flanked by a 3.5mm headphone jack, and a single loud speaker that is shrill and tinny. The lack of a USB Type-C port for charging and data transfers is quite disappointing. The industry has started transitioning towards USB Type-C and it is high time Honor starts adopting the same for its budget offerings as well.

The Honor 9N has a 5.84-inch full-HD+ IPS display with an 19:9 aspect ratio. The screen dominates much of the front fascia but is not exactly borderless. The chin is pretty significant. The display is one of the highlights of the smartphone. Viewing angles are spot on and the panel is bright, vivid, and punchy. The 19:9 aspect ratio also lends itself well to gaming and multimedia consumption and EMUI allows you to stretch third-party applications that do not support the aspect ratio natively.

The Kirin 659 processor is getting a bit old in the tooth and cannot compare to Qualcomm's newer mid-range offerings in terms of both power and efficiency. The Honor 9N handles basic day-to-day tasks like browsing the Web and using social media applications with ease but struggles when pushed. With multiple applications open in the background or more than a dozen tabs open in Chrome, we could feel the effects of the relatively underpowered processor. We also experienced keyboard lags and occasional slowdowns throughout our review period. With budget smartphones becoming more and more powerful, such slowdowns are quite disappointing.

In our experience, simple games like Subway Surfers ran fine but we experienced choppy frames with titles like Asphalt 8 every now and then.

Benchmark scores were very similar to other Kirin 659 powered smartphones. We got 5061 in PC Mark Work 2.0, 19fps in GFXbench T-Rex, 5.3fps in GFX Bench Manhattan 3.1, and 937 and 3731 in Geekbench's single- and multi- core tests respectively. We tried running AnTuTu multiple times but failed to get a result.

The smartphone did get warm when pushed, but not uncomfortably so. Calls were clear and crisp, and 4G connectivity was solid. The Honor 9N also supports face recognition, via the 16-megapixel front camera. It works quite well for the most part and is near instantaneous in good light, but it struggles somewhat in direct sunlight and when lighting is not the best.

The Honor 9N runs Android 8.0 Oreo out of the box, with Huawei's EMUI 8.0 custom skin on top. As of now, there is no information regarding the Android P update for this phone. In its past few iterations, EMUI has become much more responsive. In fact, Huawei claims that EMUI 8.0 is 60 per cent faster and 50 per cent smoother than EMUI 5.1. That said, it's still not as snappy as stock Android or even some custom builds such Oxygen OS.

EMUI is also loaded with a host of nifty features such as Wi-Fi+, which automatically switches between Wi-Fi and mobile data depending on which connection is stronger. The phone automatically switched over to mobile data at places where the Wi-Fi signal was rather poor, which was pretty convenient. The built-in messaging app has a useful feature that did a good job of recognising and filtering out spam messages. You also get several gestures such as a three-finger swipe to take a screenshot. We found most of these gestures to be rather flaky but your mileage may vary.

Facebook Messenger, TrueCaller and Netflix are pre-installed along with six Gameloft game demos. Thankfully, all of them can be uninstalled. There are a host of first-party Honor applications as well, which compete with Google's own and don't seem to add much value. Overall, the amount of bloat on the Honor 9N is quite disappointing.

Just like the Honor 9 Lite, battery life is mediocre. In our HD video loop battery test, the Honor 9N lasted just 8 hours and 40 minutes, which is well below the average for this market segment. With moderate use, we found ourselves reaching for the charger by 9-10pm every day. Our usage involved around an hour or two of Google Maps, frequent use of social media applications including WhatsApp, Twitter and Instagram throughout the day, games such as Asphalt 8, and taking a a couple of selfies and photos. The lack of fast charging means the phone takes around two and a half hours to charge fully.

On the imaging front, the Honor 9N features a dual rear camera setup with a 13-megapixel primary sensor, and a 2-megapixel secondary sensor alongside an LED flash. On the front, there is a 16-megapixel sensor.

The camera app is quite logically laid out and comes with a fully featured Pro mode, which allows you to alter the shutter speed, ISO, exposure, aperture, and white balance. AR stickers are a fun and nifty way to kill time and can be can be used with both the front and rear camera. There are 16 effects and 14 backgrounds on offer and more can be downloaded from Honor's AppGallery.

In favourable light, the rear camera takes above average photos. The level of detail is good and colours are quite accurate. Wide aperture mode lets you adjust the aperture value (f/0.95 - f/13) before - and even after - shooting an image. However, images taken in wide aperture mode often ended up looking like a Photoshop job gone wrong. The resultant shots were sub-par, with average edge detection.

In low light, the camera performs rather poorly. Photos lack detail and seem over sharpened. A fair bit of noise creeps in as well and focusing is also slow in unfavourable light. The front camera follows much of the same script - it struggles in low light but captures decent photos in favourable light. There's a beauty mode as well which offers 10 levels of beautification and works reasonably well. The front camera can also shoot bokeh shots via software algorithms (as there is no secondary sensor) but these are quite average and the blur effect does not even work half the time.

Both the front and rear camera setups support full-HD (1080p) video recording. Videos are lackluster at best and lack detail, especially at night. The lack of electronic image stabilisation means the footage can be shaky at times.

Verdict
The Honor 9N is a compact smartphone that sports a vibrant display, a fresh and modern design, and Android 8.0 Oreo out of the box. The colour options are also quite funky, especially Robin Egg Blue, which is set to go on sale soon. That said, battery life is mediocre, performance is below average, EMUI seems cluttered, and the cameras falter in low light.

If you want a sleek phone with a great display, the base variant of the Honor 9N makes for a good buy. The other variants are a bit too expensive though and are much harder to recommend. If you are shopping in this price segment, the Redmi Note 5 Pro (Review) is hard to beat as an all-rounder and the Asus ZenFone Max Pro M1 (Review) offers stellar value for money. Oppo's Realme 1 (Review) is also another option worth considering which has a more powerful processor but lacks a fingerprint sensor.

Does Honor 9N have what it takes to beat Redmi Note 5 Pro, Realme 1, Zenfone Max Pro M1? We discussed this on Orbital, our weekly technology podcast, which you can subscribe to via Apple Podcasts or RSS, download the episode, or just hit the play button below.