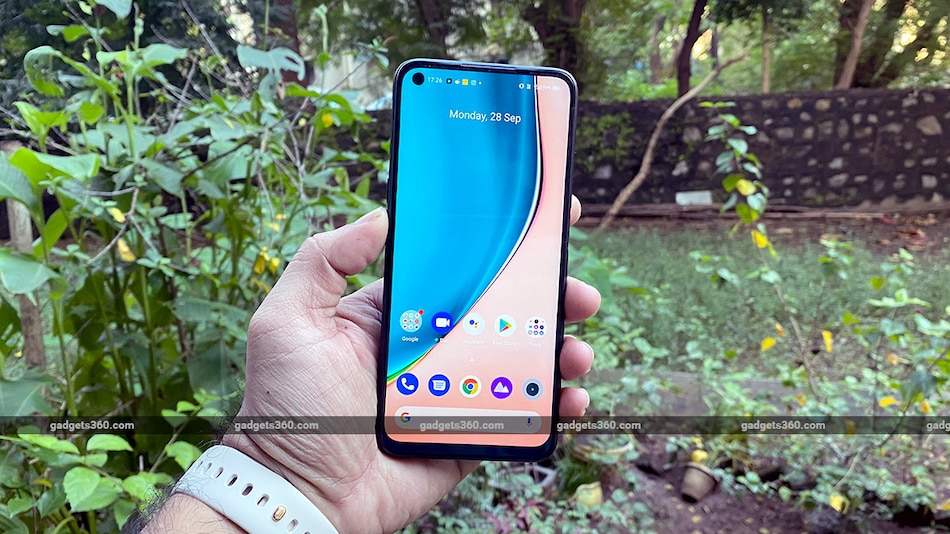 The Realme Narzo 20 Pro has a hole-punch display

The Realme Narzo 20 Pro shares the same design as the Realme 7 (Review); a move probably intended to keep costs down. As a result, you get two phones that look similar but belong to two different series – much like the situation with the Narzo 20 (Review) and Realme C15 (Review). Realme has put a different pattern on the back of the Narzo 20 Pro and offers different colour options. At the front, it sports a 6.5-inch display with a camera hole in the top left corner. I did not not have any issues with this while using the smartphone but some might find it distracting.

Just like the Realme 7, the Narzo 20 Pro has a side-mounted fingerprint scanner placed on the power button. When holding the phone with either hand, a finger rests on the scanner naturally. Thankfully, the volume buttons are moved over to the other side of the device, which makes them easy to hit.

The Narzo 20 Pro has a quad-camera setup, which isn't surprising. This camera module looks identical to the one on the Realme 7, but Realme has changed the primary sensor. The back panel has a V-shaped pattern that shines when light bounces off it at the right angle. I found that the glossy back panel picks up smudges quite easily, but Realme includes a case in the box that can be used to avoid this.

Realme has used a 4,500mAh battery for the Narzo 20 Pro, which is slightly smaller than that of the Realme 7. Surprisingly, this is actually two 2,250mAh cells, in order to enable faster charging. The Narzo 20 Pro supports Realme's proprietary 65W SuperDart charging, with a suitable charger bundled in the box. The Narzo 20 Pro weighs 191g which is acceptable given its size and the battery it packs in.

The similarities with the Realme 7 don't end at design; in fact the two phones share the same processor as well. Realme has opted for the same MediaTek Helio G95 for the Narzo 20 Pro. This is an octa-core processor with two Cortex-A76 cores clocked at 2.05GHz while six Cortex-A55 cores are clocked at 2GHz. You get two variant choices: 6GB of RAM with 64GB of storage, and 8GB of RAM with 128GB of storage, I had the latter for this review. The base variant is priced at Rs. 14,999 while the higher variant is priced at Rs. 16,999.

You also get a 90Hz full-HD+ display on the Narzo 20 Pro. High-refresh-rate panels aren't very common at this price point but Realme does offer them on a few models already. The Narzo 20 Pro automatically selects the refresh rate based on activity but you can also set it manually. I could also tweak the colour temperature of the panel.

The Narzo 20 Pro runs Realme UI on top of Android 10, and my unit had the August Android security patch which is fairly recent. Realme UI does have a few customisations such as App Lock, which can be used to lock down apps, and Private Space, which allows you to encrypt your photos, videos, and other files with a password. The UI is very easy to use, and I could navigate around it without any issues. Realme Narzo 20 Pro does have a few preinstalled apps such as Facebook, Realme Community, Realme Pay and a few more which I would recommend that you uninstall if you don't use them.

The Narzo 20 Pro gave me no reason to complain in everyday use. It was quick to load apps, and switching between them was a breeze. The fingerprint scanner and face recognition were quick to unlock the device. While casual users are covered, even heavy users won't have any issues with respect to performance when using the Narzo 20 Pro.

This phone did not disappoint me in terms of benchmarks either, posting 300,326 points in AnTuTu 8, and 9,855 points in PC Mark Work 2.0. It also fared well in graphics benchmarks, managing 45fps and 17fps in GFXBench's T-Rex and Car Chase benchmarks respectively.

I played Call of Duty on the smartphone, and it defaulted to the medium graphics preset. The game ran fine at these settings without any stutter. I played for 15 minutes, which resulted in a 6 percent battery drop. The phone was also warm to the touch after gaming.

Battery life of the Realme Narzo 20 Pro was great. The phone could easily go about a day and a half with my usage. Even if you are a heavy user you should be able to get a full day's worth of battery life per charge very easily. In our HD video loop test, the Narzo 20 Pro managed 20 hours and 12 minutes, which is very good. What's even better is Realme's bundled 65W SuperDart charger. It got the phone to 50 percent in just fifteen minutes, and charging it completely took about 40 minutes. This is quite fast, and such charging speeds are rare at this price point.

Realme Narzo 20 Pro cameras: Not the best in low light

The quad-camera setup on the Narzo 20 Pro consists of a 48-megapixel primary camera, an 8-megapixel ultra-wide angle camera, a 2-megapixel black-and-white portrait camera, and a 2-megapixel macro camera. The camera app is very easy to use and the commonly used modes can be accessed by swiping on the main screen. There's a sub-menu for additional shooting modes.

The Narzo 20 Pro takes 12-megapixel shots by default and has decent dynamic range. The AI can detect what the camera is pointed towards, and sets the camera up accordingly. Colours were accurate and objects at a distance had good details. The wide-angle camera delivers a lower resolution output and there is a noticeable drop in quality. Shots also have barrel distortion at the edges. You do have the option to take shots at the full 48-megapixel resolution but these aren't as good, and I noticed a watercolour effect on magnifying these shots.

Close-ups were good, and the Narzo 20 Pro managed sharp results with a soft blur for the background. Portrait shots were decent but I noticed that the AI does not detect objects very well. However, it can detect faces. It also let me set the level of blur before taking the shot. The Macro camera lets you get very close to a subject but the image resolution is low and the results aren't very sharp.

Low-light camera performance was strictly average, and photos appeared flat. Switching to Night mode returned slightly brighter results with improved details but the phone takes around three seconds per shot. The wide-angle camera does not capture as much light as the primary one, and while it offers a wider field of view, it misses out on details. There is the option to take photos in Night mode using the wide-angle camera, but the resulting difference in quality is marginal.

Selfies taken with the Realme Narzo 20 Pro were decent, and the output was smoothened. You can also take portraits using the selfie camera, and it lets you set the level of blur. Portraits were good, with decent edge detection. Low-light selfies were below average.

The Realme Narzo 20 Pro packs in some powerful hardware and might check all the boxes for a power user. The Helio G95 SoC can handle heavy apps and games easily, and the big battery does deliver good battery life. What is particularly impressive is the 65W charging, which is a big plus if you are a little absent-minded about charging your smartphone. Low-ight camera performance could do with some improvement.

If you can live with the camera performance, the Narzo 20 Pro is a good performer for the price. However, there really isn't much difference between this phone and the Realme 7 (Review), making the latter model a suitable alternative.