Dyson Air Purifiers and Vacuum Cleaner Are Coming to India: Here’s What You Can Expect 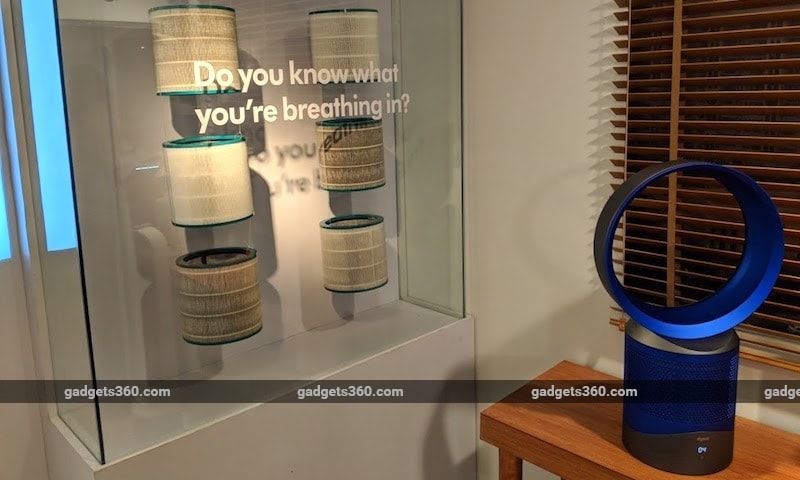 Dyson, the British company that's famous for its vacuum cleaners and “blade-less" fans (called air multipliers) is officially entering the India market early next year. The company will be opening a Dyson store in Delhi's DLF Promenade mall where it will be showcasing - and, of course, selling - its air purifiers,vacuum cleaner, and a premium supersonic hair dryer. At a special preview event in Delhi, Gadgets 360 got a chance to look at some of these products in action, and talk to the engineers that helped designed the products.

The company's been described as the "Apple of appliances” - a tag that founder and Chief Engineer James Dyson apparently hates - and it's reputedly fanatical about customer service. Talking to the team, there's a sense of the obsession that comes through. For example, Chris Osborne, head of personal care at Dyson, talked to Gadgets 360 about how the company tested its hair dryer. "We tested the hair dryer with 1,600 kilometres of real human hair," Osborne said. "We already had a good understanding of airflow and battery technology, but to make the hair dryer we needed to understand about hair. Some people test with synthetic materials and fibres, but that's not going to tell you enough."

Standing in front of a shelf with various kinds of hair on it, he added: "and we needed to test different types of hair, different thickness, curliness, to get a proper understanding."

The idea of a number of engineers poring over strands of hair might sound odd, but that wasn't the end of things. Dyson engineers also went to hairstyling college. "Most of the engineers at Dyson have short hair like me, so we needed to know how stylists and consumers would use the hairdryer," Osborne added. "So you can imagine some 30 middle-aged guys going to salons to observe the products being used, and learning how to style hair."

An air purifier that actually looks good
One product that feels particularly needed right now is the air purifier. Dyson has two products in this category, called the Dyson Cool Pure Link, available in a desktop and tower version. The tower version is bigger, with a larger filter and greater airflow, and obviously, it's a little more expensive too. The name actually highlights the different functions of the product - Cool because it's a cooling fan (like the Dyson Air Multiplier), Pure because it comes with a HEPA and glass filter (more on this below), and Link because it's a connected device, which can be controlled and monitored through a paired app.

Like the Air Multiplier before, the Pure products are stunning to look at. There's a timeless elegance to the design and although we've tried a lot of different air purifiers so far, none can measure up to the Dyson in terms of aesthetics. It is simultaneously stylish and sci-fi in its looks. But the design also serves the function of the product, which is something the company has long touted for all its products.

James D'Souza, a fluid dynamics engineer at Dyson explained how it works. "What happens with a lot of the air purifiers is that they are sitting in a corner and puffing air up," he said. "They don't actually circulate the good air." With the Dyson Pure devices, on the other hand, the same principle as the air multiplier creates a low pressure zone along the side of the arch, bringing in a greater volume of air and thus cooling the room and circulating air more effectively.

At the same time, D'Souza said that the purifier doesn't move air as quickly as the Air Multiplier. This is because it has to avoid an excessive "face velocity" - the speed at which the particles in the air are hitting the filter. "When you look at it, the filter is a mesh to keep the particles out, and the really small particles, if they're moving fast enough, are likely to pass through," said D'Souza. For that reason, intelligently managing the airspeed is a critical function.

The top of the purifier lifts off easily to reveal the filter, and it can be changed out with one had. The 360-degree filter looks a little like a squatter version of the one in a Xiaomi Mi Air Purifier 2, but unlike that one, Dyson's purifier is using a HEPA filter. Glass fabric is pleated 230 times to create the filter, and there's a second filter of activated carbon so that almost all particles can be filtered out. "It filters out 99.95 percent of PM 0.1 particles," said D'Souza.

Although he's reluctant to break down the details of the filter into further specifications as there are too many variables, he says that the company sees an effective range of 200 to 250 square feet for the two purifiers. The frequency with which you'll have to change the filters is another thing he doesn't want to be tied down on, although depending on the air conditions and the frequency of usage, this could be anything between once in a year, every six months, or once a quarter.

Some third parties have estimated a CADR of 75 cubic meters per hour; that's significantly lower than most other air purifiers on the market, but until we've had a chance to test the purifier and measure its effectiveness with a laser particle counter, we can't really comment on its efficiency.

A cross section of the Dyson air purifier

A premium lifestyle product
One thing that's undeniable is that all three products showcased at the event in Delhi are highly aspirational and beautiful. They look smaller and sleeker than anything in the same category, and they're designed in a much more thoughtful manner, to be easier to use, hold, and maintain.

For example, the V8 vacuum comes with a stylish wall hanger that doubles up as a charging station; there are attachments on the same hanger that can store the various accessories that come with the vacuum out of the box.

At the demo session, Kevin Grant, the head of the floorcare division at Dyson shows us the product in action, with the different attachments and talks us through the engineering that goes into the simple device. It's pretty impressive, and after having tried it out a little, we couldn't help but love the simple yet attractive design.

But these are also premium lifestyle products. The company hasn't decided India pricing, or even the exact launch date, but it'll most likely be in line with the global pricing. In the UK, the air purifiers go for GBP 399 onwards, while the vacuum cleaner bundle with all attachments which is coming to India retails at GBP 499. Based on that, you can expect a price of somewhere around Rs. 40,000 and Rs. 50,000 respectively.

At those prices, these stop being utility products, and are much more aspirational. But while that makes sense when looking at products like smartphones, does it hold true for vacuum cleaners and hair dryers? Particularly in a country where people are not accustomed to doing the smallest of things for themselves, it's going to be a hard sell.