The James Webb Telescope is expected to revolutionise astronomy. 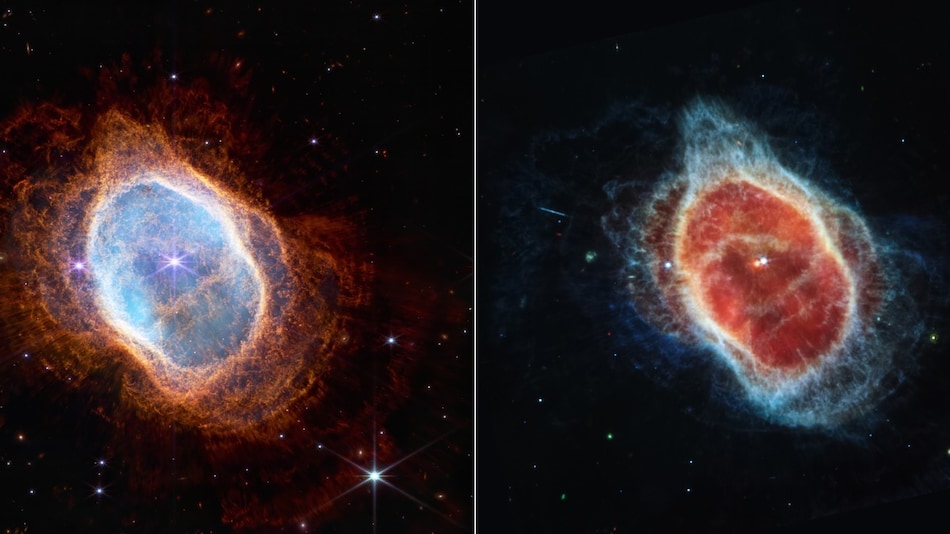 NASA officials gathered on Tuesday to unveil first full-colour images from the James Webb Space Telescope, the largest and most powerful orbital observatory ever launched. The first batch of full-colour, high-resolution pictures, which took weeks to render from raw telescope data, were selected by NASA to provide compelling early images from Webb's major areas of inquiry and a preview of science missions ahead. NASA had shared the first image on Monday, and on Tuesday, unveiled four more.

The James Webb Telescope is expected to revolutionise astronomy by allowing scientists to peer farther than before and with greater clarity into the cosmos, to the dawn of the known universe. The full list of published images can be seen here.

Explaining the image of the Southern Ring Nebula, seen above, NASA in its release said, "Some stars save the best for last. The dimmer star at the center of this scene has been sending out rings of gas and dust for thousands of years in all directions, and NASA's James Webb Space Telescope has revealed for the first time that this star is cloaked in dust. Two cameras aboard Webb captured the latest image of this planetary nebula, cataloged as NGC 3132, and known informally as the Southern Ring Nebula. It is approximately 2,500 light-years away."

It added, "Two stars, which are locked in a tight orbit, shape the local landscape. Webb's infrared images feature new details in this complex system. The stars – and their layers of light – are prominent in the image from Webb's Near-Infrared Camera (NIRCam) on the left, while the image from Webb's Mid-Infrared Instrument (MIRI) on the right shows for the first time that the second star is surrounded by dust.

WASP-96 b as seen by the James Webb Telescope
Photo Credit: NASA, ESA, CSA, and STScI

Explaining the second image (seen above), the atmosphere composition of exoplanet WASP-96 b, NASA in its release said, "NASA's James Webb Space Telescope has captured the distinct signature of water, along with evidence for clouds and haze, in the atmosphere surrounding a hot, puffy gas giant planet orbiting a distant Sun-like star... The observation, which reveals the presence of specific gas molecules based on tiny decreases in the brightness of precise colors of light, is the most detailed of its kind to date, demonstrating Webb's unprecedented ability to analyze atmospheres hundreds of light-years away."

"On June 21, Webb's Near-Infrared Imager and Slitless Spectrograph (NIRISS) measured light from the WASP-96 system for 6.4 hours as the planet moved across the star. The result is a light curve showing the overall dimming of starlight during the transit, and a transmission spectrum revealing the brightness change of individual wavelengths of infrared light between 0.6 and 2.8 microns... The spectrum of WASP-96 b captured by NIRISS is not only the most detailed near-infrared transmission spectrum of an exoplanet atmosphere captured to date, but it also covers a remarkably wide range of wavelengths, including visible red light and a portion of the spectrum that has not previously been accessible from other telescopes."

Explaining the third image, seen above, NASA said, "This landscape of 'mountains' and 'valleys' speckled with glittering stars is actually the edge of a nearby, young, star-forming region called NGC 3324 in the Carina Nebula. Captured in infrared light by NASA's new James Webb Space Telescope, this image reveals for the first time previously invisible areas of star birth."

It added, "Called the Cosmic Cliffs, Webb's seemingly three-dimensional picture looks like craggy mountains on a moonlit evening. In reality, it is the edge of the giant, gaseous cavity within NGC 3324, and the tallest “peaks” in this image are about 7 light-years high. The cavernous area has been carved from the nebula by the intense ultraviolet radiation and stellar winds from extremely massive, hot, young stars located in the center of the bubble, above the area shown in this image."

As for the fourth and final image (seen above), NASA said, "Stephan's Quintet, a visual grouping of five galaxies, is best known for being prominently featured in the holiday classic film, 'It's a Wonderful Life.' Today, NASA's James Webb Space Telescope reveals Stephan's Quintet in a new light. This enormous mosaic is Webb's largest image to date, covering about one-fifth of the Moon's diameter. It contains over 150 million pixels and is constructed from almost 1,000 separate image files. The information from Webb provides new insights into how galactic interactions may have driven galaxy evolution in the early universe."

It added, "With its powerful, infrared vision and extremely high spatial resolution, Webb shows never-before-seen details in this galaxy group. Sparkling clusters of millions of young stars and starburst regions of fresh star birth grace the image. Sweeping tails of gas, dust and stars are being pulled from several of the galaxies due to gravitational interactions. Most dramatically, Webb captures huge shock waves as one of the galaxies, NGC 7318B, smashes through the cluster."

A partnership between NASA, the European Space Agency and the Canadian Space Agency, the Webb was launched on Christmas Day, 2021, and reached its destination in solar orbit nearly 1 million miles from Earth a month later.

Once there, the telescope underwent a months-long process to unfurl all of its components, including a sun shield the size of a tennis court, and to align its mirrors and calibrate its instruments.

With Webb now finely tuned and fully focused, astronomers will embark on a competitively selected list of science projects exploring the evolution of galaxies, the life cycles of stars, the atmospheres of distant exoplanets and the moons of our outer solar system.

The introductory assortment of pictures had been a closely guarded secret until Friday, when the space agency posted a list of five celestial subjects chosen for its big reveal on Tuesday at NASA's Goddard Space Flight Center in Maryland.

Whoops and hollers from a spritely James Webb “cheer team” welcomed some 300 scientists, telescope engineers, politicians and senior officials from NASA and its international partners into a packed and lively auditorium ahead of opening remarks.

"I didn't know I was coming to a pep rally today," NASA Administrator James Nelson said from the stage, enthusing that Webb's "every image is a discovery."

US President Joe Biden got a jump on the unveiling with his own White House briefing on Monday to release the very first photo - an image of a galaxy cluster dubbed SMACS 0723 revealing the most detailed glimpse of the early universe recorded to date.

Among the four other Webb "targets" getting their closeups on Tuesday are two enormous clouds of gas and dust blasted into space by stellar explosions to form incubators for new stars - the Carina Nebula and the Southern Ring Nebula, each thousands of light years away from Earth.

The debut collection includes another galaxy cluster known as Stephan's Quintet, which was first discovered in 1877 and encompasses several galaxies described by NASA as "locked in a cosmic dance of repeated close encounters."

NASA will also present Webb's first spectrographic analysis of an exoplanet - one roughly half the mass of Jupiter that lies more than 1,100 light years away - revealing the molecular signatures of filtered light passing through its atmosphere.

Built to view its subjects chiefly in the infrared spectrum, Webb is about 100 times more sensitive than its 30-year-old predecessor, the Hubble Space Telescope, which operates mainly at optical and ultraviolet wavelengths.

The much larger light-collecting surface of Webb's primary mirror - an array of 18 hexagonal segments of gold-coated beryllium metal - enables it to observe objects at greater distances, thus further back in time, than Hubble or any other telescope.

All five of Webb's introductory targets were previously known to scientists, but NASA officials promise Webb's imagery captures its subjects in an entirely new light, literally.

WhatsApp Head Issues Warning To All Android Users: All You Need to know
Twitter Sues Elon Musk for Breach of $44 Billion Deal, Calls His Exit Strategy 'A Model of Hypocrisy'