Rover to Carry Earth's Art to the Moon 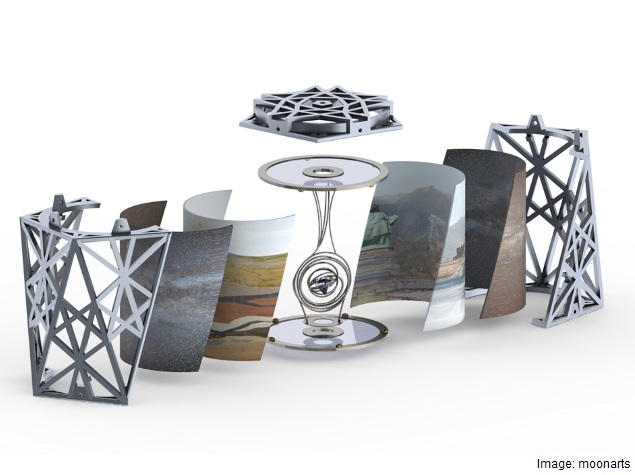 A team of international researchers has put together some of the world's best art, poetry, music, drama, and dance onto small disks and plans to send them to the Moon aboard a rover next year.

The rover developed by the Carnegie Mellon University's Robotics Institute will compete on the Moon for the Google Lunar Xprize, a $30 million (roughly Rs. 190 crores) contest to land a privately funded robot on the lunar surface.

Carnegie Mellon's robot plans to take gifts to the Moon in the form of the small disks containing data on Earth's art, 'Tech Times' reported.

The Ark is four elaborate chambers that each hold four engraved sapphire disks, metal sculptures, microcapsules containing evidence of life on earth, high-resolution dye sublimation imagery on metal foil, and a variety of information in the form of data, imagery and physical traces.

To be part of the payload, the Ark must weigh no more than 6 ounces volume or half a can of soda.

The Moon Arts team has accomplished this technical feat and the chamber prototypes are completed. While the Ark must endure a journey through space, work reliably under extreme conditions on the lunar surface, and remain operational for what could be millions or billions of years, an exact replica of the Moon-bound one will be constructed for future exhibition on Earth.

Mark Baskinger, co-principal investigator of the Moon Arts Group and an associate professor in the CMU School of Design, called the Ark and its contents a capsule of life on Earth, meant to help illustrate a vital part of the human existence: the arts.

"If this is the next step in space exploration, let's put that exploration into the public consciousness," he said. "Why not get people to look up and think about our spot in the universe, and think about where we are in the greater scheme of things?" Baskinger said.