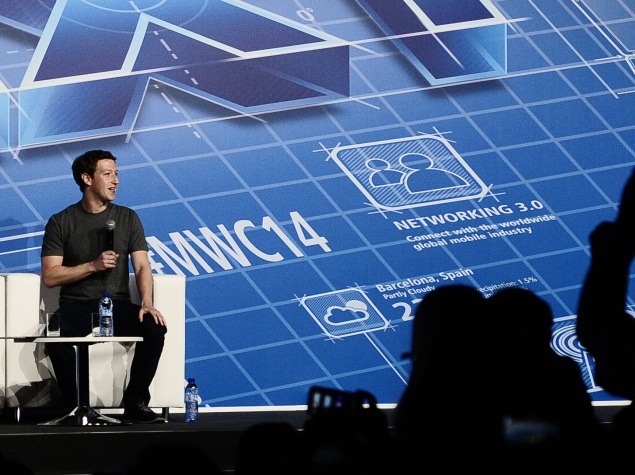 Longtime technology analyst Roger Kay wonders whether Zuckerberg "is nuts" for agreeing to pay $2 billion for Oculus less than five weeks after inking a deal to buy WhatsApp for $19 billion.

Oculus, which got its start on the crowdfunding site Kickstarter, doesn't have a consumer product on the market, just the promise of bulky virtual reality goggles that have generated huge buzz in the video gaming community.

Zuckerberg, for his part, sees long-term implications in the technology, for communication, entertainment and beyond. He was right about mobile, and he's created the world's biggest online social network.

So, is he loony, or visionary?

"Mobile is the platform of today and now we're starting to also get ready for the platforms of tomorrow. To me, by far the most exciting future platform is around vision or modifying what you see to create augmented and immersive experiences," Zuckerberg said on a conference call Tuesday discussing the deal. "Today's acquisition is a long-term bet on the future of computing. I believe Oculus can be one of the platforms of this future."

Facebook's investors seem to think Oculus's promise is too far off. The Menlo Park, Calif.-based social networking company's stock fell 7 percent on Wednesday to close at $60.38.

Beyond sticker shock, the WhatsApp and Oculus deals - along with the Facebook's spurned offer to buy SnapChat for $3 billion- have raised questions about Facebook's ability to innovate on its own. Some of the company's most high-profile products, such as the SnapChat-like Poke, the messaging service Facebook Messenger and Home, have flopped. The jury's still out on Paper, a stand-alone app that lets users read news, Facebook feeds and more.

"Facebook I don't think has the best innovation strategy," says Gartner analyst Brian Blau. "So far it's been ' move fast and break things.' Move fast is good, but break thinks, may not be."

Blau calls the Oculus acquisition "kind of out of left field."

"We have always thought about experience as a focus of virtual reality," he says. "Certainly it can be social, but we have not thought about it as a core social experience."

That's not to say it can't work. There were questions about Facebook's acquisition of Instagram back when it offered $1 billion for the photo-sharing app (the final purchase price was $715 million) in April 2012 -and Instagram "turned out fine," Blau points out. Facebook said Tuesday that Instagram has 200 million users, up from 30 million at the time it agreed to buy the company.

As the former CEO and co-founder of MySpace, Chris DeWolfe has learned the hard way that Zuckerberg knows what he is doing. MySpace once reigned as the Internet's largest social network only to be eclipsed by Facebook as Zuckerberg constantly tweaked the service and added more compelling features.

Now, DeWolfe runs a mobile game company called SGN and has been impressed by Facebook's ability to target smartphone ads at the people most likely to be attracted to SGN's pastimes, which include "Cookie Jam" and "Bingo Blingo."

Although he has no idea what Zuckerberg will do with Oculus, DeWolfe figures Facebook's $154 billion market value gave him the flexibility to wager on a technology that could break new ground. "Given Facebook's size, this deal doesn't seem that weird to me," DeWolfe said.

Oculus is a horizontal acquisition for Facebook, which means it lets the company expand into a new space, rather than grow its core business. It's a strategy employed by Amazon.com Inc., whose businesses range from online retail to video streaming to tablets, and Google Inc., which recently bought high-tech thermostat and smoke-detector maker Nest Labs for $3.2 billion.

Like Facebook, Google is led by a CEO, Larry Page, who has vowed to make huge investments building or buying technology that might not pay off for years. Page can do pretty much as he pleases, too, as long as he gains the support of fellow co-founder Sergey Brin and Google Executive Chairman Eric Schmidt. The trio collectively controls enough votes to overrule the rest of Google's shareholders.

Google has made more than 230 acquisitions since going public nearly a decade ago, but most of those deals have been relatively small for a company that now generates more than $50 billion in annual revenue.

A few of the deals have been large enough for some investors to wonder whether Google's brain trust had lost its senses.

When Google bought YouTube in 2006 for $1.76 billion in stock, some analysts questioned whether the company had paid far too much for a video site with virtually no revenue and a huge stack of potentially expensive legal claims for copyright infringement. But that deal is now widely viewed as a brilliant move. YouTube has productive relationships with most movie and television studios and sells billions of dollars in video advertising while amassing a worldwide audience of more than 1 billion people.

Google's biggest acquisition, a $12.4 billion purchase of troubled cellphone maker Motorola Mobility, turned out to be a dud, just as many analysts predicted it would be when the deal was announced in 2011. Google wound up selling all of Motorola's device divisions for a combined $5.25 billion, leaving the company with a portfolio of mobile patents that help ward off lawsuits against Google's Android software.

Android, meanwhile, now the world's most popular mobile operating system, is among several smaller deals that have yielded huge dividends for Google. Google bought Android Inc. in 2005. Its price was too small to require disclosure.

Vodafone to bring M-Pesa service to 20,000 customers in MP
Central government employees to be prohibited access to social media at work