Jio Phone 2, Jio GigaFiber, and All Other Jio Announcements at Reliance AGM 2018 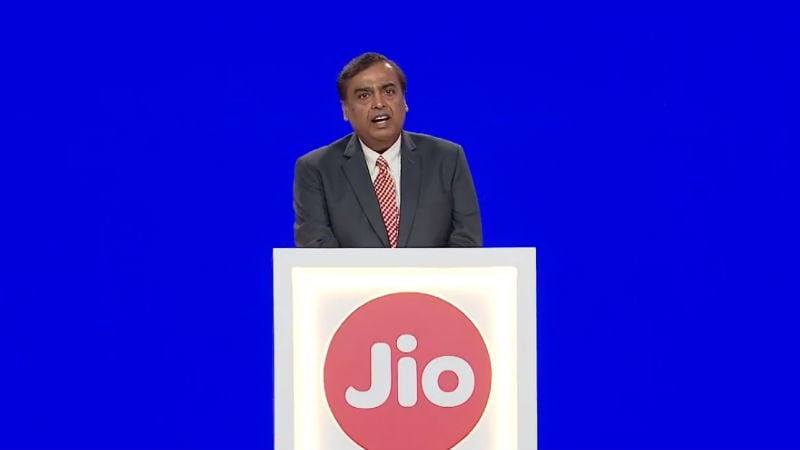 At Reliance Industries' 41st Annual General Meeting (AGM) on Thursday, Chairman Mukesh Ambani made several announcements including the new broadband service Jio GigaFiber. He listed Jio's landmark achievements in the last year and also shared a roadmap for several upcoming launches. Reliance Jio has already crossed the 200 million subscriber mark in close to 22 months of its launch, and there are no signs of it stopping. Apart from the upcoming broadband services, the announcements included WhatsApp and YouTube support in the Jio Phone, the launch of Jio Phone 2 and Jio Smart Home accessories suite, and more. Additionally, Ambani also told shareholders that the company is planning to integrate online and offline marketplaces using its flagship technology platform Jio. While Jio GigaFiber and Jio Phone 2 took away most of the spotlight at the event, here are all the important things announced at Reliance AGM 2018.

Reliance has officially launched Jio GigaFiber fibre-to-the-home (FTTH) broadband service. Formerly known as Jio Fiber, the company plans to extend fibre connectivity to homes, merchants, small and medium enterprises and large enterprises simultaneously across 1,100 cities. The Mukesh Ambani-led Reliance Jio claims the Jio GigaFiber is one of the most advanced fibre-based broadband connectivity solutions, and provides speeds up to 1Gbps.

The Jio GigaFiber is being touted as an all-in-one solution that takes care of broadband, IPTV, landline, video conferencing, virtual reality gaming, and beyond. It will also work on TVs with the help of GigaTV set-top boxes and smart home devices. Those with GigaTV will also be able to make phone calls to other TVs, phones and tablets on Jio GigaFiber networks.

Interested buyers can register for the Jio GigaFiber service from August 15 via MyJio or Jio.com. The company will prioritise the rollout of Jio GigaFiber in localities based on the interest it has received from registrations. Jio GigaFiber will compete with leading broadband service providers, as well as satellite cable operators.

At the RIL AGM, the Jio Phone 2 4G feature phone was launched. It comes with a few improvements in terms of design compared to the model that was launched in 2017. Jio Phone 2 is claimed to be the high-end variant of Jio Phone, though it appears to bear the same specifications. It will be available at an introductory price of Rs. 2,999 from August 15. The phone comes with a full QWERTY keypad and supports horizontal screen viewing. Support for popular applications like WhatsApp and YouTube was also announced for the Jio Phone 2 as well as the original handset launched last year.

Jio Phone Gets WhatsApp, YouTube Support
Last year, Reliance had launched the Jio Phone with an aim to provide 4G network and free voice calling to feature phone users in India. As mentioned, the company claims that there are almost 25 million Jio Phone users in India. Owing to the growing popularity of the Jio Phone in the country, major companies and app makers appear to be showing interest in bringing their apps to this untapped feature-phone-using audience.

To this effect, Google and Facebook have now introduced support for YouTube and WhatsApp on all Jio Phone handsets. Both apps will become available to every Jio Phone user from August 15, possibly via the Jio App Store. Notably, Jio Phone and Jio Phone 2 users will be able to send WhatsApp messages to both Android and iOS users as well. As of now, there is no clarity on whether all features that are available for WhatsApp and YouTube users on Android and iOS will make it to Jio Phone or not.

Jio crosses 200 million broadband subscriber mark
Reliance, at the event, revealed details about the achievements of its Jio network. While addressing shareholders at Reliance Industries' AGM, Mukesh Ambani said that Reliance Jio has 215 million customers now within 22 months of its start. He also says that in the duration, the data usage has grown from 125 crore GB to more than 240 crore GB per month. According to the details shared by Ambani, Jio subscribers, on an average, use the company's network for more than 290 minutes per day. The company, Ambani said, has doubled the network capacity in two years. The capacity utilisation is less than 20 percent, added Ambani.

Ambani claimed that the telco has the widest 4G coverage, and is on track to cover 99 percent of the population. He said that Jio will be present in every district, gram taluka, village of India. It was also announced at the event that the Jio Phone now has more than 25 million users in India.

Jio Brings Smart Home Accessories Suite
The Jio Smart Home Accessories Suite was also unveiled on Thursday, and it includes TV camera, plugs, doorbells, Wi-Fi extender, and more. The accessories can be used to control the entire home via the MyJio application. Apart from the major connected devices, Jio is set to bring the smoke sensor, water leak sensor, siren, gas leak sensor, panic button, door sensor, and smart video doorbells. These have been designed to let users control and monitor their homes remotely using their smartphones. The prime purpose of the new launch is to expand the presence of connected homes in India.

The new devices will enable Jio users to control and monitor "every aspect" of their homes, including temperature, lighting, electrical appliances, gas and water leakage, motion detection, and opening and closing of doors and windows. The devices will also enable remotely caring for babies and elderly, the company said at the meeting.

Hybrid Online-to-Offline Retail Platform
The company sees its biggest growth opportunity "in creating a hybrid, online-to-offline new commerce platform". This new commerce platform will be created through the integration of Reliance's offline retail arm and online technology platform. "We shall create this by integrating and synergising the power of Reliance Retail's physical marketplace with the fabulous strengths of Jio's digital infrastructure and services," Ambani told the gathering. Addressing shareholders, Mukesh Ambani told them that the year ahead will be a defining moment for the company, adding that the company's focus is now on integrating their businesses

Is Jio Phone 2 the perfect smart feature phone for the masses? We discussed that on Orbital, our weekly technology podcast, which you can subscribe to via Apple Podcasts or RSS, download the episode, or just hit the play button below.