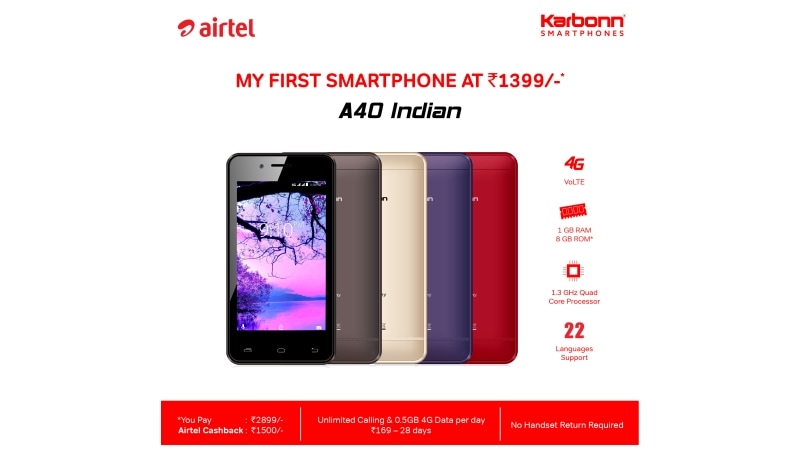 Taking on the JioPhone 4G feature phone with smartphones, Airtel has partnered 4G device manufacturers in India for its 'Mera Pehla 4G Smartphone' initiative. The first fruit of these partnerships is with Karbonn Mobiles, with the Karbonn A40 Indian said to now be available at an 'effective price' of Rs. 1,399. With its announcement using the same terminology, Airtel is clearly targeting the Reliance JioPhone that was marketed to have an effective price of zero.

Airtel says its 'Mera Pehla 4G Smartphone' initiative, also called 'My First Smartphone', is aimed at "enabling every Indian to buy a 4G smartphone and get on to the digital superhighway." Airtel added that the initiative will bring "highly affordable bundled 4G smartphone options to the market and fulfill the digital aspirations of millions of Indians." Smartphones under the initiative will be available from offline stores, with after sales being handled by the device manufacturers themselves.

The telecom operator detailed just how the Karbonn A40 Indian, which was launched back in July and is said to currently have a market price of Rs. 3,499, will be available at an 'effective price' of Rs. 1,399. Customers will need to make a down payment of Rs. 2,899 for smartphone, and then make a minimum amount of recharges over the course of three years to receive cashbacks totaling Rs. 1,500. Subtracting the cashback from the down payment for the phone gives the smartphone an 'effective price' of the Rs. 1,399. The 'cash refunds' will be made in the form of payments to the user's Airtel Payments Bank account.

While Airtel mentions users can make recharges of any denomination, the company is offering a bundled plan of Rs. 169 per month to ostensibly simply the eligibility. Rs. 169 over 36 months totals to Rs. 6,084. The Rs. 169 recharge has a 28-day validity, and offers unlimited calling (subject to a fair usage policy) and 0.5GB of high-speed data a day. For handsets other than the Karbonn A40 Indian, the plan will have a 14-day validity.

Airtel says the Karbonn A40 Indian smartphone will be "completely with the customer, and there is no need to return the device to Airtel/ Karbonn at any point to claim the cash benefit." In its press statement announcing the initiative, Airtel was quick to point out that Karbonn A40 Indian (and the other smartphones it intends to include) have access to the Google Play store, and popular apps such as Facebook, WhatsApp, and YouTube, something the Jio Phone has been criticised to be missing. It is also touting the dual-SIM slots and full touchscreen experience.

Raj Pudipeddi, Director - Consumer Business & CMO, Bharti Airtel said, "As the market leader and pioneer of 4G services in India, Airtel's aspiration is to digitally empower every Indian with high speed data access. We are delighted to partner with Karbonn to remove barriers to smartphone adoption and enable millions of Indians to leapfrog to a full touchscreen smartphone experience. We plan to partner with multiple manufacturers to bring affordable smartphone options to the market and build an 'open ecosystem' of low cost devices. This is yet another step in our ongoing journey to deeply understand customers and bring innovation that delights them."