The video shows a Tesla Model 3 striking the child-sized dummy at the end of a road with no other obstructions. 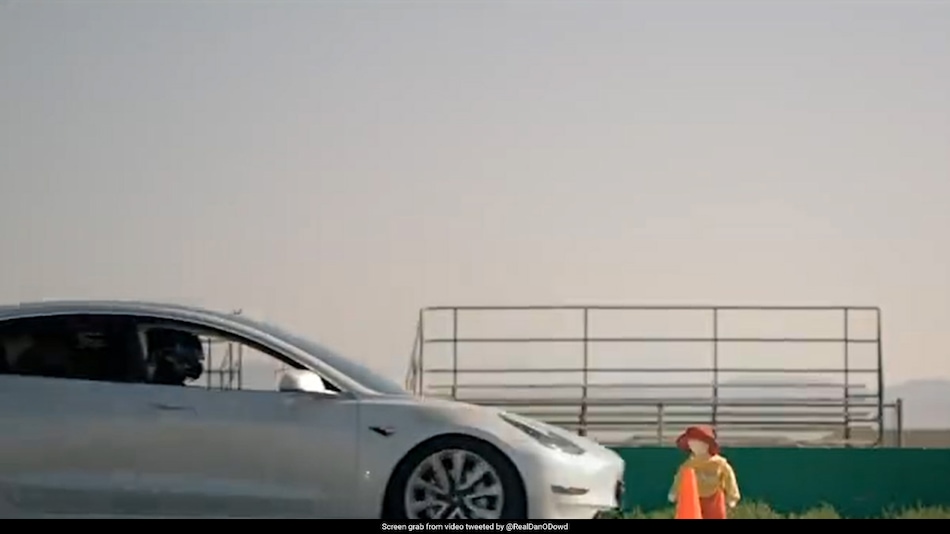 Tesla has not yet responded to the video.

A video shared on Twitter claims to show a Tesla in full self-driving mode running over a child-size mannequin during a test by a safety campaign group. According to the test conducted by the Dawn Project, the latest version of Tesla Full Self-Driving (FSD) Beta software failed to detect the stationary dummy's presence on the road and hit it over and over again.

The advocacy group said the video is now airing as a TV commercial to demand a ban on Tesla FSD "until Elon Musk proves it won't mow down children". It also added that the experiment was carried out under "controlled conditions" on a test track in California.

Our new safety test of @ElonMusk's Full Self-Driving Teslas discovered that they will indiscriminately mow down children.

The video shows a Tesla Model 3 striking the child-sized dummy at the end of a road with no other obstructions. The test was carried out by a professional test driver, who was tasked with driving between two rows of cones at an average speed of 40kmph.

In a blog post, the Dawn Project said, "Our Tesla Model 3, equipped with the latest version of Full Self-Driving Beta software (10.12.2) repeatedly struck the mannequin in a manner that would be fatal to an actual child."

As per The Guardian, the advocacy group's founder Dan O'Dowd also slammed the FSD software as a "lethal technology". He stated that over 100,000 Tesla drivers are already using the car's Full-Self Driving mode on public roads, putting children at "great risk" in communities across the country.

On the other hand, Tesla has not yet responded to the video, but it has repeatedly hit back at claims that its self-driving technology is too underdeveloped to guarantee the safety of either the car's occupants or other road users. As per the outlet, earlier this month, Elon Musk had even said that the Full Self-Driving has greatly improved, and he expected to make the software available by the end of the year to all owners that request it.