As of now, Uber seems to be the only supported partner in this ride services setting on Google Maps. 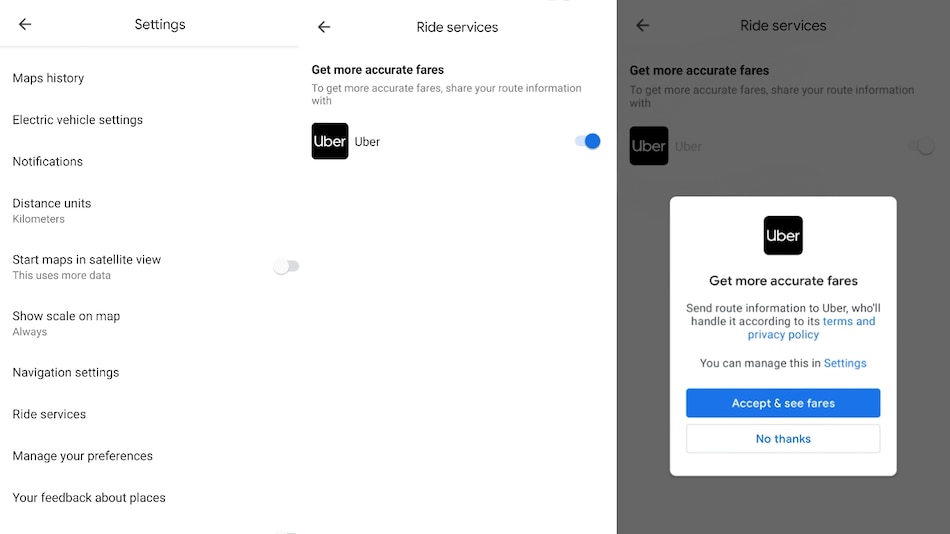 Google Maps' latest beta introduces a new menu entry called ‘Ride Services' in the settings of the app, as per a report. This setting will help get more accurate fare, by sending route information from Maps to the ride-sharing company. Uber seems to be the only supported partner in this ride services setting, but this may differ across regions and as the app develops further. The latest beta brings the app up to version 10.56.0.

The new Ride Services menu entry on Google Maps was first reported by Android Police. The feature, available in beta version 10.56.0 of the app, may still be in development stages, as the report mentioned that there weren't any differences in prices when comparing ride-sharing results before and after activating the option. The price range was still large and not specific.

Citing tipsters, the report noted that the latest beta version of Google Maps has also added building numbers and crosswalk markings for them. This could be a part of a server-side change available for limited cities that could roll out on earlier versions of Maps, for some. Screenshots in the report show that you can spot the building numbers and crosswalk markings by zooming in on streets in cities such as New York.

To become a tester eligible for Google Maps beta, you can join here.

Meanwhile, Google Maps has introduced a new community feed in the Explore tab of the app that brings the latest reviews, photos, and posts of events and places near you, which are offered by people and businesses you follow. The community feed aims to make it easier to discover things to do and places to go in a particular area. It takes into account your interests and offers you content tailored to it. The new feature is rolling out globally to Android and iOS devices.