The updated Messages app will be rolled out to Android users in the coming weeks. 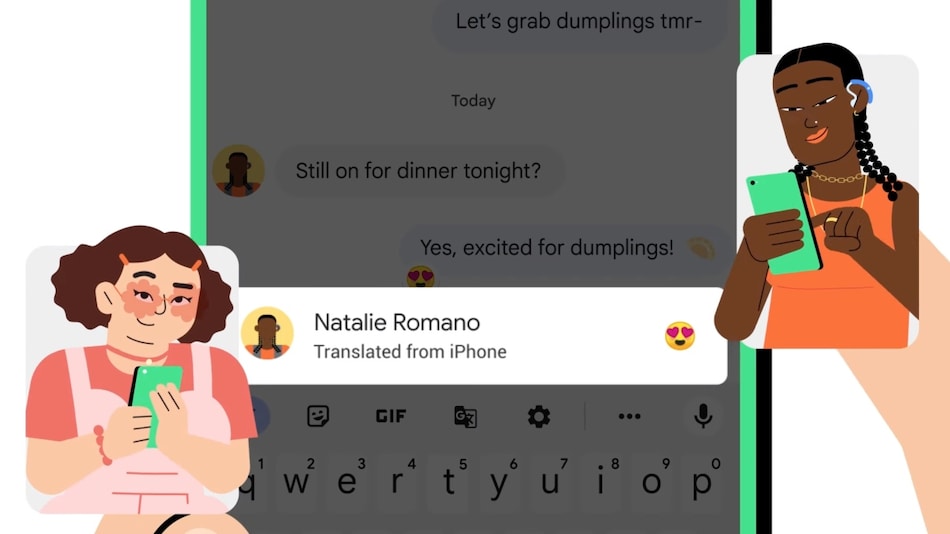 Google is rolling out an updated Messages app that displays reactions from iPhone users on your Android phone as emojis. The update also enables users on an iPhone to receive high-quality photos and videos from Android devices through Google Photos links. Further, the updated Messages app organises your message inbox by automatically sorting your messages into distinct Personal and Business tabs. It also nudges you to reply to messages you have missed or even remind you to wish your loved ones a happy birthday.

The latest Messages app update, which is rolling out to Android users over the coming weeks, brings the ability to display reactions from iPhone users as emojis. This means that if your friend on an iPhone has reacted by long pressing on your message, you will be able to see that reaction directly on your Android phone as an emoji. You can tap the reaction to see that it has been translated from the iPhone.

Initially, Google was spotted testing the feature with a small group of users last month. It essentially bridges the gap between iPhone and Android users, though there are still many differences that need to be worked on.

Google said that reactions are currently available on devices set to English, with additional languages to follow.

Another big change that is also aimed at the Apple ecosystem is the option to let users on Messages send photos and videos as Google Photos links to let iPhone users get them in a high quality.

Google's Messages app uses the Rich Communication Services (RCS) standard that is not available on its Apple counterpart. Photos and videos shared over a platform that is not based on the RCS protocol appear inferior. Google has, thus, introduced Google Photos sharing links to Messages to resolve the issue from its end.

The initial experience is limited to videos, though the Android-maker promises to make it available for photos in the coming future.

Google still encourages “Apple to join the rest of the mobile industry and adopt RCS” so that messages can become “better and more secure, no matter what device you choose.”

In addition to the changes focussed on people communicating with iPhone users, the new Messages update brings Personal and Business tabs to automatically sort your messages depending on their content. Users can also set one-time password messages to be automatically deleted after 24 hours to help reduce the clutter even more. This particular change was originally provided to users in India, though it is now rolling out in the US.

The updated Messages app will also give you gentle nudges to remind you to reply to messages that you might have missed or need to follow-up on. It is coming first to users using English language around the globe.

Google Messages will now help you respond to the messages that you might have missed
Photo Credit: Google

Messages will now also remind you to send birthday wishes to your loved ones if their contact details on the your device includes their birth date. Emoji Kitchen on Messages is also getting bigger with over 2,000 new emoji mashups to come as stickers.

Google has also made its Live Transcribe app available offline to let users view speech-to-text captions in real time even when they aren't connected to Wi-Fi or cellular data.

Additionally, Google Photos is adding a Portrait Blur feature for photos with subjects such as people as well as pets, food, and plants. A screen-time widget has also been released to improve your digital habits.

Nearby Share — Google's feature to let you share photos, videos, links, audio files, and even folders between nearby devices — is also getting an update to let you share content with multiple people simultaneously. It is rolling out for all devices that are running on at least Android 6.