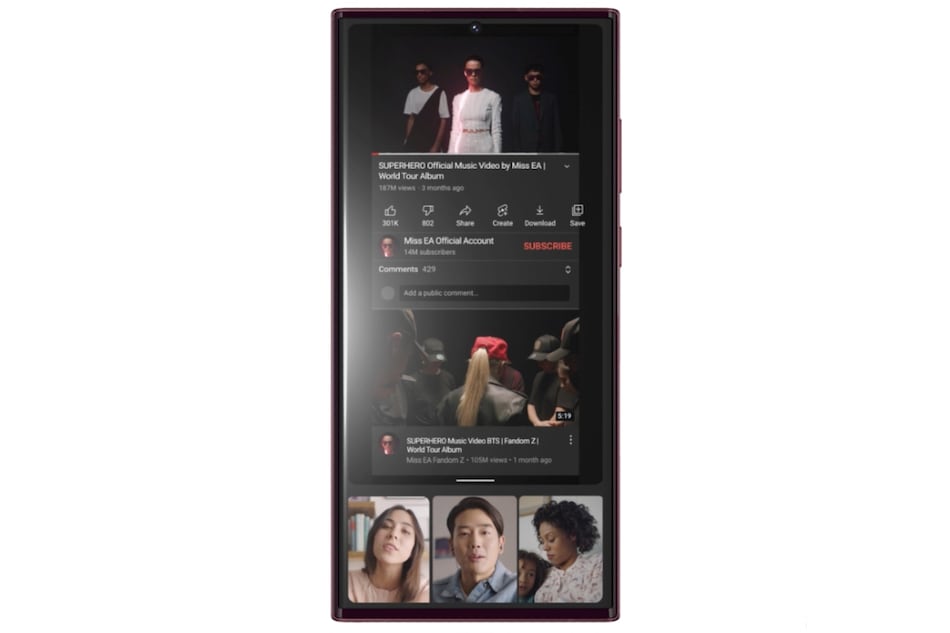 Google and Samsung are on a move to take on Apple's SharePlay feature by introducing live sharing to the video-calling app Google Duo. The feature will debut on the newly launched Samsung Galaxy S22 and Galaxy Tab S8 series where users will be able to watch videos and view an online whiteboard together. The development was announced by Google as a part of the Galaxy Unpacked 2022 event. Samsung's new flagship phones are also getting YouTube previews support in Messages to deliver an upgraded experience.

Using live sharing support, Google said that users on the Samsung Galaxy S22 and Galaxy Tab S8 series will be able to brainstorm ideas on whiteboard app Jamboard as well as share ideas and images in Samsung Notes and Gallery, watch videos on YouTube, or search for locations on Google Maps.

Engadget reports that in addition to the latest Samsung devices, Google Pixel phones will also get live sharing support on Google Duo.

Exact details about which Pixel models will receive the support are yet to be revealed. Gadgets 360 has reached out to Google for this clarity and will update this space when the company responds.

The list of supported apps for live sharing is not long at this moment. However, it certainly shows that Google and Samsung are trying to copy SharePlay that Apple introduced in iOS 15.1 last year.

SharePlay works in the FaceTime app to let you watch movies and shows with your friends on the Apple TV app, listen to your favourite album or playlist on Apple Music, or even send what you are watching through the Apple TV integration.

Interestingly, Google doesn't have YouTube as a part of the apps being supported by SharePlay. It, thus, makes sense for the Android maker to take on Apple with its own offering on at least Samsung devices at the initial stage.

Users who don't own one of the latest Samsung phones or tablets or the eligible Pixel phones will not be able to share their content via Google Duo. However, they will still be able to watch or view the content that has been shared by users on any of the supported devices.

For some time, Google Duo has allowed users on Android 8 and up to share their screen to show photos and videos appearing on their devices with others. The new experience, though, comes as an upgrade as users will get a dedicated live sharing menu when they make a new Duo call on a Samsung device.

Google is also bringing YouTube previews to Messages for the Samsung Galaxy S22 and Galaxy Tab S8 series. This will allow users to preview YouTube videos directly in their conversations to decide whether they want to watch them now or later. If they want to do so now, the users can tap again to play the video, without leaving the chat.

Engadget says that the video preview feature will eventually be available to all Android phones, except the ones based on Android Go.

Google is also upgrading Wear OS for the Samsung Galaxy Watch 4 by improving its setup process and bringing Google Assistant support. Additionally, the Galaxy Watch 4 and other Wear OS devices will be getting Wi-Fi and LTE streaming support to help them listen to new songs even when their phone is not in proximity.