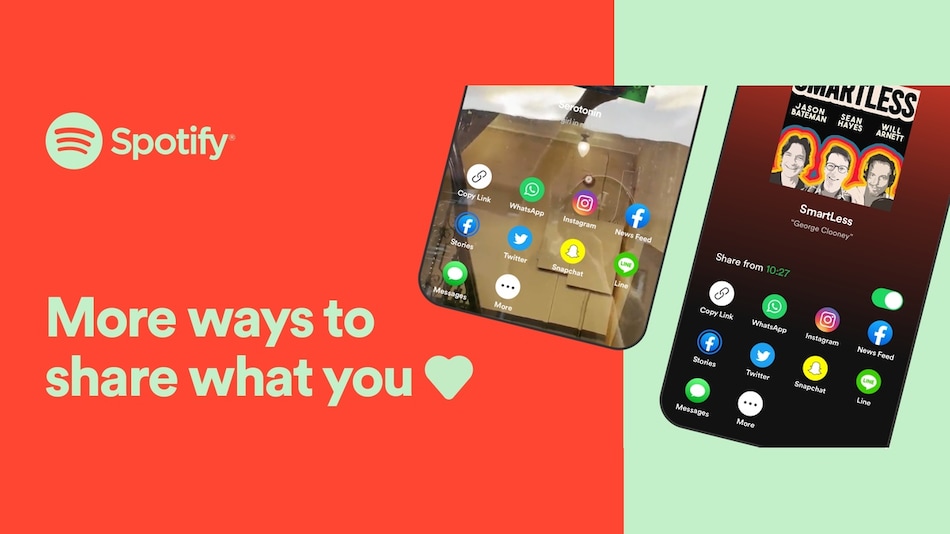 Spotify has announced three new features that will aid users in easier sharing of music and podcasts on the social media. The new features include sharing podcasts starting from a particular moment. Alongside, the music streaming service will also start letting users share music with Canvas on Snapchat and an updated sharing menu on its mobile apps. The update for Spotify was announced on May 10 and will be available for both Android and iOS users. Spotify recently announced another update that changed the UI of Your Library on the mobile apps.

Spotify on Monday announced via a blog post that it is rolling out three new social features for its Android and iOS app users. “We're constantly evolving the Spotify experience to meet listener needs and working to provide the best possible audio experience for listeners around the world,” read the blog post. “Beginning today, we're making it even easier to share your favorite track or podcast episode with your friends through your social media channels,” it added.

Spotify will now let users share podcasts beginning from a particular moment. Users will be able to share a podcast with a timestamp so their friends or family can jump into the podcast at the moment the user intended them to listen to. Earlier, users were only able to share an entire podcast and the recipients would then have to manually forward to the intended part of the podcast. Now, recipients will just have to click on the link to jump right to the intended moment.

Alongside the podcast time stamp feature, Spotify will now let users share music with Canvas on Snapchat in addition to Instagram stories. The Canvas feature on Spotify turns static song/ album art into eight-second visual loops. The music streaming service also announced that it will let users preview the Canvas before they share on Instagram stories or Snapchat. The Canvas feature, however, isn't available in India as of now. Gadgets 360 has reached out to Spotify to comment on when it may be launched in the country. Alongside, Spotify has reorganised the messaging and social media apps on the sharing menu based on the usage and will be laid out in a grid view.

In other Spotify-related news, the music streaming service has a new layout for the Your Library page on its mobile apps. The update brings changes such as a grid view, dynamic filters for search, improved sorting, among other new features.

Facebook to Prompt Users Before Sharing Unread Links to Curb Spread of Fake News
Asus ZenFone 8 Price Surfaces Ahead of May 12 Launch, Could Start at EUR 700