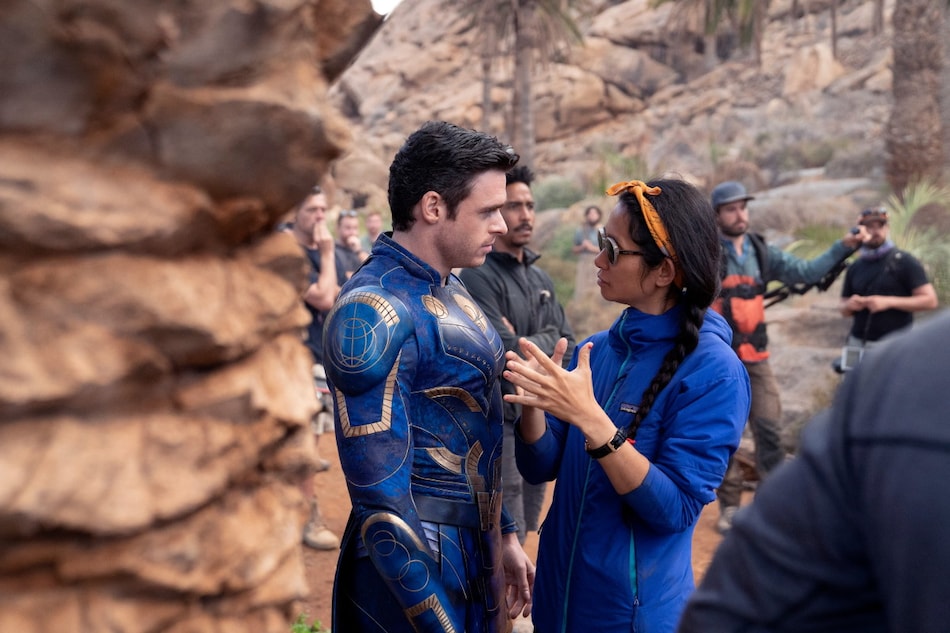 Richard Madden and Chloé Zhao during filming on Eternals

Eternals is three-and-a-half weeks away from release, and its Oscar-winning filmmaker Chloé Zhao has spoken about her inspirations and her approach to the next Marvel movie in a new interview. Zhao uses the word “grounded” a lot, noting that she wanted these immortal beings to feel both fantastical yet grounded. As for what they watched on repeat while making Eternals, Zhao and the team at Marvel looked at films by directors such as Christopher Nolan, Stanley Kubrick, Terrence Malick, Denis Villeneuve, Alejandro González Iñárritu, and Ron Fricke.

“I would say I pay tribute to many films and filmmakers that had great influence on me in this movie. It becomes fanfare for me,” Zhao told Fandango. “I try to let them inspire me in different parts of the movie because the film is so diverse, visually. I could do a lot of different things.

“Particularly with the team at Marvel — our visual effects team, the action units, the design teams — we watched [Terrence] Malick films, particularly The Tree of Life and The New World. We watched [Iñárritu's] The Revenant a lot, and [Nolan's] Interstellar a lot.

“We watched [Villeneuve's] Blade Runner 2049 and a film called Samsara [by Fricke]. We watched that a lot. Obviously [Kubrick's] 2001: A Space Odyssey was very important, too. These were the films we had on repeat, and of course, there's many other things in my life that I've watched that snuck into it.”

As with any director wanting to make a Marvel movie, Zhao delivered an extensive Eternals pitch to Marvel Studios president Kevin Feige. It began with a photo of sand and a William Blake poem. Zhao says it was a “very long pitch”.

“What drew me to this movie and why they hired me, I think, is that the visual experience for this film must feel immersive enough for the audience to believe that these superhero characters have walked the earth for 7,000 years,” Zhao added.

“To do that, there's what I like to call an anthropological way of capturing things. The cameras are very grounded, and the movements are very natural. Shots are longer — we use wide angle lenses, and deep focus.” Similar to what Zhao did with her Oscar-winning movie Nomadland.

“It's about giving the audience the space and the time to be able to explore what's within the frame, and therefore come to their own conclusion of the relationship between the characters and the space they're in,” Zhao said.

“In this case you're going throughout history and 7,000 years” — that's how long the Eternals have been secretly living on Earth — “[and so it's] even more important to make us feel like this world feels real and grounded,” she added.

“I wanted to apply that same digital style to everything from action, visual effects, to also capturing the grand mythology of the Celestials [who created the Eternals] in the cosmos, and the consistency of that. I wanted it to feel grounded yet fantastical.”