Spoilers ahead for House of the Dragon episode 3. 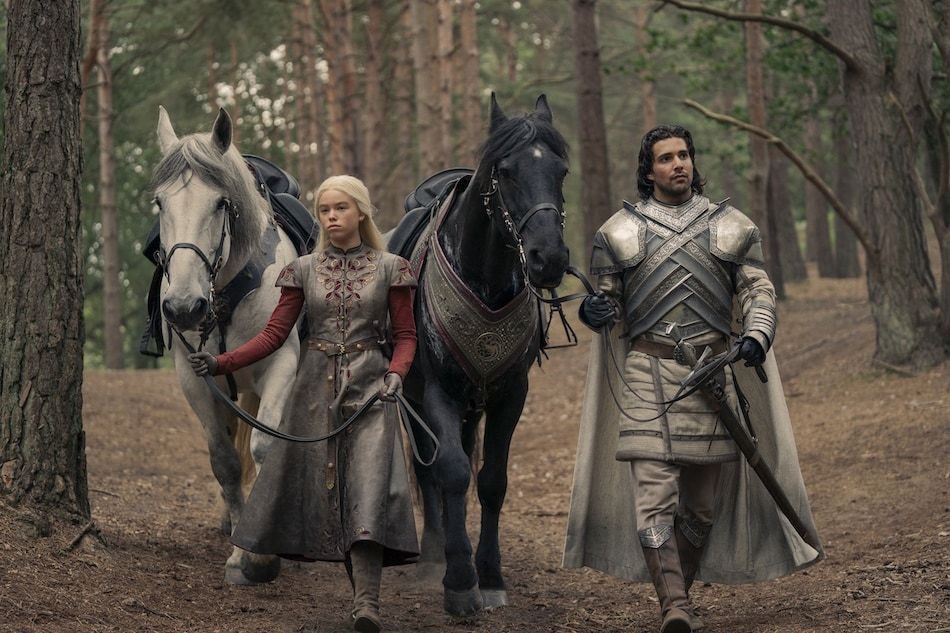 House of the Dragon episode 3 — out now on HBO Max and Disney+ Hotstar — is occupied with male privilege and marriage proposals, for the most part. While Princess Rhaenyra Targaryen (Milly Alcock) spent a bulk of the second episode asserting herself, a literal two-year-old is now overshadowing the heir. It's Prince Aegon, the first child of King Viserys (Paddy Considine) and now Queen Alicent Hightower (Emily Carey), who's pregnant with a second. (Given the boy's age, you can tell it's been roughly three years since episode 2.) A feast and a hunt have been organised in Aegon's honour, which is good for the audience as the Game of Thrones prequel series finally leaves King's Landing for nearly a full episode — we only get so far as the Kingswood though — and it feels good!

This gives House of the Dragon episode 3 the opportunity to craft a mini-getaway for two characters, Rhaenyra and her bodyguard, Ser Criston Cole (Fabien Frankel), as the crossed Princess runs into the Kingswood. (This was arguably the best part of Game of Thrones, as characters at times with polar opposite views paired up for unexpected journeys.) Rhaenyra is not okay with the attention being poured on Aegon, especially because like everyone else, she expects her father to name the infant the new heir as he's the firstborn son. Even the episode 3 title belongs to him, “Second of His Name”. A gender-neutral naming might've been smarter, in my opinion, as it would've signalled how Rhaenyra feels right now.

She might be first in line to the Iron Throne, but there's a feeling around court that Aegon now has the stronger claim simply because he has a penis. And for Rhaenyra, it's a triple blow of sorts. She hasn't just lost her hold on the crown, but also Alicent and her father. Viserys and Rhaenyra haven't seen eye to eye ever since he married her best friend — I mean, that makes sense — and that gap further widens on House of the Dragon episode 3 after she learns that the King is also shopping her around.

“You must marry,” Viserys shouts at her daughter in front of everyone on House of the Dragon episode 3, soon after Rhaenyra discovers that the arrogant and self-serious buffoon Jason Lannister (Jefferson Hall) — he's the Lord of Casterly Rock, but they do not hold as much power in this era as the Lannisters we've known from Game of Thrones — was only engaging her in conversation because he wants to “take” her as his “lady wife”. That, in combination with the rest, is enough to send Rhaenyra into the woods.

While the first proposal was sanctioned by the King himself, the Hand of the King, Ser Otto Hightower (Rhys Ifans), is bold enough to present the second on House of the Dragon episode 3. Otto tells Viserys that he should get Rhaenyra married to Prince Aegon, the babe. (While this might seem odd given they are step-siblings, marrying within your family was pretty common for the Targaryens, as it was royals of old in our world. It was done in the name of maintaining the purity of their blood.) But the sheer age difference — Aegon is two while Rhaenyra is 17 — is enough to send Viserys into fits of laughter. Otto clearly has ulterior motives, as that would make his grandson King Regent, or even King.

And hence, when a third marriage proposal comes from Viserys' Master of Laws and Lord of Harrenhal, Lord Lyonel Strong (Gavin Spokes), the fed-up Viserys believes he's in it for himself too. Let me guess, you're going to suggest Rhaenyra marry your own son, the King says in as many words on House of the Dragon episode 3. But turns out, that is not the case. Lyonel proposes that Rhaenyra be paired with Ser Laenor Velaryon (Theo Nate), the son of Princess Rhaenys “The Queen Who Never Was” and Lord Corlys “Sea Snake” Velaryon, who's briefly seen when we shift to the Stepstones in House of the Dragon episode 3. Building on his ignored advice from episode 2, Lyonel posits this would help bridge the gap between the two old Valyrian houses.

The visibly-inebriated Viserys gives Lyonel a pat on the shoulder as he walks away, suggesting bigger things in store for the man who isn't solely interested in raising his station.

House of the Dragon Episode 2 Review: Old Makes Way for the New

As Viserys steps outside, his young wife Alicent joins him. And for a brief moment, he breaks. Though he's taken up and reiterated the public position that Rhaenyra will be his heir — he reprimands Jason Lannister for “assuming” that Aegon would take her place, and strongly notes that he didn't pick his daughter on a whim — Viserys confesses to Alicent that it was at a time of weakness, when he thought he had lost everything. “What if I was wrong?” Viserys wonders to himself. Later in House of the Dragon episode 3, as he swears to Rhaenyra that she won't be supplanted, the King admits that he wavered at one time.

Still, Viserys has essentially given Alicent ammunition for later, I might argue. And Alicent has a stake in it too. As her father Otto points out on House of the Dragon episode 3, if Rhaenyra gets on the throne, it's not going to be a nice life for the challenger (Aegon) and his mother. Alicent's cause — or rather Otto's, for now — is helped by the fact that everyone around Viserys either assumes or expects him to name Aegon as his heir sooner rather than alter. But Viserys clearly desires to stick by his choice. While Rhaenyra felt he was spurning Daemon and not choosing her, as she confided to Alicent on episode 2, it now seems she was wrong to think so of her father.

Viserys even cares for Rhaenyra's happiness, as he first tells Otto, before reiterating in as many words to the daughter. Everything that's been happening all episode in “Second of His Name” — the widening gap between the King and his heir — comes to the fore as Rhaenyra walks in and confronts her father, just as he's sending off men to help Daemon and Corlys in the Stepstones (on the Queen's advice). Rhaenyra believes that Viserys wants to marry her off for a watchtower or a fleet of ships. The King notes that he wants her to marry to shore up her succession. But when Rhaenyra points out that he didn't re-marry for advantage, Viserys admits it before telling her to seek her own man out, the person who will keep you happy and strengthen your claim.

In that moment, the broken bridge between father and daughter is seemingly restored on House of the Dragon episode 3. A smiling Rhaenyra, comforted by the fact that the King is not going to replace her and cares for how she feels, walks away.

Everything You Need to Know About House of the Dragon

Speaking of strengthening one's claim, the last section of House of the Dragon episode 3 is devoted to Daemon (Matt Smith). It's been three years since the troubles in the Stepstones began. Daemon the Rogue Prince has been laying siege to the Crab Feeder with the help of his dragon Caraxes, but the caves are keeping them safe. What began as an attempt to make Daemon look worthy in the eyes of Westeros lords, is starting to look like a failure. On top of that, Viserys' meagre helping hand comes as an affront to Daemon. He wanted this war to stand as his own victory, and not something that the Crown could claim for itself.

With troop morale at a low, Daemon's new strategy — first brought up by the bickering Velaryons — is to surrender himself to the Crab Feeder (Daniel Scott-Smith) on House of the Dragon episode 3. The disfigured Prince-Admiral knows that this might be a tactic: to get his men to leave the caves in a false sense of security. That's why he watches for dragon movement before ordering his troops to bring in Daemon. But he didn't wait long enough, it seems. Just as the Crab Feeder feared, Caraxes shows up at the very last minute, with a Velaryon riding it. With the help of the dragon and the Westerosi forces, the Crab Feeder's men are laid to waste — before he himself pays the ultimate price at Daemon's hands.

The Rogue Prince may have conquered an enemy in battle, but how will he deal with the twin threats of the heir and the firstborn son?

House of the Dragon episode 3 is now streaming on Disney+ Hotstar in India, and HBO Max wherever available. New episodes release every Monday at 6:30am IST/ Sunday at 9pm ET.

Vivo X Fold S Tipped to Launch As Vivo X Fold Plus, May Sport Quad Rear Camera Setup: All Details
Cross-Chain Bridges: What Are These and How Do They Work?