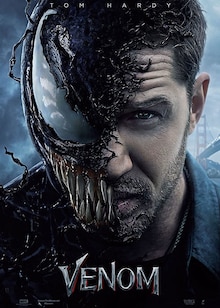 A struggling journalist, Eddie Brock (Tom Hardy), is trying to take down Carlton Drake (Riz Ahmed), the notorious, genius inventor and leader of the Life Foundation who is experimenting on symbiotes.

During one of Drake's experiments, Eddie gets bonded to an alien entity, Venom, one of many symbiotes species who have invaded Earth, leaving him with remarkable superhuman strength and power. Fond of Earth and Brock, Venom helps him protect it with his dangerous abilities, which Eddie finds very intoxicating. One of the many problems with Tom Hardy-starrer Venom — the Spider-Man spin-off with which Sony hopes to kick off its own Marvel universe — is that it spends too much time in bringing the titular symbiote to life. Voiced by Hardy in a loud, computer-modulated growl — and assisted by the goofy humour opportunities that the script provides in doses — Venom certainly has the potential to make for a good slapstick superhero movie, in the vein of Deadpool or Thor: Ragnarok. But the film has to also tackle the comic book's horror aspects, so it's good that Zombieland director Ruben Fleischer is at the helm. Unfortunately, Venom fails to do both well.