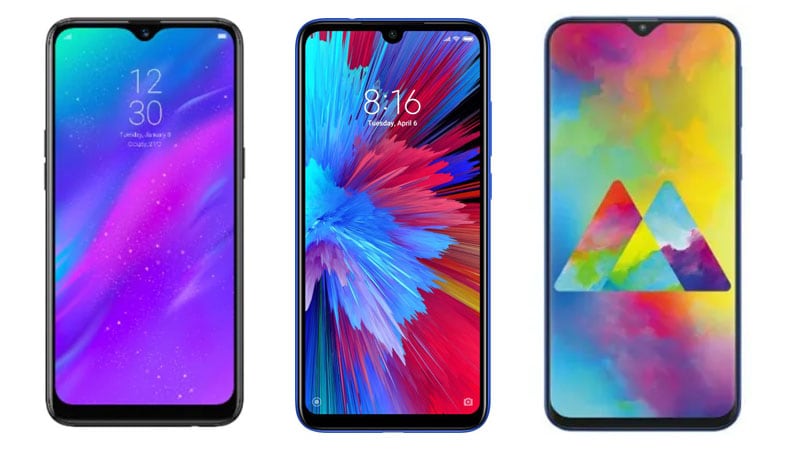 Realme 3 has finally been launched in India, and it comes with a dual rear camera setup, a Helio P70 SoC, a 4,230mAh battery, and a starting price of Rs. 8,990. The phone's first sale is set for March 12 on Flipkart and Realme website, and the phone will compete with the likes of the Redmi Note 7 and the Samsung Galaxy M20. The Realme 3 has been made available in three colour options, and the company has even announced a few launch offers for the phone. In addition to the Realme 3, the company revealed that it is also planning to bring a new Realme 3 Pro smartphone to the country.

We pit the Realme 3 (Review) with the Redmi Note 7 and the Samsung Galaxy M20 to see which of the new entrants fares better on paper. All three phones - Realme 3, Galaxy M20, and Redmi Note 7 - have at least one variant priced under Rs. 10,000, and come with similar features.

The Realme 3 price in India has been set at Rs. 8,999 for the 3GB RAM + 32GB storage option and Rs. 10,999 for the 4GB RAM + 64GB storage option. The phone will be made available in Dynamic Black, Radiant Blue, and Black colour options on Flipkart and Realme website exclusively. The first sale (only Dynamic Black and Black colour options) will be held on March 12 at 12pm (Noon) IST, and Realme says that the 3GB RAM variant price tag is part of an introductory offer for the first 1 million buyers. The Radiant Blue variant will be available from March 26, and it will be available via offline stores soon.

Launch offers include instant discount of Rs. 500 on HDFC Bank cards, Jio benefits worth Rs. 5,300 on Flipkart, and 20 percent SuperCash on MobiKwik if purchased through the Realme website. A Realme 3 Iconic Case will also be made available, in Black, Diamond Blue, and Yellow, priced at Rs. 599.

Xiaomi has priced the Redmi Note 7 starting Rs. 9,999 for the 3GB RAM+ 32GB storage version. The 4GB RAM + 64GB storage model will carry a price tag of Rs. 11,999. According to the company, it will be offering the Redmi Note 7 in three colour options - Onyx Black, Ruby Red, and Sapphire Blue.

The first flash sale of the smartphone is scheduled 12pm IST on March 6. The phone will be offered via Mi.com, Flipkart, and Mi Home stores. It will become available via select offline retail chains "soon". As for launch offers, an "ultra-slim" case will be bundled, while a perforated case will be available for Rs. 349. Airtel will be offering up to 1,120GB with unlimited calling, as well as Airtel Thanks benefits like free access to Airtel TV premium, App advisor, Spam Block, Contacts Backup, and more. Additionally, the Redmi Note 7 owners will also get double data benefits on all recharges of Rs. 198 or above on Reliance Jio.

The Galaxy M20, on the other hand, is available at Rs. 10,990 for the 3GB RAM + 32GB storage configuration, while its 4GB RAM + 64GB storage version will go on sale at Rs. 12,990. Both Samsung Galaxy M-series models are on sale through Amazon.in and Samsung India e-Store. The new phones will come in Charcoal Black and Ocean Blue colour options. As an introductory offer, Jio 4G customers buying the Galaxy M-series models are entitled to receive "Double-Data" on Rs. 198 and Rs. 299 recharge packs.

Coming to the camera, the Realme 3 packs a dual rear camera setup aligned vertically - with one 13-megapixel rear sensor with an f/1.8 aperture, apart from the 2-megapixel secondary sensor. Features include PDAF, Nightscape mode, Hybrid HDR, Chroma Boost, Portrait Mode, scene recognition, and more. Up front, there is another 13-megapixel sensor with an f/2.0 aperture and 1.12-micron pixels, apart from features like AI Beautification, HDR, and AI Face Unlock.

The Redmi Note 7 features a dual camera setup on the back that houses a primary 12-megapixel sensor (with 1.25-micron pixels) with a secondary 2-megapixel depth sensor. There is a 13-megapixel front shooter on-board as well. The company claims that the camera app on the Redmi Note 7 uses artificial intelligence (AI) to offer a better portrait mode, smart beauty features, and scene recognition support.

On the Samsung Galaxy M20, there is a dual rear camera setup along with a 13-megapixel primary sensor - sporting an f/1.9 aperture and a 5-megapixel ultra-wide sensor. An 8-megapixel sensor along with an f/2.0 aperture is available at the front.

The Samsung variant wins the battery battle with a 5,000mAh battery pack. The Realme 3 and the Redmi Note 7 phones pack 4,230mAh and 4,000mAh batteries respectively. Samsung and Xiaomi offer USB Type-C port and the Realme 3 integrates a Micro-USB port. All the phones supports dual-SIM cards and feature a 3.5mm audio jack.