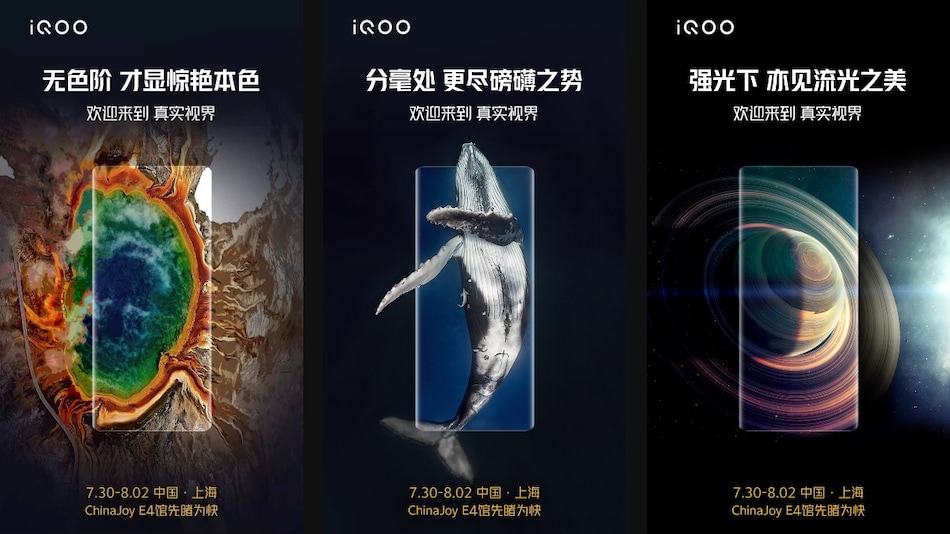 iQoo has been sharing images of phones displays on Weibo

iQoo 8 series of smartphones may come equipped with an E5 display with a 2K resolution. The LTPO displays with 10-bit colour are said to feature a 120Hz variable refresh rate. The news comes a few days after the Chinese company hinted that it might showcase the upcoming smartphone series at the ChinaJoy event, which is scheduled to take place from July 30 to August 2. It has since been teasing the smartphone on its official Weibo account.

Apart from giving details about the display technology of the rumoured iQoo 8 series of smartphones, the tipster Panda is bald (translated) also shared an image of the smartphone that does not show any cutout for the front camera. iQoo has already started teasing “new surprises” at the iQoo booth for the upcoming ChinaJoy event. It has also been sharing images that look a lot like the display of a smartphone.

Recently, iQoo President Feng Yufei shared a video on Weibo showing a pool table with a ball with the number eight hitting and sinking a ball with the number four. It is being reported that the video hints that the new iQoo smartphone is coming on August 4. Additionally, tipster @Whylab also stated that the iQoo 8 will launch on August 4 and it will be the first Snapdragon 888 Plus-powered phone.

The specifications of the alleged iQoo 8 smartphone were also leaked by tipster Digital Chat Station (translated). The tipster claimed that the iQoo 8 has model number V2141A and the display may offer 1,440x3,200 pixels resolution. The phone was tipped to be powered by a Snapdragon 888 Plus SoC, 12GB of RAM and 4GB extended memory, and 256GB of storage. It is said to run OriginOS 1.0 based on Android 11 at launch.

Cyberattacks on Organisations Up by 29 Percent in Last 6 Months, India Among Most Affected Markets: Check Point