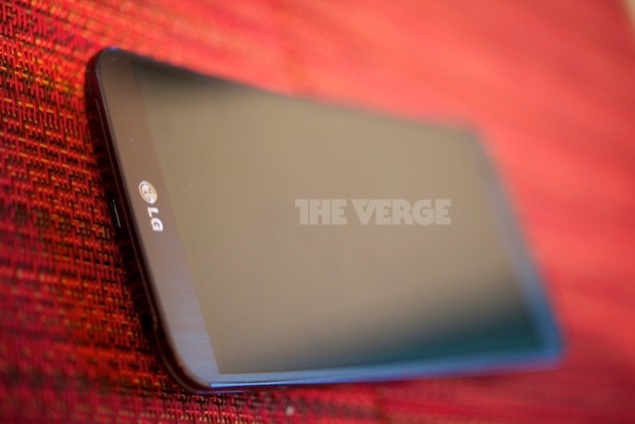 More details appear to have been leaked regarding LG's first curved display smartphone, rumoured to be called the 'G Flex'. This time, it comes in the form of live images and a hands-on video posted by technology journalist Frederico Ini of Telefe Noticias, who seems to have received a prototype unit. The Vergespotted the images first and claims that it received some information about LG's upcoming curved display smartphone from Frederico as well.

As per the site, the yet to be officially announced LG 'G Flex' smartphone is curved from top to bottom, unlike Samsung's Galaxy Round which bends from sides and is being said to come with 6-inch curved OLED display. Further the device sports LG's signature design which means it comes with rear-mounted physical buttons for power and volume controls, much like company's flagship smartphone, the LG G2. The site suggests that the smartphone is likely to sport a 13-megapixel rear camera, again similar to the LG G2. The video reveals that the LG 'G Flex' would come with similar features as found in other LG's high-end smartphones.

The latest leaked images and video suggest that the launch of the LG 'G Flex' is not far and LG might soon join Samsung with the launch of its first curved display smartphone.

Last week, a report revealed that LG, in an attempt to gain both technological and market leadership, will launch its first smartphone mounted with curved display next month. The report claimed that the curved display smartphones are being developed according to their release schedules.